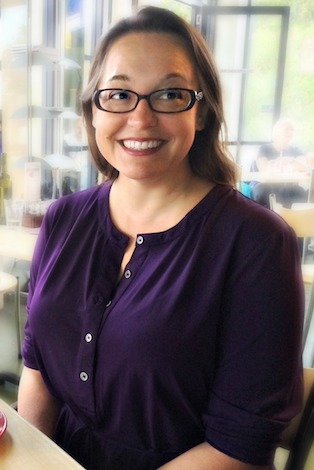 It’s not every day that resurrected road kill graces the cover of a book. But when it does, chances are Jenny Lawson wrote it. If you’re one of her nearly half-million Twitter followers, have read her No. 1 New York Times bestseller, Let’s Pretend This Never Happenedor frequent her award-winning blog, this comes as no surprise to you. Lawson, who is more widely known as The Bloggess, loves taxidermy. But when I first saw Rory, the jubilant, animated raccoon on the cover of her new book, Furiously Happy, I was certain his face had been significantly altered by computer graphics. Turns out the “real” Rory got an after-death facelift from Lawson’s friend Jeremy Johnson (whom she calls an artist and “ethical taxidermist”—working only with road kill or animals that have died of natural causes). So the book cover is a pretty accurate rendering of Lawson’s prized coon.

“Jeremy sent me a picture of Rory and I was like, ‘That is my spirit animal. That is my Patronus,’ ”says Lawson.  “This raccoon is the embodiment of furiously happy, because he's dead but so happy! It's perfect because he is so broken but at the same time ready to make you laugh. And that's life right there. Broken but still so full of potential and excitement and horror and wonder and beauty all at the same time.”

Lawson has long been known for writing candid, sidesplitting prose about her ongoing battle with mental illness. But one particular day in 2010 she got so fed up with the blues and bad news, something in her shifted.

“I had been struggling with a very, very deep depression, which was chemical,” says Lawson, “and then it was made worse by a lot of really terrible news. I had been sad and upset for so long that I just got angry, like mad that I had to deal with all of the bullshit life pushes at you. And I basically said, ‘If you're gonna have to be sad for a certain amount of time, particularly if you deal with depression or any kind of mental illness, then when you're happy you should pull it toward you 100% and do every ridiculous thing possible. Those moments, when you're extraordinarily happy and you throw yourself into life, those are the moments that you bring back with you when you fall into the next depression.”

Lawson wrote a blog post about her resolve to have “irrational joy,” referenced it on Twitter using the hashtag #furiouslyhappy and within hours it was trending worldwide. She says she’s found her tribe in cyberspace, particularly on her blog. But she’s also a big fan of Twitter, which she calls “one of the greatest group therapies that ever existed.” The Texas native counts herself lucky that she lives in the age of social media, because it serves as a sort of virtual living room, where people who ordinarily feel on the fringe can congregate and move toward the center.

“A lot of times I'll be at a conference and I cannot leave my hotel room,” says Lawson, who has written extensively about her own social anxiety and introversion. “I am stuck. And so I'll get on Twitter and talk to people about it. Instead of being in a room with 35 people, I'm having this conversation with 100,000 people who are saying, ‘I'm having the same thing! I'm hiding from my conference.’ [Social media] is such a strange, odd, wonderful way of sort of re-appropriating your life, and saying, ‘I love to talk to thousands of people, but I need to be able to run away at any time.’ ”

According to Lawson, being furiously happy isn’t about trying to eradicate mental illness with a hashtag and a proclamation. It’s a rebellion of sorts, a personal uprising against the idea that mental illness—or even any other kind of illness or loss—equals a lifetime of sorrow and solitude. Yes, she knows that depression, anxiety, and the other assorted sub-diagnoses she’s accumulated over the years will probably be with her for life. And though she says they’re hell when flaring, she wouldn’t do away with them altogether because they’re an intrinsic part of who she is. But being furiously happy on the good days generates stores of hope that help her get through the bad ones.

“Then you’re able to say, ‘I'm gonna get out of this, and I'm going to eventually jump into fountains that you're not supposed to jump in to,’ ” says Lawson. “And I'm going to stage a live zombie apocalypse in a crowded conference center, and I'm going to do all these ridiculous, crazy things as soon as I'm able to get up off the couch again.’”

Laura Jenkins is a writer and photojournalist based in Austin.
MORE FEATURES
POPULAR KIRKUS STARS