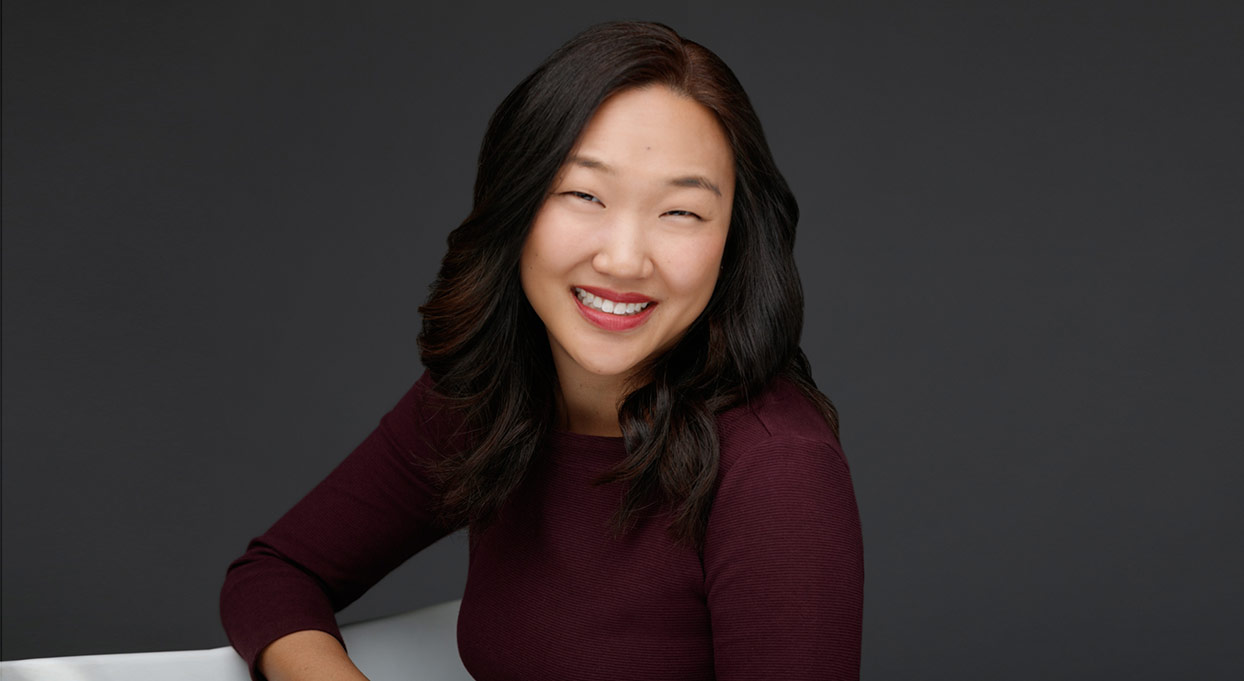 “What would be an Asian mom’s worst nightmare?”

That’s what author Jessica Kim asked herself when dreaming up her debut middle-grade novel, Stand Up, Yumi Chung! (Kokila, March 17), which follows the titular heroine as she works up the courage to defy her parents and follow her dreams of becoming a stand-up comedian. Stand-up comedy is definitely far down the list of career paths most practical-minded parents consider ideal, let alone hardworking Korean immigrant parents like Yumi’s. They discourage Yumi from wasting time filling her Super-Secret Comedy Notebook with jokes in favor of improving her test scores at a Korean test-prep boot camp. But when an opportunity to attend a kids’ comedy camp presents itself, Yumi jumps at it—even if it means stealing another girl’s identity. Jessica Kim talked to Kirkus about what went into creating an aspiring middle school–aged Korean American comedian and what Yumi taught her about taking creative risks.

How did you decide on comedy as the passion Yumi wants to pursue?

The first iteration of this was a young adult novel about this girl Minji who wanted to be a chef….I wanted her to do something outside of the usual doctor/lawyer/engineering path. I queried that version, and all the agents essentially said it read young, so I reconceived it. I wanted to keep this theme, but how do I make it work for an 11-year-old reader? I’d just seen Ali Wong, and she was getting big around that time, and I’m a big comedy fan, but I’d just never put the two together. I’d labored for a year and a half working on my YA, but when I switched it to middle grade and switched it to comedy, Yumi’s voice wrote itself.

You not only have Yumi writing jokes, but also have kids performing jokes with varying levels of success. How did you hit so many levels of kid comedy?

I spent so many years day in and day out teaching [third, fourth, and fifth grades], so I know what kids that age think is funny. Their humor is more individual, whereas adult comedians make jokes that are more societal or global. Middle graders are still figuring out their bodies and their friends so you have to narrow it in. Eventually, when I go on school visits, I want to bring notebooks to show kids. Comedy is a process, it’s an art, just like writing is. You have to do it a thousand times wrong to get closer to right!

Yumi’s mom might seem to fit a few Korean-mom stereotypes but not exactly. How did you find that level of nuance with her?

I wanted to overturn the stereotype of the Tiger Mom. I’m so sick and tired of all the ways we’re ever portrayed, especially women my age. In the early drafts, she spoke without an accent and spoke perfect English…but that didn’t ring true either. I was trying too hard to counter what you think I’d do. I rewrote her again, and I wanted to make her really silly and funny so Yumi had learned comedy from her, but that didn’t work, either. I eventually decided: I’m going to write the Tiger Mom, but when you see her in Chapter 1, you’re going to think you know her. But by the end of the book, you’re going to weep with her. Hers is a different dialect of love than you see in Western media, but it’s just as real.

Absolutely. I joined the Society For Children’s Book Writers in my local chapter, San Diego. It took me 15 minutes to get out of the car because I was so nervous and had to convince myself to go and not just drive home. When people asked if I’m a writer, I couldn’t say yes because I hadn’t written anything yet, and I felt like such an imposter. There’s something about growing up Asian and needing validation and needing a degree, needing a job title. That was always the most difficult part: believing in myself even though I didn’t have the credentials….But I got plugged into the writing community, and the dream just got more tangible, manageable. It became less of a “Power Ranger” dream and maybe more something I could do.

Stephan Lee is a writer in New York.