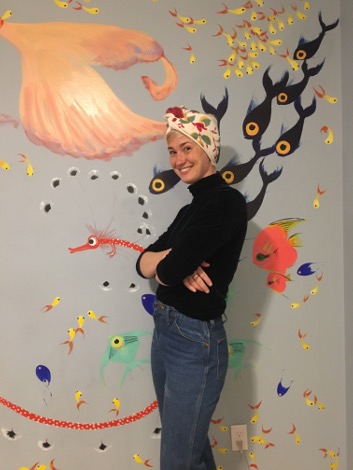 Jessica Love wondered, and subsequently researched, what kind of trans literature was available for children. What she found were books that leaned toward “teach-y” and “prescriptive” formats, so when writing and illustrating her debut picture book, Julián Is a Mermaid, she responded by creating a story that read like a “big, beautiful welcome home party.”

At first, the story came to her as a visual illustration, entirely wordless, but it was fundamental that readers know that Julián was born a boy. Love intentionally points out that she uses the pronoun he when referring to protagonist Julián to avoid confusion. She clarifies, “You'd have to ask Julián how he identifies—it will be different for every reader.”

There were numerous certainties in creating the book: She knew Abuela and Julián were Afro Latin; she knew there was Spanish in the book; she knew Julián's first encounter with the mermaids—whose appearances make manifest Julián’s sense of self—would be on the subway; she knew there was a strong, matriarchal presence with a wide difference of age (hence Abuela); and she can’t say why, but she conjured both Abuela and Juliánfully-formed, and they were never another identity.

Love drew the book, beginning to end, three times. Halfway through the third draft, she asked her publisher to switch from white paper to brown craft paper: a big, bold change. Her reasoning: “[There is] stylistically a lot of negative space in the book. Something looked wrong about having these beautiful, brown-skinned characters on white-white pages,” she says. “They were lost in an echo chamber. The pigmentation was off on the white paper, and the contrast was too high.” Love sought the neutral skin tones to complement the brown pages. It’s an effective decision.

Love, who enjoys swimming laps, embraces water as a transformational element. She feels that there is a private quality to water—you’re not pressed down by gravity in water, sounds are different, hair floats in water, and you’re quite cognizant of being immersed in a different element. Water, in the book, has similar transformative, magical, life-giving properties. In her research, Love also spotted an interesting theme or pattern with families that have trans children (or who identify somewhere along the spectrum): Kids have preoccupations with mermaids. “There could be a number of reasons, one being that a mermaid is a being that doesn’t have to deal with gender because of their tail,” Love says. Because of that association, she uses the event of the annual Mermaid Parade in New York as a catalyst.

If there is a cliffhanger in Julián Is a Mermaid, it’s meant to be the instant when Julián isn’t sure about how Abuela will react to seeing him dressed as a mermaid and in makeup. It was essential that there be a second of doubt. Love wanted that moment to function as genuine suspense, when the reader can almost see a risk for shame to darken the spread. But instead, the scene is met with affection, acceptance, and joy. Abuela—who understands that in some ways his life may be a harder one and chooses to embrace the difficulty nonetheless—gives Julián the tools he needs to most be himself.

Sara Ortiz is the program manager at the Believer Festival.