We talk to the creators of TWO PROBLEMS FOR SOPHIA 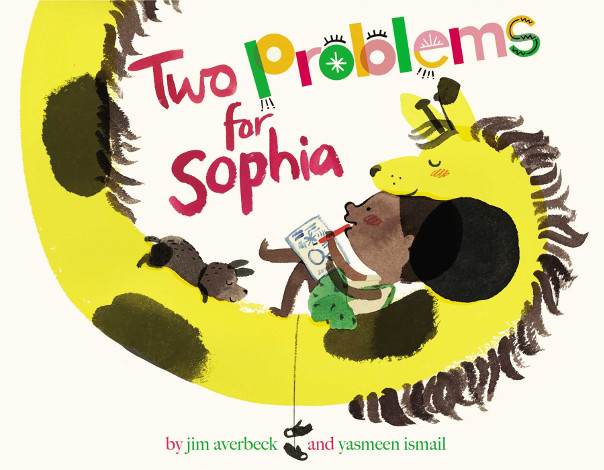 There was just one problem when Jim Averbeck and Yasmeen Ismail’s picture-book debut, One Word from Sophia, became a smash hit in 2015: Bold, intelligent birthday girl Sophia had already achieved her “One True Desire,” a pet giraffe named Noodle.

“My first thought was, ‘OK, we’ve given her a giraffe—now what?’ ” says Averbeck, the book’s San Francisco–based author, in a phone call with London-based illustrator Ismail and Kirkus.

His solution involved a combination of ideas and influences, including: a desire to serve the needs of teachers and promote STEM curriculum; personal memories of first-time pet ownership and feeding marshmallows to zoo giraffes in the 1970s; a Case Western Reserve University civil engineering education; a hot tub, a misstep, and multiple revisions.

“I’m sorry that wasn’t very straightforward,” Averbeck says brightly, “but neither was writing it.”

In Two Problems for Sophia, Sophia proves as skilled at calculations as she is at oration when Noodle’s presence creates dual dilemmas for her vibrant, multigenerational, interracial family.

“The first was his tongue,” Averbeck writes. “When Noodle kissed you, his eyelashes danced a little fluzzle, then his nose swooped in for a nuzzle, and then....”

The inevitable slurp is especially odious to (charmingly) irate Grand-mamá. Even worse, to the consternation of the whole family, Noodle snores. With his elongated neck and powerful lungs:“It’s like a tuba being played by a jet engine,” Sophia tells Ms. Canticle, an acoustical engineer whose expertise she seeks to troubleshoot possible solutions.

Manipulating Noodle’s neck won’t work; nor do earplugs or sound-dampening headphones. Her last hope is Sophia’s Snore Transformer, designed and built from disparate parts, sourced from family and friends, including a gavel, a girdle, and a spare fluegelhorn.

Such ingenuity—and fearlessness—are the qualities that immediately drew Ismail to Sophia.

“Sophia is very strong,” says Ismail, whose illustration process involves scanning watercolor-painted elements and collaging them to create full images in Photoshop. “She’s someone you can look up to, she’s smart and savvy, and not just jolly-jolly all the time. Someone who can go to ballet constantly and be excited about that but also learn big words, build machines, and be confident.”

Since One Word, Sophia’s style has evolved. Instead of the ballet bun, she now sports two Afro-puff ponytails. In lieu of her blue tutu, she wears a green-and-black suspender skirt over a white T-shirt.

“There’s a freedom and a sort of looseness” to Ismail’s art, says Averbeck, who’s also an illustrator. “That is really hard to achieve, and she does it beautifully....I love her interpretation of the characters and that she didn’t keep them static.”

Two Problems’innovations pay off: “Fun, clever, and empowering, this is the rare case of a sequel that outshines its predecessor,” Kirkus writes in a starred review. And Averbeck and Ismail are currently at work on a third installment, in which Sophia will undoubtedly continue to grow, change, strive, and thrive.

“What’s so great about Jim’s writing,” Ismail says, “is that it’s not stuck in the past. When I receive a text like this, I need to step up to it. The fact is, when you’re a writer or an illustrator...the publisher is handing you a microphone, a platform [to reach] all these tiny, impressionable children. We should all respond in a responsible way, and I think that’s what these books do.”

Megan Labrise is a staff writer and the co-host of the Kirkus podcast, Fully Booked. Photo of Jim Averbeck is by Tim O’Meara; the photo of Yasmeen Ismail is by Olivia Hemingway.