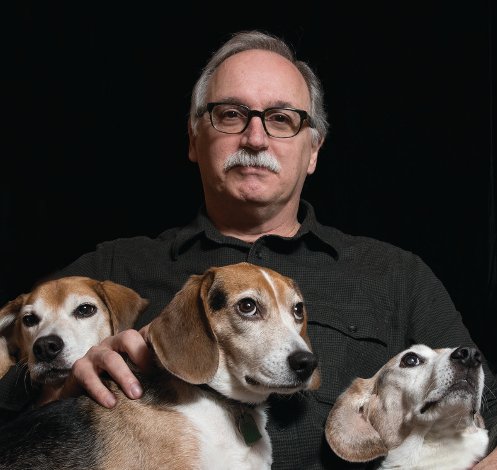 “I’m trying to put less food on my kids’ tables,” Jim Shepard jokes. This, in reference to the years he spent researching the Minoan eruption of Thera—a catastrophic volcanic event in mid-second millennium B.C.E.—with the intent to write something fairly substantial about it and ending up instead with “Cretan Love Song,” a story that, at just over two pages, is the shortest Shepard has ever published, and a standout in The World to Come, his most recent story collection. “What you’re really interested in is the actual shitstorm,” Shepard recalls thinking to himself, “so why don’t you just have people reacting to it as it’s happening?” It captures, by virtue of Shepard’s preternatural, almost supernatural, insight into fraught human predicament, the entirety of a man’s life at the very moment it’s about to be taken from him, which is to say: a man attempting, too late, to outrun that which he knows he cannot outrun.

Rarely does one come across a characterization of Jim Shepard and his work without mention of the extensive and zealous research process in which he immerses himself. His devoted probings of historic events equip him to write with erudition, into a wide range of circumstance, environment, and connection: two gay engineers on the Hindenburg (“Love and Hydrogen”); a group of avalanche researchers trying to survive the brutality of winter on a Swiss mountaintop (“Your Fate Hurtles Down at You”); and the intricate workings of a Warsaw ghetto during the Holocaust seen through the eyes of an eight-year-old, as in The Book of Aron, Shepard’s most recent novel and a finalist for the 2015 Kirkus Prize.

The attention paid to Shepard’s world-building is only natural—he’s a singular, unsurpassed travel guide who can project a reader, with his very first sentence, out of their life as they know it and plunge them deep into the conditions of quite another world. And Shepard’s extraordinary gift for vividly reimagining times past and rendering extremity is on full display in The World to Come: “HMS Terror”enlists us aboard an ill-fated seafaring exploration in the mid-nineteenth century, “Telemachus” takes us below the ocean’s surface in a T-class submarine during WWII, and “The Ocean of Air” invites us far above the world below as we follow the ambitious pursuit of a balloonist in eighteenth century France. But a fixation on the dazzling imaginative work Shepard executes on the surface of the story can too often belie the even more impressive—and, I would argue, more arduous—emotional infrastructure he’s created, the reservoirs of rigor and precision and care upon which Shepard draws to create characters of remarkable depth and complex psychology.

It isn’t the intrinsically captivating elements of catastrophe or the inherent charge of a historic event that activates Shepard. “What I’m really interested in,” Shepard says, “is the way in which a character in one of these situations is met by an impossible emotional dilemma, or a moment in which their dearest-held illusions about themselves are challenged or thrown into crisis.” In this way, it’s possible to see a story’s alluring exterior premise to be, in fact, the background against which Shepard’s analysis of the interior life of a character—or set of characters, as the case may be—is displayed. This refocusing of consideration allows for an even more elucidating experience, so that when we enter a story like “Safety Tips for Living Alone,” a story in which we’re introduced to four husbands stationed on a shoddily-built Air Force tower as well as their respective wives on land who rightfully worry as they monitor oncoming weather systems, we’re able to recognize not only the precariousnessof the tower’s foundation, but the precariousness of the foundation of these marriages, too. They’re beleaguered by not only the mandated guard-keeping of the tower—even in the face of a weather system no one expects the structure to bear—but the socioeconomic conditions that delivered these couples unto this moment in which they must reckon with what is and is not tenable. Undergirding the story is Shepard’s trademark empathy for his characters. “One of the things that’s key to me in terms of animating dynamics like that is granting the aspirational part of them the honor they deserve,” he says. “For the story to work, that tension between ‘I can’t believe it’s still standing’ and ‘but look, it’s still standing’—be it the tower or the relationships—it has to be about more than plot development.”

Something similar is at work in the title story, one which Shepard says is the result of “the deepest rabbit hole of research” he went into among these stories. It’s a story told in diaristic form by a frontier housewife who’s recently lost a child but whose grief is provisionally relocated as a friendship with Tallie, the wife of a local farmer, advances into amorous territory. The story takes a sharp turn at its middle when the narrator learns, through suspect and ominous reports, that Tallie’s husband has abandoned his home and taken off with his wife. “What do you do in a situation like that, when there’s this instability in what you are and aren’t capable of at any given moment?” Shepard says.

And this is what the stories in The World to Come both appraise and apprise: that our vulnerability will be tested as regularly as our fortitude; that all methods to reroute ourselves around whatever is inexorable will prove pointless; and that our perceived footing in the world is no match for the unknowable tectonics at work below us. Jim Shepard’s stories show us who we are when the ground shakes, and, miraculously, they do so in such a way as to always allow the maximum passage of light.

Vincent Scarpa is a recent graduate of the MFA program at the Michener Center for Writers. He lives in New Jersey and tweets at @vincentscarpa.