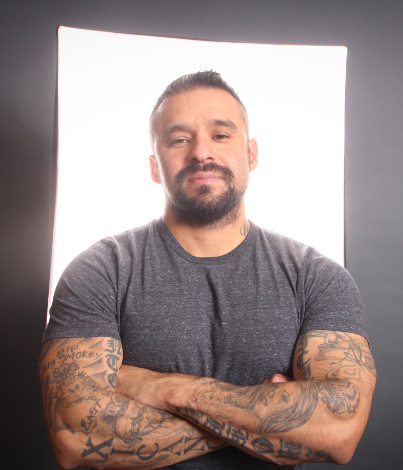 Aficionados and budding fans of poetry alike should ready themselves to embrace the exquisite lyricism in Joe Jiménez’s debut teen novel, Bloodline. Words are wound and wrapped and married in a delicate weave that belies the story’s underlying tragedy.

This isn’t a novel intended just to appease verse enthusiasts, though. Jiménez sees himself as a poet who experiments with prose. He wanted to retell Hamlet but in second person, even though Jiménez, who teaches 12th-grade English at a public school in San Antonio, Texas, always tells his students never to write in second person unless they have “a really good reason.” So what is Jiménez’s really good reason? “To write a…book directed toward Latino male students who don’t really like to read a lot,” he says. Jiménez wanted to encourage the feeling of familiarity the second person can induce. “I was especially motivated by the fact that I was afraid of Hamlet when I was in high school, and I see fear in my students’ faces whenever I mention the S word,” he adds. “So this was an experiment in how not to be afraid.”

The experiment was sparked by a Macondo workshop with writer Reyna Grande. The spirit of Macondo, started in 1998 by Sandra Cisneros, is to gather writers each summer in San Antonio to write about issues of social justice with the vision of improving communities. There wasn’t a poetry workshop at Macondo when Jiménez attended, but he was drawn to Grande’s fiction workshop. He wondered what he could write to practice skills that could be transferable to his preferred métier of poetry. “The experiment was how to write more lyrically in prose sentences rather than lines,” says Jiménez. “I see fiction as a place to play and experiment and explore.”

His exploration led to the creation of Bloodline’s conflicted protagonist, Abraham, a 17-year-old high school student in San Antonio being raised by his grandmother. Abraham has both a good heart and a penchant for fighting. He fears becoming the kind of man he knows best: a slithery wretch like his uncle or his mysteriously disappearing father. His beloved grandmother and doting girlfriend offer unconditional love, but he’s so ensnared in the trappings of his own lineage he struggles to see anything clearly other than a genetic predisposition for tragedy.

“I think the central question for me growing up without a father was how do I know I’m good? How do I know I’m doing the right thing? And of course when you’re gay there’s a whole other thing that you throw on top of that like maybe everybody’s right and I’m wrong,” Jiménez says. “So trying to figure all of that out, compounded by the things that I felt I should have known but didn’t, I did experience a feeling of inadequacy.”

Despite fear, apprehension, and similar feelings of inadequacy, Abraham has tender, hopeful moments as he ponders the simple pleasures of life, like owning a dog or the brilliant red of his girlfriend’s hair. Abraham might struggle to attain those glimpses of happiness, but Jiménez has managed to align his own outlook. “When I was a 17-year-old I wanted a job, a truck, a house, and some dogs,” he says. “Of course those ideas evolved into just wanting peace and calm and happiness.”

“Teaching seniors is awesome and teaching working-class kids is awesome. When you get to see hope in someone where there was once despair…it makes me glad that this is the place where I am,” says Jiménez. “But what I do hope that I really see in my students who are about to graduate is that the ideas I’ve promoted with them all year long—like gratitude and grace—have taken root.”