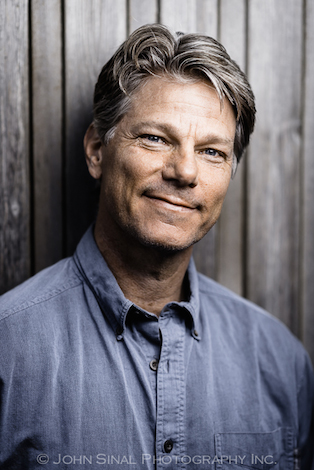 In his novel The Jaguar’s Children, John Valliant explores a horrific and unfortunately far too realistic world of immigration from Mexico into the U.S. The novel’s narrator Hector has been abandoned by Mexican coyotes in the sealed tank of a water truck filled with people trying to cross the border. Through Hector’s voice, Valliant creates not only the world of fear, hunger, and thirst inside the tank, but also a view of Mexico and the U.S. in the wake of NAFTA, a panorama that made me think of paintings by Hieronymus Bosch.

Trapped in the tank, Hector, a modest and likeable young man from Oaxaca, is trying to call for help on a cell phone as he runs out of water and the charge on the phone fades. Waiting and hoping for another bar to appear on the phone’s screen, he records a series of sound files that make up the story. Valliant has put Hector in an impossible situation and given himself a daunting challenge as a writer. How can Hector get out of the tank? How does Valliant move the story forward?

This is a dark and grisly book but it is also a meditation on hope and how almost anything is possible as long as there is hope. I talked to Vaillant recently about the novel.

Reading your novel, it becomes clear you have deep roots in Mexico.

Three generations of my family lived down there, most I never met. My great grandfather was a banker in Mexico City. A farm kid from Indiana, he made a nice life for himself there. My grandmother, his daughter, was very close to the Morrows. (Dwight Morrow was the U.S. ambassador to Mexico from 1927-1930; his daughter Anne married Charles Lindberg.) My grandmother met my grandfather, an archeologist doing research in Mexico on the Aztecs.  I grew up in houses in New England that were filled with art and antiques from Mexico: a Diego Rivera, giant pieces of colonial furniture. I had never seen the old Mexico that my grandparents knew until 2009 when my wife moved us to Oaxaca for a year where I had a strange sense of recognition. The aesthetic that was all around me in Oaxaca was what I’d been seeing since infancy. We all took to the place, and it helped having children. If you have kids, people look at you differently. You’re connected to something larger than yourself.

This is your first novel?

The two non-fiction books I wrote were the hardest things I could do at the time, but the novel is the supreme challenge, the Everest I had to try. Learning how to construct a narrative was frightening and unnerving but incredibly exciting. How do you keep the reader believing, connected? This novel wasn’t a conscious choice. I was doing edits in Oaxaca on The Tiger when a voice came into my head and uttered the first lines of the book. It was an apologetic guy who was in trouble, the kind of guy who’s sorry to bother you. When the muse gives you an invitation of this kind, you have to accept it.

One of the characters in your book is an American archeologist.

My grandfather’s book The Aztecs of Mexico came out in 1941. He took his life in 1945. There’s been so much bloodshed in Mexico, he was sort of a springboard. I thought of writing about him directly but that was too cannibalistic. This was a way of dealing with the long-term resonance of suicide that infiltrates a family. How do you take the experience you’ve had—difficult, painful stuff and metabolize it into something helpful?

You used an innovative narrative device: sound files on a cell phone.

That’s how Hector first came to me, as a voice in my head. Originally I wrote the book as text messages, but I couldn’t see Hector in the back of that truck, typing with his thumbs. I wanted it to be like messages in a bottle, but to have the looseness of the spoken word, and the poetry. Altogether, the sound files are nine hours of talking time over four days. I went back and forth with people who know cell phone technology to find out what was theoretically possible. I don’t have a cell phone myself. It took a long time to come to that format.

You refer to Hector and the other immigrants in terms of the re-conquest of the southwestern United States.

The cultural and ethnic boundary between Mexico and the U.S. is a hell of lot farther north than most people here want to admit. Our view of Mexico is so distorted and Anglo-centric; we’re so used to looking down and all that implies. But for Mexicans, the southwestern states are lost territory. They think, ‘Our ancestors were there, we have the right to be there.’ The way Mexicans assert that right is so humble and dangerous. They subject themselves to the sort of ordeal that a Delta Force recon guy would do, but all the Mexican immigrant wants is to go work on a chicken farm—an honest job for an honest day’s pay.

John Davidson is most recently the author of the novel The Obedient Assassin.