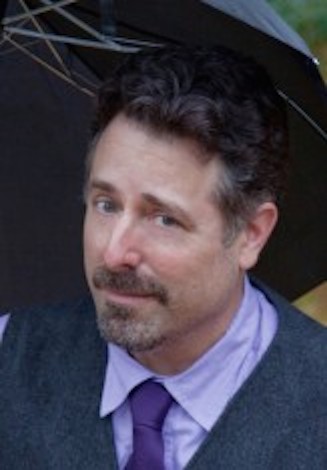 Nearly 20 years ago, Joseph Skibell made his literary debut with A Blessing on the Moon, a dark and magical novel set during the Holocaust. Many of the characters are based on real people, Jewish family members whom Skibell never met. He wrote them into a kind of existence somehow no less real despite being fiction. Now, in his first essay collection, My Father’s Guitar and Other Imaginary Things, Skibell explores the magic realism in real life rather than taking real life and spinning it into magic realism. Though here he writes from memory and the experiences and characters are real, they are also inherently mythical. There is a ghost in one of the essays and vibrant hallucinations in another; however, as Skibell explains, there is an imaginary element to all true stories, not just his. It’s one of the reasons for the shift in genre, at least temporarily. We talked recently about his new book.

Why the switch to non-fiction?

There are at least two reasons. A novel is like having a baby or going to war; you kind of become monomaniacal about it. Just as somebody who goes to war, I imagine, doesn't want to reenlist again as soon as the war is over, or a woman who has just had a baby isn’t going to say let me have another one, when you finish a novel you definitely don’t want to start a new novel. At least that's my experience. In between my first three novels, in those two spaces, the idea of writing something else, something smaller that used a completely different set of muscles, was really enjoyable. But also, in these stories there are so many things that are implausible or coincidental to the point of unbelievability that if I tried to peddle them as fiction, they wouldn’t work.

Growing up Jewish in Lubbock, Texas could fall in the stranger-than-fiction category. What was that like?

Now I have a certain nostalgia towards it, I actually do, but at the time it was exquisitely uncomfortable. I’ve heard people that grew up in the Soviet empire talking about how nostalgic they are for Stalin, so you know I guess you can be nostalgic about anything...

You definitely don’t sound Texan. Did the drawl affect how you think about language?

I guess growing up in Lubbock, with those really extravagant accents, that voice is kind of like a cactus. It's beautiful, but it's also a little barbed. So when I think about language, I think about how it reveals and conceals things simultaneously. We write hoping to be understood but we’re probably not, at least not completely. I think it was Nietzsche who said, my greatest hope is to be misunderstood correctly because there's no hope for being really understood.

In this collection, you write about your problematic relationship with your father and the first time you had sex, among other subjects many people prefer to keep to themselves. Do you feel a little exposed?

For better or worse, I've never really felt like I needed to hide much. I’m kind of an open person, maybe stupidly in some cases. But even though I'm the narrator of all these stories, in some ways I’m not the main character. The “I” in this book is so much more interested in the world around him than the “I” in my novels. When you're writing a novel and you’re writing in the first person, you really have to make “I” the narrator a character and I think here for various reasons it was easy to establish a minor character out of a narrator and make all the other people in the stories the major characters.

Reality is a 360-degree experience, and we're all excluded from that total experience by our subjectivity.  The illusion of writing is that you put something down on paper and that becomes the truth, but it's really just one version of one tiny shred of the truth. I was worried that, by describing things about other people, I was in a way kind of damning them eternally to this version of their life that they may not think is true to their own subjective experience. So I sent people the parts about them and gave them a pseudonymous opt-out so that anybody could have a pseudonym if they wanted to.

One of the running themes in the collection seems to be that memory is an inherently creative endeavor, almost synonymous with imagination. Is that fair to say?

I’m currently writing an essay called “In Defense of the Imaginary” because people are really suspect of the imaginary in our culture. Whereas physical things exist in four dimensions—three dimensions of space and one dimension of time—imaginary things only exist in the dimension of time, so people say, Oh, it’s only imaginary. We write off something that’s not there, put it down even though the imaginary is really where all the important things reside. I mean, love has no physical presence. Music has no physical presence. Stories have no physical presence.  Our relationships are imaginary, our notions of ourselves are imaginary: who we are, our memories. In my essay I go on to say that there is nothing really more imaginary than a day. A day doesn’t even exist. You know the earth hangs in space and it spins and spins and spins around the sun and because of that alternate pattern of darkness and light, we experience something we call a day and all the imaginariness of that day. It kind of freaks me out that a planet moving through space creates time.