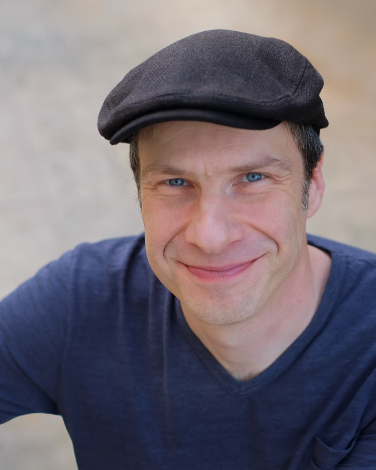 A childhood fear of the dark was the spark for J.R. Krause’s poignant picture book Dragon Night.

“I had to sleep with the lights on,” says Krause, a Los Angeles–based author/illustrator whose day job is TV animator (The Simpsons, Futurama, King of the Hill,etc.). “Then I had my own children, and it was the same thing. I have two girls, and they both went through it, being afraid of the night.”

Dragon Night’s protagonist is Georgie, a boy who loves reading, sports, and dragons as much as he dislikes the dark. One night, while he’s lying in bed, his favorite book, St. George & the Dragon, falls to the floor, releasing its mythical titular character into the room. Krause writes:

Georgie has never seen a real dragon before.

“Shhh! I’m running away,” whispers the dragon. “I’m afraid of the knight.”

Acknowledging their respective fears forges a fast friendship. Georgie climbs aboard the dragon for a magical nighttime adventure, flying high over a carnival, a bustling downtown, a baseball stadium—anything that’s brightly lit. When they reach the city limits, the dragon helps Georgie see the dark in a whole new light:

They sail silently down to a grassy field.

“You know,” says the dragon, “the night is dark, but it’s not always scary.”

Georgie isn’t so sure.

“Look,” says the dragon. “Without the darkness of night, we wouldn’t see the stars.”

“Listen,” says the dragon. “The night is quiet and peaceful.”

Before long, he curls up against the warm dragon and drifts off to sleep.

Dragon Night delights in characters who use their creativity and compassion to help one another. “Well-crafted bedtime reading featuring an unusually captivating monster,” Kirkus writes, recommending the book.

“The story came out of that childhood fear,” Krause says, “but it’s also about wanting to be friends, as a child, with someone or something in a way that’s magical or powerful or can protect you.”

Krause’s distinctive illustrations, inspired by linocut, are dominated by blue, purple, orange, yellow, and black. They are inked by hand, scanned, and stamped in Photoshop. It’s a divergent style from his previous children’s books (the Poco Locoseries, written with wife Maria Chua) as well as his work in animation.

“Both animation and picture books are visual storytelling, and both involve sequential art,” he says. “I work on The Simpsons primarily, and getting everything to make sense to the audience who’s watching it—instantly—is [tricky]. You can’t have any gray area. What something is needs to be clear, and in picture books, too, clarity [is key].”

The clear aims of Dragon Night include fostering kindness, empathy, and creative problem-solving. Krause also hopes to foster a love of reading and being read to.

“I still love reading to my kids,” he says, “even though one’s a teenager now….Just sharing that from an early age, and trying to get kids to be readers, is so important.

“Reading promotes using your own imagination,” Krause says, “so eventually, when you move on to books without pictures, you’re creating images of the characters virtually in your own head. I’m deeply supportive of anything that nurtures that.”

Megan Labrise is the editor at large and hosts the Fully Booked podcast. Dragon Night was reviewed in the Nov. 15, 2018, issue.