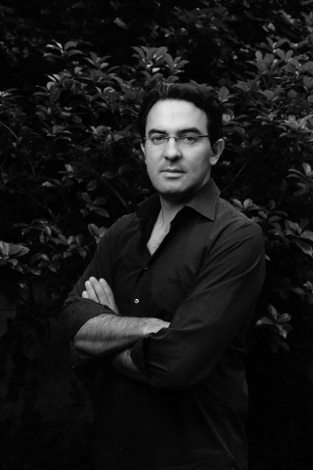 Juan Gabriel Vásquez’s latest novel, Reputations, plays with the notion of the making and breaking of reputation, compressed into the span of a continuous three-day period. Vásquez uses a classical dramatic arc to portray the apotheosis and tragic fall of the protagonist, Mallarino, a legendary caricaturist, whose cartoons deflate the careers—and, possibly, lives—of the subjects of Mallarino’s distaste and even invective.

This short novel opens with Mallarino on the way to the venue where he will receive Colombia’s greatest cultural award for his work. The next afternoon, he will receive a visit from a woman, Samanta Leal, who had visited his house many years earlier as a friend of his daughter that causes him to question everything he has achieved and made of his life. “This moment becomes the great encounter of Mallarino’s life,” Vásquez says. “Samanta makes him re-evaluate everything he believes.” Vásquez suggests that Mallarino has seen himself “as a man of the people, giving voice to those without a voice, but he doesn’t have a strong connection with the people.” In fact, Mallarino literally separates himself from people: he lives in an isolated mountain home above Bogotá; he faxes in his drawings to his newspaper; he is divorced from his wife and is estranged from his daughter. Mallarino is “a man full of contradictions, divided inside.” The encounter with Samanta, Vásquez continues, represents Mallarino’s “challenge to empathize, a last chance to connect with a human being.”

The structure of the novel suggests that a life and our view of a life may change in the span of a day or two. It takes only a reminder of a moment in our past, or the appearance of a cartoon, to change the trajectory of our life and to cause a reassessment of our identity and reputation. Opening with a suggestion of the ghost of one of Mallarino’s heroes, the cartoonist, Ricardo Rendón, walking the streets of Bogotá, and ending with the ghostly suggestion of some future self stripped of everything, the novel seems to circle back on itself. “It’s the idea of tragedy: the sun come full circle,” Vásquez says. “Everything has stayed the same on the outside but everything has changed on the inside. Mallarino’s world is turned upside down.”

As a result of this tempering, Vásquez’s novel avoids melodrama. The tone of Reputations is subdued, musing, and reflective, befitting a novel in which so much of the action takes place in Mallarino’s head. Reputation, memory, and time intertwine in the novel but ambiguity is at its heart. Notions of certainty and judgment are challenged: what can we know about another human being? Human nature, despite progressive theories to the contrary, has remained unchanged for thousands and thousands of years, yet the individual in our midst—partner, colleague, friend—remains, at his or her core, a mystery. “Ultimately, no one in the world can know someone else,” Vásquez says. “I write and I read to explore that mystery of human beings and human relationships. I write novels out of questions I have; I write because I don’t know things until I write about them.”

Vásquez extends this point about the mystery at the heart of human beings to history and memory: “The past is impossible to know. As Faulkner writes, ‘The past is never dead. It’s not even past.’ We know we are in the process of becoming adults when we realize the past is not a fixed thing, not set in stone,” Vásquez says. “The image we have of our father as a child might change when, as an adult, we hear a story about him and we understand he is not the man we thought we knew.” Memories, even one’s own, are fragile. So must Mallarino confront his own lack of self-understanding.

Vásquez has worked as a translator (writers such as Victor Hugo and E. M. Forster) in addition to his fiction and political writing (for various publications).

“Translation is the best school possible for a novelist,” Vásquez claims. “We learn to write by reading, and there is no better reader than a translator: attempting to render the mechanics of a sentence while also transposing an entire culture.” His influences include writers such as Juan Carlos Onetti and the short novels of Henry James—especially on Reputations, especially in terms of the novel’s ambiguous conclusion. “This novel, as with the fiction of Henry James, does not offer easy or crystalline answers or conclusions,” Vásquez says. The historical figure of Rendón is a specter haunting Mallarino’s mind in a manner not dissimilar to the specters in James’ Turn of the Screw.

The open-ended conclusion of Reputations, as with life, does not solve the questions this engaging novel raises—about art, about moral certitude, about recognition as well as reputation—but keeps key questions vibrantly alive long after the reader closes the book.