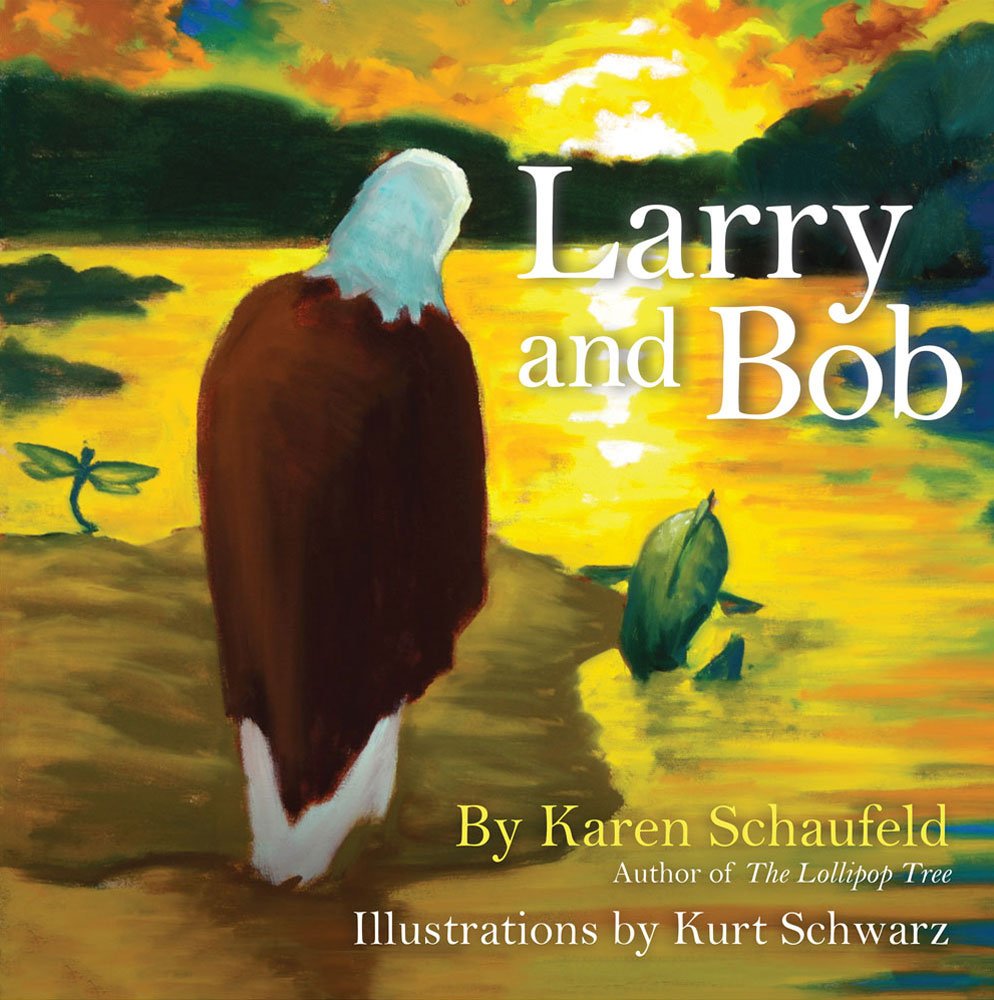 When Karen Schaufeld writes her children’s books, she doesn’t shy away from using a big vocabulary. Her award-winning Larry and Bob is told in a “calm, melodic style,” according to Kirkus Reviews, and the reason for that is she intends for families to read them together. “There’s a huge emotional impact to having a parent or grandparent read a book to you,” Schaufeld says.

Larry and Bob centers on parenting and an unlikely friendship between two parents, a bald eagle and a smallmouth bass. Featuring gorgeous fine-art illustrations of the natural world, the book follows both the friendship and the life cycle of the animals from their first encounter as natural enemies to, later, devoted friends. Larry, the eagle, catches Bob, the bass, intending to eat him for lunch, but Larry’s convinced to let Bob go by the fish’s heartfelt plea:

Bob took his chance. “I can tell you are a caring eagle, doing your best to provide for your little one,” gesturing with his fin to the egg beside him. “I have a lot of little ones to care for too. Perhaps, dad to dad, you could just let me get back to my job?”

Because Larry lets Bob go, the fish is ultimately responsible for saving the life of the eagle’s chick. The pair bond over their “dad” similarities despite their species’ differences, providing a refreshing take on the friendship between two nurturing males, a theme that tends to be underrepresented in picture books. “They’re just trying to do their best as dads, which is like most of the dads I know,” Schaufeld says. “They’re not particularly different or special; they’re just two guys. It was important that they were so different but that they found commonality. That’s a larger message for me, that people can be very different but [have] so many human elements that are the same.” And, she notes, there’s real evidence of that in the natural world: Male smallmouth bass do protect their eggs, and eagles share the duty of raising their fledglings.

Schaufeld, who’s also the CEO of investment firm SWaN Hill Top and the founder and president of philanthropic nonprofit 100WomenStrong, lives on a farm in Loudoun County, Virginia, so turning to the natural environment for stories comes naturally. The picture book The Lollipop Tree is based on a true story of resiliency; How to Eat a Peach features squirrels and peach trees like the ones on her farm. And her forthcoming title, Vultures: A Love Story, focuses on “two young vultures whose eyes meet across a carcass.” Using nature as the setting for her books also allows her to create tales that are like fables, which readers can access at any age.

“If you are very young, you’re going to just enjoy the sound of your parent’s voice,” she explains, recalling how she read to her own children when they were young. “When you get a little bit older, you’re going to look for the insect on every page.” Later, she says, “you’re going to like the story, and you’re going to learn about sequence...[and] you’re going to understand there’s a deeper meaning in all of that. And when you’re an adult, hopefully, the meaning and the language and the pictures will be beautiful enough that you won’t have to say, ‘Gosh, I hope my child won’t ask me to read that book again.’ ”

Schaufeld brought artist Kurt Schwarz on board to create the illustrations for her stories. Because she publishes the books herself, she has a unique relationship with him during the writing process: She delivers an early draft of the manuscript to Schwarz, who shows her sketches to make sure he’s on the right track before committing to oil paintings. (Schaufeld may have a few illustrations that she envisions from a particular angle, but otherwise, she leaves the images’ perspectives up to Schwarz.) Once she’s seen his work, “I go back to my manuscript…and I start stripping words away. I don’t need to say things that are already being shown.” The final results are all-ages titles to be read aloud and shared across generations.

The guiding principle of reading together appears not only in Schaufeld’s titles, but also in her philanthropic work. Schaufeld and her sister co-founded All Ages Read Together, an early-education program that serves students who don’t have any other access to preschool. At All Ages, the author says, the children focus on a theme of the week, with each theme introduced through a picture book that the children get to keep “to start their home libraries.” The program uses older volunteers—“an underutilized resource in our community”—to create a bond between children at the very early stages of learning to read and adults who can nurture their ability.

Schaufeld also eschews traditional ideas about age categories for books. Limiting books for the youngest readers to short, simple words doesn’t reflect early language acquisition: “[Suppose] I have an infant, but I’m only going to use the simplest words to speak to my infant. You wouldn’t do that.” Instead, “The way you get new good vocabulary…is from hearing words that you don’t know the meaning of yet. You learn [them] in context. You ask the question, ‘What does that mean?’ ”

Schaufeld isn’t concerned about whether a young reader can identify every single word; with her picture books, she’s focused on creating a meaningful experience. “The time that I spent reading to my kids was not only meaningful to me, but…to my kids,” she believes. “It has nothing to do with age or educational achievement. It’s about closeness.” To that end, Schaufeld continues to create books that embrace that feeling of closeness and community, whether they’re about trees overcoming hardships, a cranky farmer bonding with squirrels over a love of peaches, vultures falling in love, or two regular dads finding kinship despite their many differences.