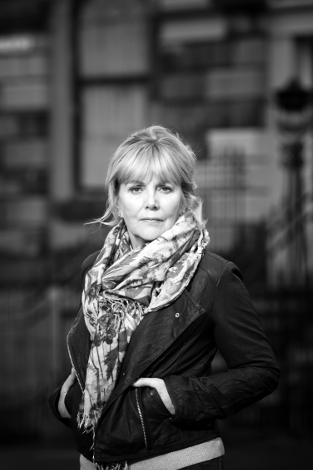 Transcription, Kate Atkinson’s latest novel, has so much intrigue—reveals and reversals and counter-reversals—that one might imagine she had the whole thing plotted out from the start. She did not.

“You have to trust the whole writing process, because it’s all just like jumping off a cliff, really,” she tells me by phone from her home in Edinburgh. And so you have to trust: Yes, there is a parachute. It has opened before. It will open this time. For Atkinson—who has won, among other accolades, the Costa Book Awards novel of the year three different times—the parachute has a good track record. It is nerve-wracking, still, but then, that’s the fun part. “If you knew everything that’s going to happen, and if you knew how it was going to happen, I would be quite bored, really. I think it’s in that organic unfurling that the enjoyment is. And the panic, and the challenge, but it’s what makes it interesting.”

In this case, the organic unfurling is the story of 18-year-old Juliet Armstrong, who, in 1940, gets recruited for the still-nascent M15 security service and is assigned to transcribe the meetings between undercover British intelligence and British Nazi sympathizers. A decade later, she’s left the service behind her for a job producing children’s radio dramas for the BBC, but while she left the service after the war, she’s forever entangled with her covert past.

“If I had to describe the process,” Atkinson writes in an author’s note (which does exactly that), “I would say that it felt like a wrenching apart of history followed by an imaginative reconstruction.” She’d been researching A God in Ruins (2015) in Britain’s National Archives right around the time British security forces released the much-anticipated papers revealing the identity of “Jack King,” an MI5 agent who’d successfully infiltrated British Fascist circles.

It was a huge story—the real “Jack King” wasn’t who anyone had suspected—but what transfixed Atkinson were the transcripts of his meetings. “I became intrigued about who had typed them,” she says. The best part is: Know one knows. “You’re free to give her any kind of story you want and leave your imagination to do the work, as opposed to using facts to do the work.”But in writing Transcription, Atkinson wanted some distance from reality. “If it’s something that actually happened to somebody,” she says, “then I don’t want to deal with that.” She is still thinking through the nature and responsibilities of historical fiction. “You’re not just creating things from your brain. You’re using things that actually happened. And I think interweaving those two things is quite tricky,” Atkinson says.

Anyway, it wasn’t the precise facts of the war that intrigued her; when she started writing, she wasn’t even thinking of it as a particularly war-time book. It’s set in a period where “bombs aren’t dropping, war hasn’t bit, and it’s suspicion that’s the main atmosphere.

“I wanted to write about ambivalence and ambiguity, about being in a fog of not-knowing,” explains Atkinson. “Because I think for me, this book was very

You could say that Transcription is a WWII espionage thriller, just like A God In Ruins is historical fiction, or that Case Histories—the first of her Jackson Brodie novels—is a detective novel. It wouldn’t be untrue; it would just be limited. “Genre is something that’s handy for librarians and booksellers, but it’s not so handy for writers,” she says. “If I started thinking, ‘This book is a so-and-so book,’ I’d have already built fences to keep me inside of that. Whereas if I don’t think like that, then I’m free to break down those barriers.

“Cab drivers are always saying to me, ‘Oh, you’re a writer, what kind of books do you write?’ ” Atkinson says. “And I always say, ‘Well, I don’t know, I write very good books actually.’ ”