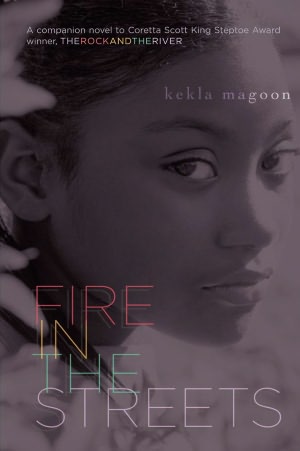 In Fire in the Streets, Maxie wants more than anything in the world to be a Black Panther. Stuffing envelopes and making phone calls at the local Black Panther office isn't her idea of fighting for civil rights. But when the movement starts affecting the people she loves the most, she discovers that being a Black Panther isn't the end of her hard work—it's the beginning of even harder work.

Author Kekla Magoon discusses how, in any fight for social change, every small role matters, even if history never knows their names.

You frame Maxie's very personal story within a larger historical context—why did you structure the book this way?

In terms of fiction, it's best when you can have a personal story and be really connected to the character on an emotional level, in addition to embedding them in a larger historical moment. I've read a lot of nonfiction about the Panthers and a lot of stories that gloss over what it might be like to be on the front lines, to be putting yourself at risk on a day-to-day basis. I really like to know what motivated young people to get involved beyond what's listed in history books. It's meaningful to take Maxie's personal experience, her personal life, the issues that were going on in her family and in her home, and put those into the larger political drama going on.

Maxie is a young girl effecting real change on a practical level—do you think your young readers are as engaged as she is?

I think there are a lot more young people engaged in social change than we think of as being engaged! But also, I think there are a lot of teens who don't realize they as teenagers can have an impact on the world. Another reason to write about a young person was to remind teens that your little part can help; if you have something to give, that's an important thing to do even if it seems small. When you look at the civil rights movement, at the people who rise to the top like Dr. King and Rosa Parks, there were so many hundreds of thousands, maybe even millions, of individuals whose names we don't know who also gave a lot, who created the change the actually happened. There's a huge network of people we don't necessarily know about.

Loyalty is an important theme in your book. Why?

Because it's a thing everybody has to face in small ways and bigger ways. Who your friends are going to be, what kind of person you're going to be, are you going to be like your family, or like your friends, are you going to respond to peer pressure, are you going to pressure other people—there are all these small decisions we make on a daily basis, particularly as a teenager. Loyalty plays a big role in that process. It's always a choice, who you're going to align yourself with. Maxie's story is an extreme example of having to choose your loyalty, but it's indicative of the choices all people make on a smaller scale. Fiction does that, takes things people experience and draws it in sharper relief.

I'm reading your book when the most powerful person in American is a black man—have we come a long way from the 1960s?

I definitely think we've traveled a long way. I think we have further to go, but the only way to make that progress is to continue making changes. Yes, we have a black president, and that's a huge step in the right direction in terms of civil rights and making equality available to everybody. I think the message that you can achieve this is really important to young people, but also important is that you don't have to be President Obama or Dr. King, you can be a regular person and still make a difference.

Now we have the narrative that anyone can be president, but in the midst of that narrative is the need to be super special. We also need role models who aren't at that epitome, people who are successful at business, or education, or parenthood—all these different roles people can aspire to. Society has more work to do showing children all the roles we can achieve. It can get lost in all the stories about heroes and big-name people—this incredible contribution so many individuals have made.