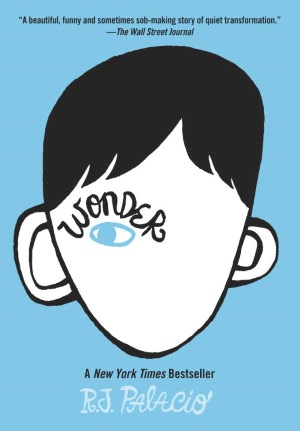 Wonder’s August Pullman is just your average 10-year-old boy, except that he’s never gone to school before, and his face doesn’t look like other kids’. When his parents decide that fifth grade might be a good starting point for his public education, Auggie is both excited and horrified. Nothing prepares him, though, for the relationships—both good and bad—he finds there, and the intensity he experiences just being a face in the crowd. Here, R.J. Palacio talks about the little girl at the ice-cream shop who started it all.

Find more of the Best Children's Fiction of 2012.

What was your inspiration for Wonder?

When my sons were 11 and three, we had an encounter with a little girl in front of an ice-cream store. I was out front with my younger son and my older son went inside for a chocolate milkshake, and I realized that sitting next to me was a little girl who looked very much like Auggie in the book. And I panicked because I knew the moment my three-year-old saw her, he was going to say or do something that would hurt her feelings. And that’s exactly what happened. He started to cry. I tried to get him away from the situation; I grabbed my older son, and his chocolate milkshake spilled all over the place and it was a big scene—exactly what I hoped wouldn’t happen, happened.

As we were leaving I heard the girl’s mother say in a very sweet voice, “Okay girls, time to go,” and my heart just broke for them. I was so disappointed in my reaction; I wished that instead of responding out of fear—not fear for myself, but that my son would hurt her feelings—I had responded from a point of kindness. I should have turned to her and started a conversation.

The rest of that day I kept obsessing about how I could have responded differently. That night the song ‘Wonder’ by Natalie Merchant came on the radio, and something about the joyful optimism in that song and the incident that happened earlier just jelled, and I started writing the book that night.

Why did you use several different points of view in your book?

Because I really wanted to tell Auggie’s complete story. He’s a lovable character and I adore him, but he’s limited in what he knows. He’s very adapted to how people react to him, but I don’t think he sees the big picture—he’s too young and too humble and too sheltered. For me to tell his complete story, I realized I had to leave his head. And so I had two rules: one, [these other characters] had to propel the narrative, and two, they had to tell Auggie’s story, they couldn’t hijack it. For me to be able to tell it in its complexity, I felt I had to go beyond him.

Auggie never describes his face but his sister does—what does that show about them?

It’s all about self-preservation. Auggie has learned to deal with his face, and he tries not to dwell on it, he tries not to see it. He looks in the mirror and worries about his hair. He worries what his hearing aids are going to make him look like.

It’s the exact opposite case with his sister. She’s had to deal with it every day and she’s very analytical, she tells things the way they are—she’s very bold. Her way is to deal with things head on. Almost like a scientist.

Julian’s parents were not kind—why include them?

Julian’s mother gets a really bad rap, and I guess it’s deserved, but to me she’s a very human character. I think she is one of those parents who’s blindly in love with their children to the point they want their kid to have everything perfect, they want the school picture to be perfect, they want the year to be perfect and their child to be popular and well liked. I do think she’s misguided and ultimately selfish. She puts her kids above being kind which is something we should never do.

In addition to Auggie’s extreme problems, you cover a lot of “normal” problems—parents splitting up, changing social circles, etc. Why?

I hoped readers would see themselves in the characters and realize—without being too hammered over head with it—that we all have problems. Auggie’s are the most obvious, but every single person has baggage. Things are surmountable. Seeing Auggie’s issues puts things into perspective, and I think perspective is really important for kids that age. They tend to think whatever they have is the worst out there.

The obvious theme of the book is this boy dealing with facial defects, but the underlying theme is kindness. If you learn to have your automatic response to every situation come from a point of kindness, you can never go wrong.
MORE FEATURES
POPULAR KIRKUS STARS