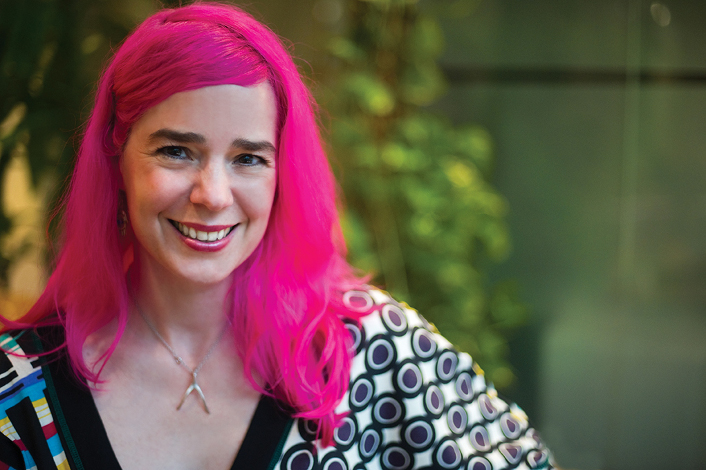 Muse of Nightmares, the highly anticipated follow up to Laini Taylor’s 2017 bestselling novel Strange the Dreamer, is a lush, romantic young adult fantasy with deep ties in the real world. Returning to the world of Weep, Muse of Nightmares finds Lazlo in a terrifying predicament. With Sarai’s ghost being held hostage by the vengeful Minya, he is forced into an impossible choice: save Weep and let Sarai’s ghost go, or sacrifice everyone else to keep his happy ending.

In Taylor’s intricate fantasy world, readers will find gods with blue skin, people with two hearts, ghosts, lost libraries, and all manner of mystical powers. Taylor has enjoyed constructing fictional worlds and maps ever since she was a kid, even if she never applied an actual plot to them. In constructing the universe for this duology, Taylor started with the idea of Sarai, a girl who lives high above the city and sends nightmares to the people down below. Then that idea linked up to an idea about the children of gods, inspired by the many groups of real people who inhabit the different spheres of their two parents and are made to feel unwelcome in both. “I think a little bit of worldbuilding goes a long way,” says Taylor. “I just wanted to have a few cues early on to let people know they were in a secondary world.”

At the heart of that secondary world are the characters beloved by Taylor’s many fans. While Lazlo and Sarai undoubtable top that list for most, Taylor has created an unforgettable monster in the diminutive Minya. Trapped forever in the body of a six year old, Minya’s gift (if you can call it that) is her ability to capture the souls of the dead and keep them trapped as her ghost servants, under her total control, if she so chooses. And, if she so chooses, she can let them go, to be lost forever. This is what she threatens to do to Sarai if Lazlo doesn’t do as she says.

Minya is truly vicious, obsessed with her vengeance, but Taylor hopes readers can find the humanity in her. “How can you not feel so much empathy for her? She really symbolizes the idea of trauma and how it can freeze a person...how it perpetuates the cycles of violence, and for me the question was...is it possible to break that? Is it possible to heal somebody like this?” And how does a writer make that process feel authentic? Violence “is the root of so much of what’s wrong in the world,” Taylor adds, “so I certainly didn’t want to be glib about it....It is pretty heartbreaking, a character like that, and I hoped it would come across that as awful as she is...how else could she possibly be?”

Beyond having a relatable villain, Taylor didn’t necessarily want a villain at all, at least not in the traditional sense. Citing a bit of “villain fatigue,” Taylor says

she was more interested in a situation where, instead of having one unambiguously evil force, no one is truly evil: They’re trapped in an endless cycle of trauma and pain. Her goal was to create a scenario where readers could feasibly hope for a way out.

The genre of fantasy is uniquely suited to this kind of social imagining, a magical space to examine the tangle of issues we struggle to work out in reality. Taylor admits that Lazlo himself is something of “a love letter to fantasy readers,” in that his love of stories and books is so often what gives him the tools he needs to be the hero. “This is what fantasy does,” says Taylor, “it makes us able to look at all of these issues through a new lens, and get a better perspective on them.”