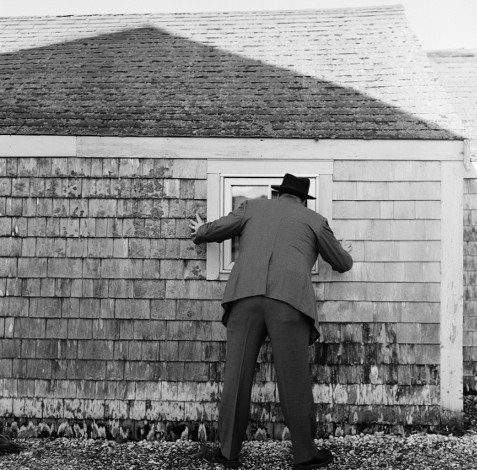 When the new Lemony Snicket series, All the Wrong Questions, was announced, it was as a series of four books. Knowing Lemony Snicket’s penchant for peculiarities, it’s only natural that the four books would in actuality be five. Volume 2.5, as it were, File Under: 13 Suspicious Incidents, presents 13 different cases solved deftly by the 13-year-old Lemony Snicket as he continues to apprentice in the decrepit, dried-up, sea-less town of Stain’d-by-the-Sea. When I speak with Handler over the phone, he’s observing a grey, rainy day in a neighborhood in San Francisco filled with Victorian homes. But then, where else would the purveyor of dismal backdrops be?

“It was in the original plan to keep exploring the town of Stain’d-by-the-Sea and its mysteries aside from the large case chronicles in All the Wrong Questions,” says Daniel Handler, the spokesperson (and writer) of the Lemony Snicket books. “The way in which the town and its mysteries would be explored was up in the air upon the first conception, but the idea was to poke under a few smaller rocks as well as some large rocks.”

The smaller rocks include a stolen newt, a thieving nanny and a mischievous demon. With each case, the young Snicket makes his inquiries and after careful deduction and requisite commentary about unruly hair, foul character and sticky floors, the crime in question is solved. The conclusions (Sub-file B) are found in the second part of the book, à la Donald J. Sobol.

“He’s a titan of children’s literature. I think his format with Encyclopedia Brown and Two-Minute Mysteries is a great way to introduce what a mystery is. I think when you’re a child, just about everything is a mystery,” Handler says. “Books are inherently mysterious. And so the idea that some would actually be mysteries is almost redundant.”

Surely Handler has unearthed some magic formula for writing a good mystery by now, an element or two or 13 that really give staying power to a series of clues entrapping characters run afoul?

“The fire poker,” says Handler. “If there’s no fire poker, it’s not a mystery! It’s hard enough figuring out what children’s literature is, and then to think about this being a Venn diagram between children’s literature and mystery, they’re two circles you can hardly draw, let alone figure out how they intersect,” he confesses. “I like to finish a book and have questions lingering on in my mind. And I think that all satisfying works of literature have a kind of absence of information somewhere in them. They create a world and then they erase a little bit of it. To me that’s an intriguing part of literature and I think an intriguing part of really good mysteries.”

An element not absent here are accompanying illustrations. Brett Helquist illustrated Snicket’s gothic series about those unfortunate orphans. This time it’s Seth, who nails the inky, angular, noir quality of All the Wrong Questions. Handler, an admirer of Seth’s work, waded through a sea of Stormtroopers at WonderCon in hopes of recruiting him. It worked and Handler uses one word repeatedly when discussing their collaborative process: splendid.

“I think Seth is worked into a terrible, whip-stung frenzy in the cold town in Canada in which he lives. That’ll teach him! I think we’ve both learned a lesson. I’ve learned how splendid it is to have such a talented person illustrate you and he’s learned to never pick up the phone.”

The book also has an audio version, narrated not by Handler but by a collection of notable personalities.

“We thought it would be fun to do a 13-voiced audio book and then we had to think of 13 people who might be willing to do it at more or less the last minute for a pittance who were located near the meager collection of microphones that we were able to dredge up at the last minute,” he explains. “So I e-mailed various people and tried to weave for them a story in which they owed me a favor—none of them did. To e-mail Jon Klassen and say: ‘Remember when you won the Caldecott but you had to go on tour for a different book and give a presentation in which you were entirely overshadowed? Well, you owe me!’ ”

Whether they owed him or not, Klassen and fellow illustrator Sophie Blackall, political commentator Rachel Maddow and NPR darlings Ira Glass and Terry Gross, to name a few, are on the roster of 13 voices.

Apart from the undeniable, overall appeal of Handler’s children’s literature and his deliverance of what he calls “a consistent rate of surprise,” one stylistic element readers expect is the introduction of elevated vocabulary and subsequent definitions.

Gordon West is a writer and illustrator living in Brooklyn. He is admittedly addicted to horror films and is at work on his own teen novel.