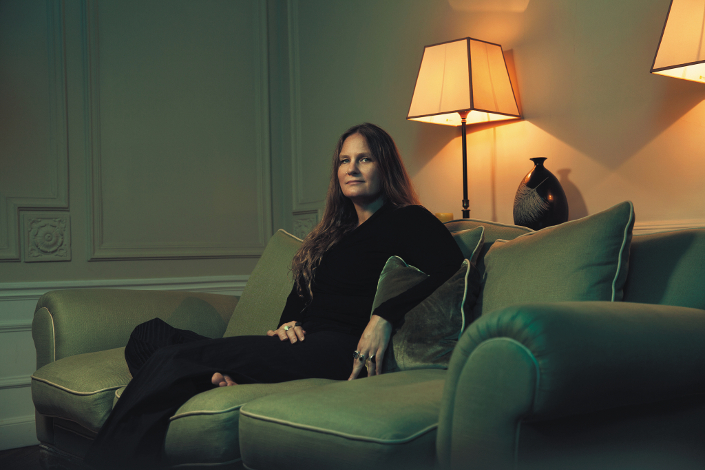 The girl comes alive in the white of the snow and on the white of the page in Lidia Yuknavitch’s incendiary new novel, The Small Backs of Children. It’s a story as fragmented as the fallout from the bomb that obliterated the girl’s family yet as interconnected as the lived experiences that bind the far-flung female artists populating Yuknavitch’s universe. In a war-torn Eastern European country, an American photographer captures the exact moment the girl becomes an orphan and the shot earns her instant fame. She shares the image with her close friend, a writer, who becomes obsessed with the girl, so much so that she falls into a deep depression of sorts, requiring hospitalization. Rallying around her, the writer’s friends—including the photographer; a bisexual poet; a young performance artist; and her older brother, a celebrated playwright—decide that they must find the girl and bring her to America. “Part of the question I’m trying to raise is, what is a girl?” says Yuknavitch. “Can she be something of her own making, or will we make her in our own image? I’m trying to hold that question and tension open long enough for the question to resonate.”

The photographer grapples with this same question, even before she takes the picture that catapults her to stardom and her friend deep into the recesses of her mind. “Photographs replace memory,” she says in a letter to the writer. “Photographs replace lived experience. History.” The nameless conflict that tore apart the girl’s family has “gone on and on for years without end, the supposed end of one war giving way to the endless micro-violences of forever.” For Yuknavitch, it’s about pausing in that moment before erasure, about giving words and voice to those whose stories were never told in the first place. “There are hundreds of thousands of children in the world who are caught inside violence and war,” she says, “children who endure our endless atrocities, and their names and stories are disappeared by every culture whose gaze is averted away from them. How do they enter representation?” As characters move through the novel, identity, representation, and art swirl together and, like the silver halides reducing to form the first shadows of the girl’s image on film, come together to form beings. So it is for Yuknavitch herself, where art and identity are “inseparable.” They “make a braid in my personal life,” she says, “and I guess you could say that I’ve devoted my entire adult life to amplifying the ways in which art and representation are spheres of change and possibility. Art can still matter, make change, wake us up, get us to briefly shift our gaze, and sometimes, our lives.”

Sometimes the art that awakens comes from the past and Yuknavitch acknowledges that, “dead women writers populate my words, or haunt them, in the best way. I consider it part of my writerly allegiance to those who came before me to push as far as I can in language.” Throughout Children, the specter of Virginia Woolf looms large, her blood running through the veins of the women at its heart. The writer, though she’s alone in her midnight blue writing room, is clear: “I am not Virginia Woolf.” It’s not a room of one’s own that she’s drawn to but “a different line of [Woolf’s], anyway: ‘Arrange whatever pieces come your way.’ Or this: ‘Someone has to die in order that the rest of us should value life more.’ ” Yuknavitch thinks of Woolf as “a kind of portal for some writers—some of us enter and never leave, we go through, and we can never use language the way that we did before we entered her texts.” Given the Matryoshka doll quality of stories nestled within one another in Children, it’s hardly surprising that Yuknavitch found herself drawn to Woolf’s The Waves and Between the Acts. “In The Waves, six characters’ voices accumulate into a gestalt of sorts,” she says. “In Between the Acts, there is a play within a play within a novel centered on the bleak history of war in England. I think both books were a call to arms. Both in terms of art and in terms of social organization. I think her walking into the water with stones in her pockets was another call to arms. For women writers…I think of Woolf as one of the greatest writers in human history, and so I’m living my private history in those terms, not the terms my culture dictates. In Woolf’s books language can still rearrange everything you thought you knew.”

Woolf’s work and her final walk into the River Ouse, calls to arms both, are heard and repeated, by Yuknavitch and the women in the world of Children. When the girl, after escaping the devastation of the attack on her home and finding solace with a lonely widow, begins reading art and history books, she wonders, “I see the stories of women, but they are always stuck inside the stories of men. Why is that?” In writing Children, Yuknavitch agrees that while her intent in part was to write a book for the girl, and for women who are within their own stories rather than those of men, it’s only “in fragments and not in any Master Narrative way. I’m not trying to allegorize all women and say ‘women and girls are like this.’ It would be more accurate to say that the women and girl in the novel are all part of one kind of woman, a woman who contains complexities and contradictions and struggles that are in excess of what the cultural dictates and norms are in America.” As the photographer grapples with the excess attention heaped on her in the wake of the photograph she took of the girl, Yuknavitch again invokes the never-dead Woolf in the room: “Do not forget that the door you are being ushered through has a false reality on the other side. Do not forget that the door is opening on someone else’s terms, someone else’s definition of open.” The women of Children buck and kick and break down the doors—and expectations—erected by the endless parade of “someone else.” They defy easy categorization, from their sexuality to their art, because Yuknavitch wants to “write about actual women, not romanticized or idealized women. And women are far more complex than our literature would lead us to believe.”

The body, particularly the female body, is at the epicenter of every story-within-a-story in Children: as the girl learns her story, she learns the story of women, the story of her body, both of which are steeped in violence. How and why violence is visited upon the female body—and how this literal violence can be linked to the violence of language—is “a book-length question requiring a book-length answer,” says Yuknavitch. Or maybe, she wonders, “a Proustian several-volumes answer?” The short answer is that “the body is an epistemological site. A site where meanings are generated, made and unmade and remade.” Yuknavitch says that she’s “like the love-child of Walt Whitman, Julie Kristeva, and Maurice Merleau-Ponty (because of course it was a threesome) in that way,” adding, “here’s a Ponty quote I like: ‘The body is our general medium for having a world.’ ” With the body as the site where meaning is written, erased, and rewritten, Yuknavitch writes in Children that, “All bodies are death bodies.” Violence, “like desire, is omnipresent in our bodies, our culture, our language and representation,” Yuknavitch says. “It’s with us from the moment of conception, because two living entities give their lives to make a third life when sperm and egg collide.” Her purpose in bringing violence—both the violence of war and the sexual violence perpetrated against women—to the forefront of the story was “an attempt to wrench it away from its culturally exploitative uses. In our lives and in our representations, violence against women and children has been turned into entertainment and lived through as though it is a part of who we are. The bodies of children and women have been so colossally objectified it’s as if we have no lives other than the stories that have been made of us.”

Throughout Children, Yuknavitch surrounds her bodies in language, writing them into being, no matter how painful that transformation may be. Near the end of the novel, when the girl has become the author and the driving force behind her own story, she says, “There are many kinds of love, but there is never a love, or a life, without pain.” And so Yuknavitch brings her bodies, her stories, to life in the place where love and pain meet. “It may be more true to say something like women and children know more about suffering than anyone on the planet,” she says. “Who is willing to tell that story, and when will we radically change our tropes and myths and platitudes to stop what we let happen?” Yuknavitch takes a radical, necessary step with The Small Backs of Children—she tells the stories that need to be told, not the ones that are easy to hear.

Jordan Foster is an editor for the crime fiction website The Life Sentence. She lives in Portland, Oregon.