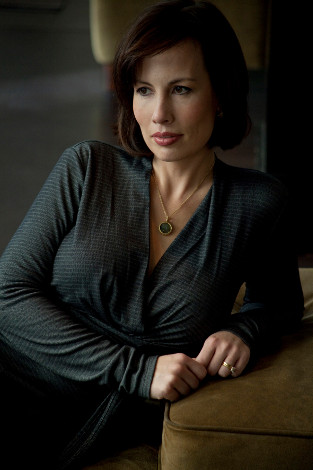 Former undercover CIA officer-turned-author J.C. Carleson admits she’s probably a publicist’s nightmare: No Twitter or Facebook account—and she doesn’t blog. “Old habits die hard,” she explains. “I’m used to being in the shadows; this is new for me. I still have a hard time saying ‘CIA’—my tongue catches on it!”

Now that her third book The Tyrant’s Daughter is receiving stellar reviews (Kirkus’ starred review calls it “smart, relevant, required reading”), Carleson may need to get comfortable in the limelight. And though she doesn’t intend to talk about her CIA background at book signings any time soon, Carleson did draw on her experiences working abroad on the front lines of international conflicts when she created her teen character Laila, whose family is forced from an unnamed war-torn Middle Eastern country into uneasy exile in the U.S. when her ruling father is assassinated in a coup. Adjusting to an altered life with new rules and choices on everything from food to friendship, the previously sheltered Laila struggles to come to terms with information about her father’s brutal reign. She soon finds herself in the middle of a conspiracy involving CIA operatives and rebel factions.

But it’s Laila’s daily struggles to find her place in a foreign world that Carleson says resonate with many of her own experiences as someone who lived and traveled abroad. “Though nothing in my biography is parallel to hers, her disorientation—her reactions are based on my own sense of dislocation and bewilderment.” Carleson also interviewed friends and acquaintances who’d moved to the U.S. in their late teens. What struck them, she says, was always the little things. One friend, newly arrived from Bulgaria, gave her a great detail; she needed something so simple, “just a bottle of shampoo…but at Wal-Mart she was confronted by a wall of products and burst into tears. It was just too much.” Stories like this connected the author to her own memories, and reminded her how small details have the power to capture the personal stories at the edges of large political dramas.

By telling Laila’s story—that of a teen living on the periphery of war—Carleson personalizes history, offering young readers a vivid glimpse of what might otherwise be only a distant headline. Many in the young adult audience lack a personal connection to contemporary wars. “Unless you have a parent who’s been deployed, that personal connection….For this generation, war is a far-away concept.” Laila’s story invites readers to consider the daily impact of war: “How do you manage without a fridge when the power’s out for three months?…These are the things that affect you on a daily basis. American teens are fortunate to be removed from war’s ugly realities. That’s why I wanted to tell the story in little details. The small details you most need to confront when living on the edges of a war.”

Carleson says creating this book was often a struggle: “I had a colicky little baby! So I wrote most of this book with a baby strapped to me, walking on a treadmill, my laptop propped up in front. When you read the book’s dedication, ‘For Kai, who was there for every word,’ well, that was literally true.” The book’s short chapters (some even a page or paragraph) reflect her stressful circumstances: “I was so terribly sleep deprived. I could only tackle one little short chapter at a time. Ultimately I think it worked; thankfully, I wasn’t trying to write a grand historical epic.”

Laila’s story closes as she faces an uncertain future, but with a hopeful heart. Initially, Carleson’s editor encouraged her to come up with a more defined ending, but the author says she “pushed back a little.” To make the ending too concrete “would be unrealistic for a confused, baffled but determined 15-year-old. I felt like the only realistic end was to have hope and to want to do better. I never gave her a more defined future because I don’t think anyone—teen or adult—would be able to walk into that world with an agenda. This was the only realistic ending that felt true for me.”

Asked whether her ending also leaves the door open to taking up her character again, Carleson sounds genuinely surprised. “Oh boy, first time I’ve even thought about it! I don’t think my brain works in series. It’s not on my to-do list. But I never say never.”

Carleson can say that she’s “well into” her next project: another teen novel, though she says it’s “extremely different. It’s very dark, very edgy, and for the upper YA audience.” Titled Placebo Junkies, it’s about people who “make a hard scrabble living as test subjects.” And now that her son is no longer a colicky infant, will that make things easier?

Carleson just laughs. “Now I have a frantic toddler! So maybe the chapters will be even shorter!”

Jessie C. Grearson is a freelance writer and writing teacher living in Falmouth, Maine. She has co-authored two books and several essays on intercultural subjects and reviews art, books, and audiobooks for a variety of publications. She is a graduate of The Iowa Writers’ Workshop.