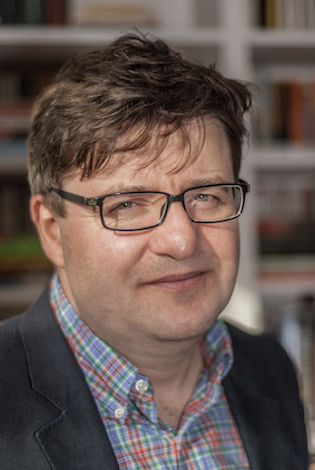 Tolstoy believed that history is the consequence of “vast, amorphous and indecipherable” social movements interpreted at risk. Though no less circumspect, Malcolm Gaskill compels events to coalesce, and be revealed.

In Between Two Worlds: How the English Became Americans, Gaskill assays the English experience in America during the first 100 years of colonization, chronicling the arduous physical, emotional, political and religious challenges that beset a large and varied company of 17th-century pioneers who were very much strangers in a strange land.

But Gaskill approaches the record from a fresh tangent, reminding us that few histories have focused on the interplay between the colonies and England, between landscape and distance, self-image and colonizing fervor.

“It started off as an attempt to write a British history from another perspective,” says the author, professor of Early Modern History at the University of East Anglia. “It can sound churlish when you say ‘I'm just doing British history transposed to another place.’ But in a sense that's what I have to keep reminding myself that I am doing.

“Ultimately, I can't do anything else. I'm not an American with a lifetime of being in that culture. So it's rather an odd enterprise. I consoled myself all along with the thought that the things that would make me feel that this was potentially an intellectually dangerous exercise was also perhaps going to be its unique selling point. This was the area that others might not want to stray into.”

Richly detailed, Between Two Worlds involved years of research—and not a little trepidation.

“I've never written narrative on this scale before,” says Gaskill. “It's been a long haul, a draining experience, and an act of 'colonization' in itself, stretched over a period of about eight years. This book has taken me out of my comfort zone. It's such a solitary occupation, and you're always seeking out people who will help confirm that you are moving along the right lines and that it is a worthy enterprise. You waver a bit from time to time, wondering if this is really a job for an American colonial historian.”

A Fellow of the Royal Historical Society, Gaskill is the author of four books, among them Witchfinders: A Seventeenth-Century English Tragedy. His latest venture required a broader mindset: Between Two Worlds is as much a mercantile and religious history of the colonie

s as a cultural one. It also reflects a measure of irony, such as the yearning of first-generation colonists for an earlier incarnation of England, trying to rekindle it in North America even as England itself was experiencing transformative change.

“This is something that I really tried to capture in the book,” Gaskill says. “From our standpoint, the 17th century feels kind of archaic. But when one relocates to the 17th century and looks forward, it is a different matter. I have always been interested in the 17th century as a modern period, where people were being overtaken by modernity and inevitably in those circumstances, people become nostalgic.”

Like many works of history, Between Two Worlds started with what Gaskill calls “a nagging question or a glimmer of curiosity that leads you to look a bit further.”

“What I wanted to do was connect colonial history with the British social history that I knew so well. I wouldn't say I did it with an altruistic missionary zeal, but I did want to demonstrate to myself and others that there was a sort of British history that was transplanted that really needed more investigation,” he says. “I wasn't looking for the creation myth of the USA, which so often this migration has become. Rather, I wanted to ask readers to imagine a world where England was where the U.S. is now and where the U.S. did not exist, and that this colors the way the story is told. I wanted to inspire in readers that kind of historical imagination.”

Gaskill always had in mind a structure for the book spread over three generations. But his narrative strategy was not preconceived; it emerged in the writing.

“I'd written that book about the social and emotional consequences of the English Civil War, through witchcraft, and at the local level. But every time I researched it there was always this sense that some people in the 1630’s, especially Puritans, felt that England was going nowhere and they really had to go somewhere else to be who they wanted to be.”

Bill Thompson writes about literature, film and the arts.