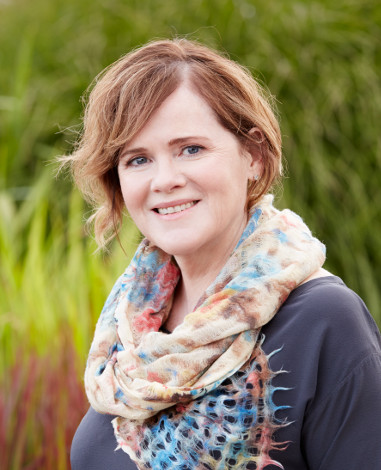 “You don’t owe it to me to read my book,” Semple says over lunch at Tilikum Place Café in downtown Seattle one sunny September day. “I owe it to you to get you to the end of my book. You don’t owe me not to just go, ‘Oh fuck,’ and throw my book across the room if it’s boring—if it’s like taking your medicine.

“I have students,” she continues, “and I [ask them], what if the reader gets bored? When they’re like, Well, I want to write this anyway—then find a new job. You’re not cut out for this. And it’s so mean, but I think really you’ve got to find something else to do, because how dare you? I’m not here to read your book, you’re here to entertain me. I’m not here to do you a service, you’re here to do me a service—get with it.”

This fall, Semple is at your service with a new novel so distinctive, well-crafted, and uproarious—essentially, so generous—Kirkus proclaims: “This author is on her way to becoming a national treasure.” Today Will Be Different is her first fiction since Where’d You Go, Bernadette, the sophomore smash nestled in the New York Times bestseller list from 2012 to 2013.

“I’m an entertainer, and I think that really did come from being a TV writer,” says Semple, whose credits include Arrested Development, Saturday Night Live, and Ellen, among others. “In the early days I would never say that, because I would feel like it would make me less of a serious writer. Now I’m proud to say it—god, what greater gift can you give to someone than a book that’s entertaining? I’m very at peace with that and feel like I can say it without qualifications.”

Like its predecessor, Today centers on a Seattle transplant navigating mores, motherhood, affirmation, and art, and entertains from start to finish. But Eleanor Flood is no Bernadette Fox—she’s less than half the misanthrope:

“My whole life, I’ve been liked,” Semple writes. “Okay, I’ll say it: I’ve been adored. I don’t understand why, on account of my disgraceful personality, but somehow it works.”

Eleanor is a critically acclaimed graphic novelist and high-flying TV creative who traded the writers’ room—slinging expletives, poring over storyboards—to make a family in a Seasonal Affective Disorder city. She has a hand surgeon husband named Joe, a charming elementary-schooler named Timby (“I was named by an iPhone,” he offers.), and a lugubrious but beloved pooch named Yo-Yo. They live in tony Lower Queen Anne, near the Space Needle (and Tilikum Place Café).

Despite the privileges and perks, the daily downshift has taken its toll: she’s lost all enthusiasm for sex with Joe. She can’t face lunch with fellow mother Sydney Madsen (“steady, earnest, without a speck of humor, and talked...very...slowly...as...if...her...platitudes...were...little...gold...coins,” she writes). Her graphic memoir manuscript is egregiously overdue.

Those are, more or less, the first words that poured out when Semple sat down to write the novel 18 months ago. She sees Today as the product of a highly specific time in her life—one she already feels estranged from and wistful for.

“The book is about a lot of things to me,” she says, “like why I’m so tormented despite being so privileged. It’s about why I’m so distracted, and kind of underground, and not so present as I should be, and it’s really largely to me about self-will versus god’s will, attachment versus non-attachment, all the different ways of saying that, as a philosophy of life. And I feel like I don’t know the answer to any of those.”

Semple gives her grapples with family and fulfillment to Eleanor, along with some more specific elements from everyday life: the private poetry lessons she was taking at the time; the funny things she saw on the street.

“You have to have faith in yourself—‘Here’s the funny thing I saw today,’ I’m just going to throw that in,” she says. “It’s never like, ‘Oh, here’s this thing I’ve been meaning to say that I’ve really worked out.’ I’ll toss it all in, keep it loose, and then, the way I see writing, it’s like those how-to-tie-a-knot diagrams: in the rewrite, I’ll just start pulling at the ends of it to tighten it up.”

You have to have faith, but you also gotta have guts. While Today is more puzzling than prescriptive, it lays plain the artist’s charge:

“I don’t mean to ruin the ending for you, sweet child, but life is one long headwind,” Eleanor tells Timby. “To make any kind of impact requires

self-will bordering on madness. The world will be hostile, it will be suspicious of your intent, it will misinterpret you, it will inject you with doubt, it will flatter you into self-sabotage. My God, I’m making it sound so glamorous and personal! What the world is, more than anything? It’s indifferent.

“...[Y]ou have a vision,” Semple writes. “You put a frame around it. You sign your name anyway. That’s the risk. That’s the leap. That’s the madness: thinking anyone’s going to care.”

Bravery is what an artist owes the world.