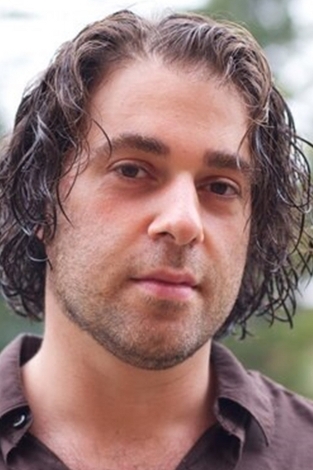 Michael Barakiva had always intended to return to the story he began in 2014 in his novel One Man Guy. “Because I'm a science fiction fantasy nerd,” he explains, “my imagination functions in trilogies.” The director and writer even had a general idea of what the next two installments would involve: a breakup between his characters in the second and a reunion in the third. But whenever he tried to make progress, he found himself stuck. Something wasn’t working. It would take an unsolicited Facebook message from a young reader for things to fall in place.

“The message said that they should break up and get back together,” Barakiva says, “and, it sounds so stupid, but I was like, Oh yeah that can happen in one book.” In Hold My Hand, the picture-perfect teenage romance readers saw unfold between bookish Alek and skater Ethan hits a major stumbling block as details from the latter’s past inadvertently emerge. As Alek struggles with their relationship’s new turn, his life is thrown into further disarray as he finds his sexuality suddenly, if not entirely unsurprisingly, pitted against his Armenian heritage and religion.

Barakiva admits that, at times, these elements made his novel a difficult project to work on, because both are so deeply entwined in his own life. “I was profoundly and deeply betrayed by the person I loved most in the world,” Barakiva begins. “And then I was incredibly cruel in the process of the forgiveness.” Acknowledging the way that society often casts those who are betrayed as victims, he wanted to give space to explore what he terms the “culpability of the victim”—not in the sense of enabling the betrayer or inviting a betrayal, but in the way he or she responds. “When I am betrayed, I lash out with honesty as my weapon, and honesty can be as cruel of a weapon as deceit.”

That is certainly the case with Alek, who sees himself as taking a moral high ground in response to the pain Ethan subjects him to and, in the process, becomes blind or uncaring to the pain he is inflicting himself. For Barakiva, exploring such a muddied reality was important, especially given his audience of young readers.

So much of what we see, he explains, sends the message that to forgive and go back to someone “makes you a coward.” Especially with teenagers who are perhaps experiencing their first relationships or falling in love for the first time, there’s a tendency to see things in strict terms of black and white. “But life has so many shades of gray, and it was really important for me that both characters were culpable, and both had to be forgiven.”

Barakiva also leads his readers into the gray space where religion and sexuality meet. Perhaps given his loving and accepting family, Alek is taken aback when the Reverend Father of their Armenian church, who is friendly and progressive and seemingly tolerant of Alek, remains committed to the traditional teachings that condemn homosexuality. “There would have been nothing easier than writing a homophobic religious figure,” he says, but that would have been reinforcing an oversimplified version of reality. Not all religious people who oppose homosexuality are mean, nor must they be driven by hatred. The situation is more nuanced, and change can take time—especially when, as with Armenians, who were the first nation to accept Christianity, “identity is wrapped up in Christianity.”

“When I first started working on One Man Guy,” Barakiva reflects, there were no Armenianisms in it, and it was a very bad book. It was so impersonal.” In drawing on his own very specific experiences, not only is Barakiva able to create authentic and relatable characters, but he’s also able to help educate a new generation. “It is such a gift,” he concludes, “to be able to share the culture I grew up with.”