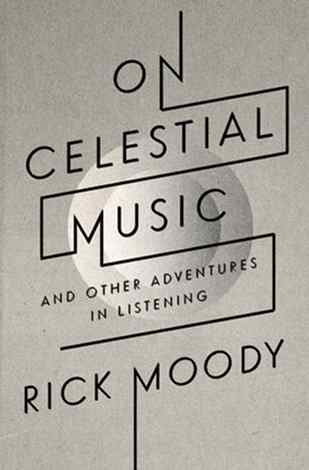 Though some novelists treat nonfiction collections as a busman’s holiday or career stop-gap, it’s plain from the engagement and incisiveness of these critical essays in On Celestial Music that Rick Moody cares as passionately about music as much as he does fiction.

The author of The Ice Storm (1994) and Purple America (1997) began his career with an award-winning novel steeped in what would late be called “indie rock” (Garden State, 1991). Here, he runs the gamut of music he loves, from Meredith Monk to Wilco, from Otis Redding to the Lounge Lizards. As the most inspired music writing generally does, he makes the reader want to listen afresh through Moody’s ears.

No! That's one reason I like popular music. Because it's disgraceful in "high art" circles. But I could, in fact, disagree with the premise here. I wrote an essay last year about how the literary writers of the ’60s and ’70s took rock ’n’ roll somewhat seriously and made it fit material for what they did, and that in turn created a generation of novelists, Jonathan Lethem, Christopher Sorrentino, Dana Spiotta, Jennifer Egan, myself, many others, who read those greats of the ’60s and ’70s, in the process coming to think of pop music as pretty accessible material. My essay was about Thomas Pynchon, Grace Paley and Donald Barthelme and their engagement with rock ’n’ roll. If they could write about it without having their "high art credibility" tarnished as a result, I expect I can, too.

For those who have yet to read the title essay, what do you mean by “celestial music?”

That title essay is about conceptions of heaven and about what kind of music might be played in heaven. It was an attempt to imagine on a rather ambitious scale. No one has much tried to pin down exactly what the heavenly tabernacle sounds like. There are hints in scripture and elsewhere, but not much more than that. So I tried to come up with some ideas, some of them purely facetious.

Has your passion for music diminished or changed since you first fell in love with it?

It's different now. My crushes are less violent, less idolatrous. But I think my capacity for intense aesthetic engagement with music, over the course of months, is even greater. For example, I have been very interested in Sun Ra in the last few years. It took me until my late 40s to get what people were talking about. And now it's a thrill to me that there are hundreds and hundreds of hours of music by Sun Ra for me to come to. I don't need to do it all in one three-month period. If it takes decades, that is fine.

How do you think your writing about music differs from the conventions of music journalism. You write, for example, that “Rolling Stone, even in the seventies, was contemptible.”

I don't care what everyone else likes, I certainly don't care what the publicists want, and I have no truck with the record companies at all. If they all fail, it will be fine with me. I only care about the music, the emotions of the music, the complexities of the music, and I mostly only care about things I love. I think that Rolling Stone crack might be one of the few highly judgmental lines in the book, although I was kind of hard on Depeche Mode there for a page or two. Mostly what I do is different because I do it for one reason only—I love the music.

So much music writing these days tends toward capsule reviews and Twitter observations.  Do you feel the culture is poorer with the decline of thoughtful critical response?

Twitter makes me want to heave. This is part of why I have been writing 10,000-word music essays on The Rumpus for free! Career suicide! Absolutely stupid, really! But I don't have a short attention span. I have a really LONG attention span, and I think there are some few others out there who are the same. Eventually the world will come around to our way of listening and thinking, and I hope I will still have enough wits left to be part of that particular cultural revolution.

Longtime music journalist Don McLeese is the author of Dwight Yoakam: A Thousand Miles From Nowhere, out now, from the University of Texas Press.