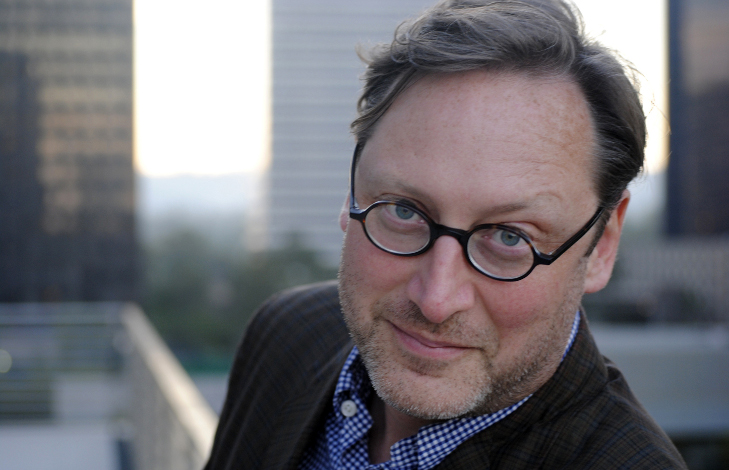 When Amnesty International solicited short stories for an anthology on government and identity, M.T. Anderson’s submission stuck out like a sore thumb.

“They were thinking more about identity in terms of surveillance,” says Anderson, who’d recently returned from Russia while researching Symphony for the City of the Dead: Dmitri Shostakovich and the Siege of Leningrad. “I was thinking about the intersection of identity, colonization, and art.”

Anderson is the author of more than a dozen wide-ranging titles for children, middle-graders, and teen readers, including National Book Award winner The Astonishing Life of Octavian Nothing, Traitor to the Nation, Volume I: The Pox Party, and the Los Angeles Times Book Prize winner Feed.He serves on the board of the National Children’s Book and Literary Alliance (NCBLA) and lives near Boston, Massachusetts.

The Amnesty submission wasn’t collected—it was expanded. Anderson’s new YA novel, Landscape with Invisible Hand, is set in a future America dominated by the vuvv, “a squat little race of financial world-builders who have a network that extends across a lot of the galaxy,” says Anderson (who goes by Tobin).

Sure, the vuvv’s technology eliminated work and disease. But it also eliminated jobs and made the cures unaffordable.

“[O]ur leaders were making speeches about how America’s middle class had to stop dreaming and start learning how to really work,” he writes in the voice of Adam Costello, the book’s 18-year-old narrator. “By that point, I’m not sure there really even was a middle class anymore—just all of us hoeing for root vegetables next to our cracked above-ground pools.”

With both parents unemployed (one MIA), Adam, a talented artist, supports his family by selling viewing rights to a highly sanitized version of his romantic relationship with his girlfriend Chloe to vuvv pay-per-viewers, who delight in “classic” American culture (think: 1950s drive-in drivel).

In his spare time, Adam paints landscapes, real and imagined. (Each chapter of the book is named for an original artwork.) It’s an art form so antiquated, Chloe likens it to “wearing garters to hold up your socks.” In response, Anderson writes:

I shrugged. “I guess I want to make something that’s actually in the world. Instead of just seeming to be real when you have on the right helmet.”

“Adam is pretty serious about finding an artistic root for himself as a teen,” says Anderson, who counts that characteristic as his protagonist’s finest trait. “I also like his generosity, especially as—through the book, more and more—he’s able to recognize that other people have different artistic goals than he does. That everyone has their own kind of legitimacy, everyone has their own story that they’re trying to tell.”

Encouraged by his art teacher, Mr. Reilly, to enter an interstellar art competition judged by the vuvv, Adam wavers between whether to enter his surrealistic or

realistic landscapes. Mr. Reilly urges him to enter the latter—scenes like “The Parking Lot of the Looted Old Stop & Shop” and “Autumn in a Field Near a Discharge Facility.”

“ ‘They show was it’s really like, now that the vuvv are here,’ ” he writes. “‘They show how Earth has changed. This is what will make you stick out. Be yourself. Tell our story. Tell the truth. That’s what wins, in art: the truth.”

“My books often start with a kernel of anger or dissatisfaction at the way the world works,” says Anderson, citing the hyper-stratification of American society as one applicable irritant, “but, at the same time, I want to capture the things that make life wonderful.”

Therefore, he says, “So much of this book ended up being about self-expression—even the way we now have to become artists sculpting our own lives online.”