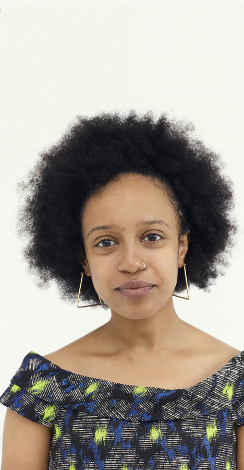 “I don’t know if you speak French,” Tamirat says by phone from Paris, where the Boston native has lived for the last seven years, “but there’s this expression that literally means a ‘yellow laugh.’It’s the kind of laugh you get when you’re also grimacing and cringing. Just the fact that the French have an actual expression for it says everything. They know we will need to have a yellow laugh at some point.”

The story begins on the subtropical island of B—, where an unnamed American teenager and her father, an Ethiopian emigrant, have recently relocated.

“My father and I are the newest and least liked members of the colony on the island of B—,” Tamirat writes. “My first memory is of vomiting upon contact with the ginger-drenched air. When I told the others at dinner, I was informed that it happened to everyone, I was nothing special. No one had yet discovered the origins of this heady perfume, and the search gives my days a purpose that is all my own.”

As readers learn in “Part I: On the Subject of How My Father Found Us a Home and I Followed Him There,” the incorporation of this rather inhospitable utopian colony on the prosperous island of B— has something to do with a man named Ayale.

“When I started writing the book,” says Tamirat, who was a student in the Columbia University MFA program at the time, “I had this idea of exploring what it would mean [for Ethiopia], one of only two original countries in Africa that was never colonized, to try to take on a colonizer role in the Western world. But it was still very much a story about the narrator, who was always unnamed, and Ayale. For me, the relationship between them is in that central place.”

“Part II: On the Subject of Where We Were Before and Where We Were Before That” transports us to Boston, circa 2003, where the narrator lives with her distant but loving father, with whom she is adolescently at odds. (Her mother disappeared when she was 6.) Brainy and bookish, she’s often alone before and after school.

On a walk through the city one day, she’s shocked to hear strains of Amharic coming from a group of men in a pay-per-day parking lot. But the parking lot attendant clocks her ancestry from a mile away.

“I hadn’t yet discovered the phenomenon by which Ethiopians recognize fellow Ethiopians by face and manner alone; I might have actually believed my parents and myself to be the only Ethiopians in the world,” Tamirat writes. “The concept of ‘Ethiopia’ seemed too fantastical to entertain as anything but a lovely origin story. I perhaps even thought this man was a mind reader, a prophet. I wasn’t entirely wrong.”

Ayale is both the parking lot attendant and the unofficial mayor of the local Ethiopian community. Need surgery or school fees? Reconnaissance or reassurance? Cup of sugar? He’s the man. A natural-born hustler with an extensive stateside network, Ayale has one foot firmly planted in Ethiopia, whose current events he follows as intently as sports fans track scores.

“Ayale is kind of a King Lear figure,” Tamirat says. “In so many African countries, and certainly for Ethiopia, there are these people, men and women, who kind of take on the role of mythic proportions within their community, the way they speak, what they do. At such a young age, especially for someone like the narrator, who is very alone, how could you not be dazzled?”

Ayale quizzes the narrator in Amharic. She, displaying a lively intellect, is found worthy of his attention. Their friendship forms over subsequent trips to the parking lot. She does her homework in the attendant booth while he imparts Eritrean history, culture, and politics.

“I began to forget the order of the American presidents; the Johns, Williams, and Georges were displaced by tribes in the north, iron-working Jews, battles with Italy that left Eritrea out in the cold,” Tamirat writes. “Ayale’s favorite emperor was Menelik because he was an excellent administrator, and he knew that my favorite was Tewodros because he was fucking crazy, shot himself before the English could, and overall had spirit.”

“When you have friends who are much older than you and have done it all, they have massively high expectations for you,” says Tamirat, who was raised, in part, by a grandmother she considered to be her best friend. “I wanted to explore the dynamic of someone looking for a parental figure in a world where her mom has left for we don’t know where and her dad is doing all that he can but she can’t see that. Ayale assumes the weight of father, mother, professor, best friend—whatever role she’s decided to ascribe to him—but, on top of that, he’s kind of secretive, kind of weird.”

Is it weird to ask your friend to deliver a few unmarked packages around town? When Ayale starts asking for favors, the narrator is too enamored to think so. But the more she works for Ayale, the more disapproving her father becomes. The more suspicious he is, the more protective Ayale acts.

It all adds up to the kind of caper that could result in one finding oneself on a far-flung island, cursing the sand.

As Kirkus writes in an admiring review, The Parking Lot Attendant is “captivating for both its unusual detail and observant take on teenage trust. Curious and delightful.”

“When I was younger, I had the idea that you got to know people and you understood them,” Tamirat says. “I was really sheltered. I read tons of books where you had these friendships between women, where they knew each other so entirely, so implicitly—I really longed for that, to have people around me who knew me, and I knew them.”

If there’s a lesson to be learned in The Parking Lot Attendant, it’s perhaps best stated by the immortal words of Michel de Montaigne: “Que sais-je?”

“As I get older, I realize that each of us is an unknowable island,” she says. “We can’t know everything. We know barely anything. Just fractions of each other, really. And we barely know ourselves.

“What interested me was the idea of, What would it mean to be a teenage girl who wants to understand everything?” she says. “She wants to understand who she is, who her father is, what this country people keep talking to her about is (Ethiopia), what this country she lives in is (America)....What would it mean to be in the center of this unknowing darkness? To try so hard to acquire knowledge, to bring illumination, and end up realizing, in fact, that the more you know, the more you learn, the more the darkness spreads?”

Megan Labrise is a staff writer and the co-host of the Fully Booked podcast.