The Necessity of Tree-Hugging:

A few excellent new books about the environment 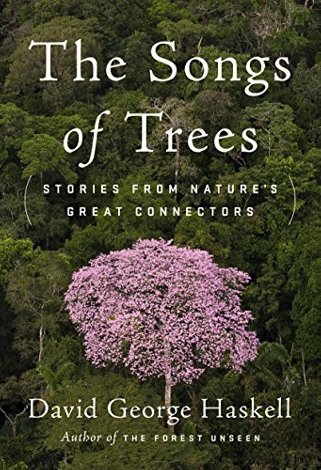 Donald Trump and his cohorts are at it again, continuing with their efforts to roll back nearly every gain that the Obama administration was able to make regarding the environment and climate change. As Slate notes, Trump’s latest executive order, “much like the disastrous and cruel Muslim ban…attempts to fix a problem of Donald Trump’s invention.” Given the current administration’s head-in-the-sand stance on climate change and desire to continue down an unsustainable path, I believe it is more important than ever to support books that champion nature, the outdoors, and environmental causes. In April, it’s all about the trees.

On April 4th, Viking published The Songs of Trees, the second book by David George Haskell, following his exquisite The Forest Unseen. In his latest, the biology professor emphasizes the interconnectedness of everything in nature, with a focus on the trees that, our reviewer noted, “give us crucial information about our shared environment. Through their roots, they send chemical messages that influence the growth of other vegetation and the behavior of resident animals.” We know about the benefits of trees regarding air quality, but Haskell goes deeper, and his “message is straightforward and important: we are a part of nature, and the trees with whom we share our environment are vital parts of our lives.”

A week later, Bloomsbury released Witness Tree by Lynda Mapes, an environmental reporter for the Seattle Times. The narrative is a delightful story of the author’s relationship with a 100-year-old oak tree over four seasons. “A meticulously, beautifully layered portrayal of vulnerability and loss, renewal and hope, this extensively researched yet deeply personal book is a timely call to bear witness and to act in an age of climate-change denial,” our critic wrote in a starred review. Indeed, this book—a well-rendered blend of science, memoir, and a powerful ecological message—is particularly welcome in our current time.