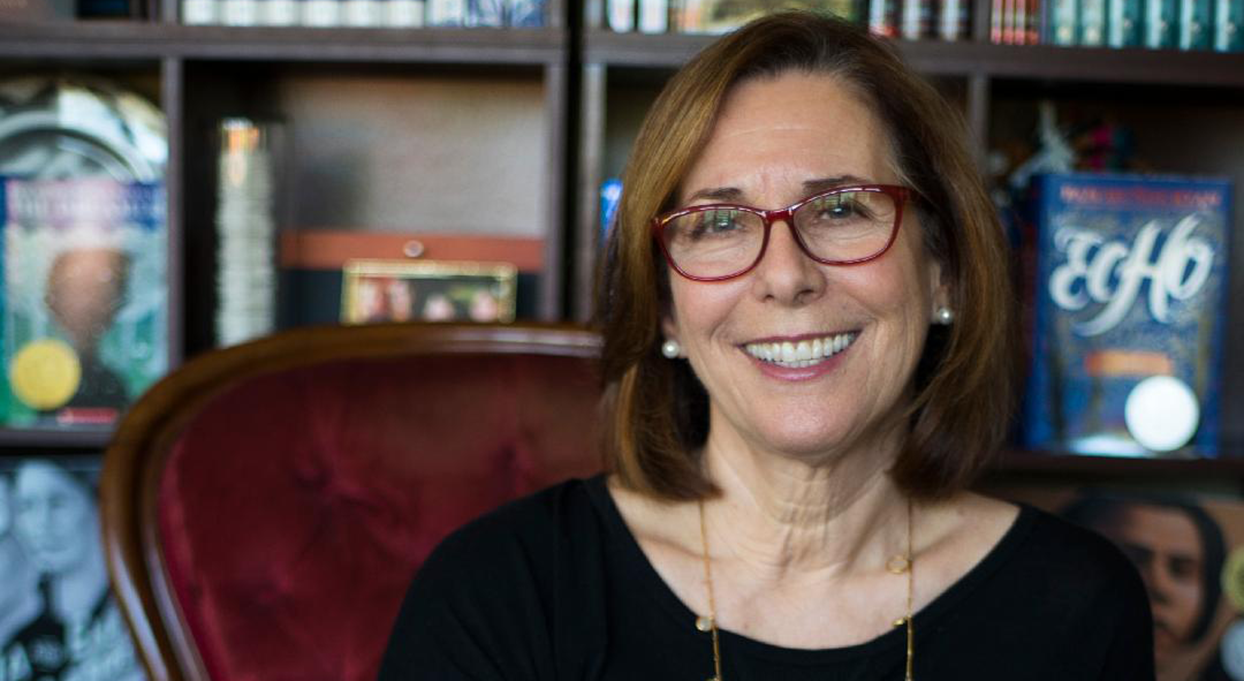 People flee from their home, forced out by circumstances beyond their control, with nothing but a few salvaged possessions and the dream of a better future. “This story is an old story and a new story,” says Pam Muñoz Ryan. “It happened decades ago, it is happening now, and it will continue in the tomorrows to come. It is happening all over the world and even in your own backyard.”

It’s also the plot of Ryan’s new middle-grade novel, Mañanaland (Scholastic, March 3). Eleven-year-old Maximiliano Córdoba lives in the village of Santa Maria, where he spends his time playing fútbol and helping his dad build bridges. As he prepares to try out for the village team, Max discovers a family secret: His relatives are part of a secret group of Guardians committed to helping the Hidden Ones, people fleeing oppression in a neighboring country.

For Ryan, the book started with a simple image: a boy and his dad crossing an ancient bridge, the boy’s claim that he wanted to hold the future in the palm of his hand. “I suspected it was going to be the premise for a novel, but I didn’t know for sure,” says the award-winning author, who has received the Pura Belpré Medal, the Newbery Honor, and the Kirkus Prize. “I didn’t know exactly where the story was going to take me or how it would develop.” The bridge scene remains at the beginning of the novel, but the plot spins out from there. When a Hidden One shows up at his door, Max must decide whether or not to help her.

This familial conflict was inspired by Ryan’s own childhood. Raised in a multiethnic family in Bakersfield, California, Ryan was 12 the first time anyone talked to her about her biological father. “Children are actually very astute,” she says. “And I knew that it was on the periphery of my life, but I obviously didn’t have the details that would help me grapple with what it was that nobody wanted me to know.” Max’s journey in Mañanaland is very much about filling in the unknown details of his family story and coming to terms with the ways in which it is not what he thought.

In the process he also has to grapple with the line between the real and the fantastical. How many of his grandfather’s tales are true? Is Mañanaland a real place? Can Max find his mother there? The book’s blurry line between fantasy and reality was inspired by both the tradition of Latin American writers like Isabel Allende and Sandra Cisneros and Ryan’s own childhood credulity. “I was a believer,” she says. “If I went to a slumber party, any slumber party, and they told a scary story, my parents had to come get me because I believed everything.”

Despite its fairy-tale aspects, the book lacks the kind of obvious happy ending readers might expect. To Ryan, the key was instead offering hope for the future. “I want to give my characters tools and traits that let the reader know they have the ability to continue on,” Ryan says. “I think that kind of resolution is important for young readers.” She hopes that, in seeing how characters learn to cope and move forward despite obstacles, young readers will feel empowered to do so themselves.

The other message she hopes readers will take from Mañanaland is one of compassion. Despite the political relevance of Max’s story, Ryan didn’t intend to make a statement about immigration. (In fact, she started writing the book before the 2016 election.) “I set out to write a parablelike story about the age-old condition of people needing protection and those who protect. I didn’t consider the Hidden Ones immigrants per se, because immigrant insinuates that you are immigrating specifically to a certain place and you’re going to stay there,” she says. “These people, they’re almost like fugitives. They’re in a state of flux and on the move. But along the way, no matter where they end up, there are people with compassion who help them. I hope the reader recognizes that Mañanaland is not only a place, but a universal state of mind that we all strive for—safety for ourselves and our loved ones, life without fear or repression, acceptance and a feeling of worthiness.

As she was writing, Ryan kept coming across news stories about people getting arrested for leaving jugs of water for people crossing the Mexican border. This attempt to criminalize an act of compassion struck her as particularly inhumane. “We’re all part of something bigger than borders and walls and rules,” she says. “We’re all part of the same family called humanity.”