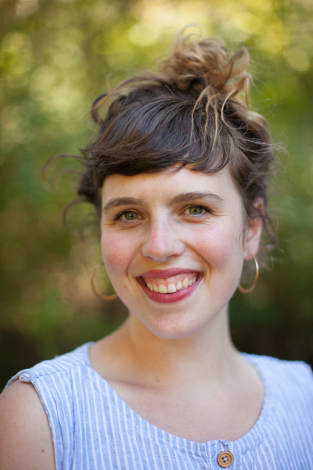 Growing up in a lush green, fern-filled Pacific Northwest forest was nothing short of magical for author-illustrator Phoebe Wahl: When she left letters for fairies in her family’s backyard, the fairies wrote back. Sometimes, they left tiny gifts.

“I didn’t know it was my dad at the time,” says Wahl, who Kirkus reached by phone at home in Bellingham, Washington. “I thought they were letters from actual fairies.”

The experience inspired “Backyard Fairies,” an autobiographical zine for adult readers published on Wahl’s personal website in 2015. It was the year of her picture book debut, Sonya’s Chickens, which won the Ezra Jack Keats Book Award for New Illustrator and was named a Kirkus Best Book of 2015, among other honors.

The warm critical reception told Wahl it was time to retell “Backyard Fairies” for young readers in rhyme.

“Have you ever found, while out on your own....A tiny, magical somebody’s home?” Wahl writes in her new picture book, Backyard Fairies. “Or sensed a fluttering, flickering flight…gone when you turn, just out of sight?”

The red-haired, ruddy-cheeked heroine senses magic afoot in the lush forest surrounding her home. Convinced fairies frolic just beyond sight, she sets out to find them one moonlit night.

“You search and you search till you just can’t see straight, only turning back home when the hour grows late,” Wahl writes.

On the preceding page, the girl sits at the base of a tree with elbows on knees, as a raucous fairy rave rages in the root system. (“WHERE ARE THEY?!” Wahl hand-letters in curling capitals.) The colorful illustration, depicted in watercolor, colored pencil, and collage, features a diverse array of fairies with a variety of body types, skin tones, hair colors, and ages. (There are even a few non-humanoids.) Juxtaposed with illustration reminiscent of traditional European folk art, bold inclusivity engenders beautiful incongruity.

“I love all the traditional Celtic, European folklore,” Wahl says, “but those illustrations lack inclusivity in body type and skin tone. There’s no excuse not to expand that, to include a wider variety of figures.

“It’s really important for me to include a variety of body types in all my characters, whether they’re fairy or human,” she says. “[It’s] taking the things I love and have a nostalgic attachment to, but can also be somewhat problematic, and working toward something a little bit better and more inclusive.”

For kids of all ages, shapes, and sizes—denizens of far-flung forests or urban explorers from the five boroughs of New York City—Backyard Fairies is for you, Kirkus writes in an admiring review: “This gently magical outing will appeal not only to longtime lovers of European folklore, but also to fans of the popular ‘fairy door’ phenomenon.”

“Even if a kid reading this knows fairies aren’t real,” Wahl says, “there’s still something to be said for the fact that this girl is very determined and intuitive, too. You never see another human character in the book—she’s the only one, and there’s not really any backstory of why she’s wandering the woods by herself, because I wanted to set that up as being totally acceptable. It’s a story about independence and trusting yourself, being determined to find that magic that you know is out there.”