Piecing Poems in ‘I Lay My Stitches Down’ 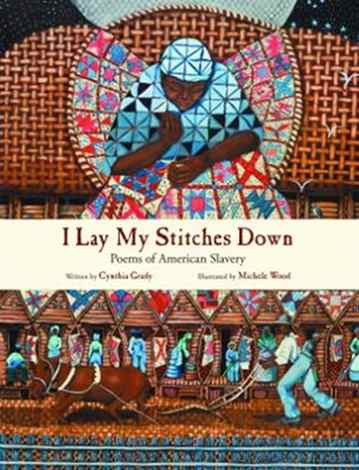 Middle school librarian by day, poet and avid quilter during her off hours, Cynthia Grady presents “the threads that weave the fabric” of an enslaved life in I Lay My Stitches Down: Poems of American Slavery.

This evocative first collection of poems, which we called in a starred review, “a powerful grouping of thought-provoking poems and brilliantly designed paintings,” also features gorgeous artwork by Coretta Scott King and American Book Award–winning artist Michele Wood (I See the Rhythm, 1998, etc.).

The synergy between Wood’s ornate, lushly colored paintings and Grady’s finely hewn syllabic verse is so powerful that readers young and old will turn from poem to image and back again to discover multiple layers of meaning. Since much of the collection incorporates elements from the world of quilting, we were as interested in learning more about this first-time poet’s relation to this popular American craft as to her take on crafting verse for children.

See more books that celebrate the African-American experience in poetry.

What inspired this collection?

I was doing a lot of quilting while developing lesson plans for a quilting class with middle schoolers, and lines of poetry kept coming to me while I was preparing for that class. I would sort of take notes on these lines that would come up. After I had a few, especially the line “my thimble, thread, and needle comfort me,” I looked at it, saw it was iambic pentameter and realized I had to write some sonnets about slavery or quilting or both.

So that’s how it began, and I chose the quilt-block names as poem titles from the very beginning. Traditional quilt blocks all have names, and many have more than one. For example, Underground Railroad also goes by Jacob’s Ladder—regional differences and things like that.

The block is the pattern that repeats?

Yes, you can make a quilt from one block, and it makes a bigger design when you connect them all together, or a sampler quilt, where each block is different. So I was thinking of working on a sampler with the kids because with a sampler quilt, each block teaches you a different skill—you’re working with curves or triangles or squares.

By the time a girl grew up and had her own house, she knew how to stitch all kinds of things. I had in mind that idea of teaching different blocks, and I was thinking of Lucille Clifton’s Blessing the Boats, where she had poem titles named after traditional quilt blocks, and I thought that was cool. I saw that a decade ago and always remembered it, though those were different kinds of poems.

So originally you tried the sonnet form and then what happened?

Yeah, I began writing in a sonnet form in iambic pentameter, but sonnets have 14 lines, and mine kept coming out to 10. I couldn’t seem to stretch my little stories to 14, but then I thought 10 lines by 10 syllables worked well in another sort of way to extend the quilting metaphor.

It’s fascinating how structure plays out in these poems. Is it important in your work in general?

I like working with structure a lot. I have written all kinds of free-verse poems, but I like the confining nature of structure. I think it helps release some creative energy, and that’s fun for me.

I think form can be very liberating, and unless you attempt its confines, you’ll never know. Is structure as liberating in quilting?

It can be. It can really be freeing because then all of your energy goes into color and contrast. You have your constraints of pattern, and then you work with color and contrast and textures of fabric, so it’s very similar.

Now did you and Michele collaborate at all?

Actually, we did not collaborate, but she did show me her sketches as she went along, which I know is highly unusual in the business for a first-time author. So basically, no, although I was privy to what she was doing. And I couldn’t be more pleased with what she came up with. She’s amazing. Her paintings are so rich, and it’s wonderful how she included the quilt-block patterns in each painting.

In your author’s note, you say you want to avoid the controversy surrounding slavery and quiltmaking. Can you say more about that?

There are children’s and adult books that claim quilts were used in the Underground Railroad as signals to safe houses and things like that. It’s such a compelling story, and I was very interested in it, but the more research I did, the more I found there’s little historical evidence for it. And though I’m not a historian, I do know that if there’s little evidence, then historians don’t want to make a claim, yet some have.

So I started talking with museum curators, and one I met was really adamant that I not even introduce the topic to children. The reason I sort of put the disclaimer in is because this book really doesn’t address the claim at all, and I thought some people might be thinking it does because of the title. Quilting is really a metaphor for the poems and not taking a side on the issue. I think there’s controversy about it in quilting circles and with historians of the Underground Railroad as well. I didn’t investigate it all that thoroughly because it’s not the story I wanted to tell.

What do you hope readers take from this then?

That there are a lot of different approaches to learning a thing. We don’t learn just from textbooks. We learn from art and music and memoirs and poetry. I like, in my own writing, drawing from all disciplines to create something, and I hope that shows through—that all disciplines inform each other.

Which do you find more rewarding to complete, a poem or a quilt?

What an interesting question…I certainly can complete a poem more quickly. I’ll tell you, that’s a great question because I usually hate my quilts when I finish them, and I hated this collection of poems when I finished it. In fact, I knew it was finished because I hated it. I didn’t think it was bad. I was just sick of it—like when I’m working on a quilt.

For example, I made one that’s in shades of brown and rust, orangey kinds of colors, and by the time I finished it, I was so sick of those colors that I didn’t want the quilt. That’s one reason it’s good to make quilts for other people, so you don’t have to see them anymore! But seriously, I think I find more satisfaction in poems overall.

Erika Rohrbach spends her days helping international students at the Fashion Institute of Technology in New York City and her nights and weekends in northern New Jersey.