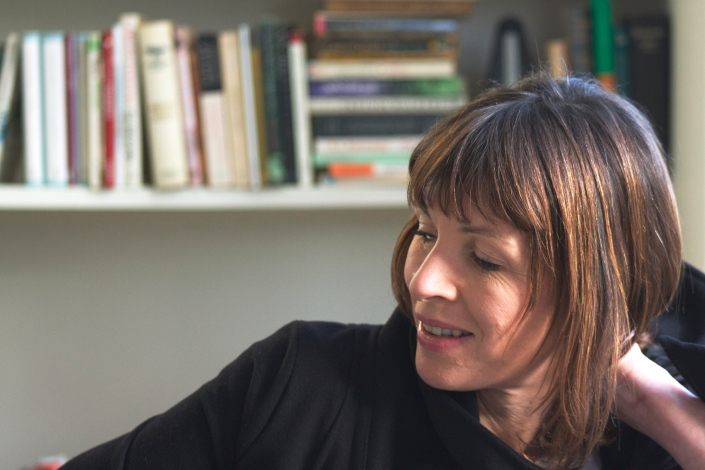 In the beginning is the word—not a person, self, or character. And so it is with the newest work of fiction by Rachel Cusk. Transit, her latest novel, is the middle novel of a trilogy that began with 2015’s Outline. In Transit, after a divorce, the narrator, Faye (whose name, as with so many traditional fiction markers, is largely absent in Cusk’s treatment of her), has moved to London with her two sons, though the shabby state of the council flat she bought necessitates repairs that send the boys to live with their neglectful father for a time.

“My own shedding of the notion of original character has had to occur through a process of adhering to and then escaping from conventions of form,” Cusk, who lives in London, says by email. “I have struggled with my own profound conventionality by making a sort of attack on myself in autobiography. These are essentially psychological positions taken in the attempt to deal with an identity that has continued to reveal or betray or unravel itself through living, through personal experience.

“I haven’t been able to ignore or detach myself from such things as motherhood and marriage,” she adds. “As a writer I’ve had to be ‘I’ in those experiences, rather than displace them on to some imagined character, because it is my belief that that is how those experiences are lived. In the end I managed to bring those two positions together in Outline, but it’s been interesting continuing to write in that form and seeing what a tendency they have to separate themselves again. Sometimes I have to sit down and write a ‘straight’ piece of memoir to get them re-aligned.”

So this trilogy returns Faye, in part, to a post-Sheherazade storyteller, bearing witness to the stories of those in the world: life as a story. It’s not about grand fabulist tales, but almost a repurposing of William Carlos Williams’ notion of “no ideas but in things.”

This erasure of the overt, performing narrator leads to a narrative backdrop or curtain, a series of events or stories projected onto the narrator’s screen. In thinking of the trilogy as a whole, Cusk explains the process as one in which “the novels attempt to describe the loss or death of an original idea of self. The question of what human character is, how we come to possess it, and the extent to which it is a prison to which the door stands open, is the central preoccupation,” she says. “Character is the central device of narrative: what I’m trying to do in these books is put narrative back inside character, rather than have character at its service. The development really comes out of the obligation to formulate a mode of living that is beyond character.”

Specifically of Transit, Cusk says that the novel addresses “the struggle with that obligation and with the necessity of continuing to be in the world despite the things that have happened to you. The third novel questions the value of past suffering and the possibility that one might acquire honor from it.”

The narrator’s personal story is mostly gleaned in the spaces between the scenes. In fact, the novels are a series of scenes: telescoped and largely framed off from anything other than what is happening in the camera eye of the telling and speaking. Cusk explains the approach of the trilogy as “a caesura between these works and my earlier writing which was the result of what might be called a crisis of utterance. I suddenly understood that my management of reality was absolutely flawed, because it relied on me to ‘tell’ it. I had managed that flaw far better artistically than personally, because my understanding of and faith in the techniques of writing was far superior to my grasp of the techniques of living. I was able to be objective as a writer. But the flaw was there all the same, and in the end my writing collapsed. I lost my voice for a while. It came back when I fully and finally understood that human life is only a story when you tell it afterwards.”

Memory, truth, and language—and their unreliability—come into play. As the narrator asserts to a friend, “none of us could ever know what was true and what wasn’t. And no examination of events, even long afterwards, was entirely stable.” Cusk agrees. “I personally don’t set very much store by memory,” she says. “In fact, I have quite a bad memory, or rather my interpretive instinct is so strong that I instantly dismantle and file what strikes me as significant and leave the rest unprocessed. That is obviously a function of character and it carries certain risks, one of which is that I might fail to care properly about myself, and another that my view of the world might become too self-selecting. I have a pretty unshakable faith in the creative process but there are many examples—D. H. Lawrence is one—of that happening. People’s versions of things, and the way they tell them, are what interest me. Recently I heard my younger daughter telling the story of something that happened to her when she was small, when in fact it had happened to her older sister and she wasn’t even there. The funny thing was that the older one also thought it had happened to the younger one, perhaps because she’d heard it told that way. Even funnier was the fact that they did not regard my having witnessed it as conclusive evidence!”

Commentary on domestic life—our everyday relationships and the lives we create for ourselves—inform the novels’ thematic elements, even

as so much of that life is absent or dramatically staged as a series of nonsequiturs. “Part of what I’m edging towards in Transit is a commentary on the redefining of morality in our contemporary codes of conduct, most particularly in how we conduct ourselves in family life,” she says. “The disinhibition and rudeness of the downstairs neighbors represents one form of moral ugliness; the selfishness and faux-sentimentality toward children in the middle-class dinner party is another. It’s interesting to me that even in our political situation we seem to be offered the stark choice between these two modes of being. I often hear it said at the moment that these are the awful twin offspring of liberalism, but I don’t believe that at all. The liberal ‘reader’ of life is still there: it’s just that the characters have leaped off the page rather too convincingly. Outline was about the temptation to disappear, but Transit recognizes the obligation to act, particularly in the face of wrongdoing. I think perhaps this is a realization we are all in the process of waking up to.”

Even as Transit appears on book shelves (and receives glowing notices from reviewers), Cusk is already writing the third novel in the trilogy. “It takes me a long time to formulate a novel and then I write it very quickly,” she says. “I loathe any kind of performance—I even find it difficult to watch others performing—but I suppose writing is precisely that for me, a performance. I have to get it right in the moment or it’s no good.”