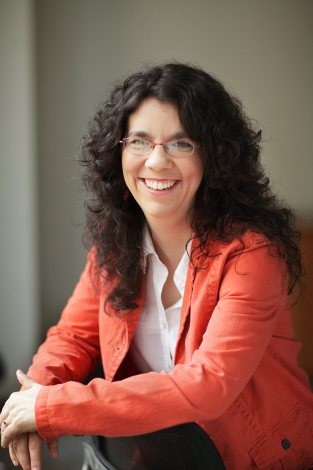 In the fantastical kingdom of Gorred, sometimes women are dragons. Sometimes they’re dragooned.

“I use fantasy to write what I would call ‘emotional autobiography,’ ” says Rachel Hartman, author of the New York Times bestselling Seraphina series, “where the events are not true—nothing in the books literally happened, my mother is not actually a dragon—but the emotion is true. And that’s what readers latch onto.”

Readers went wild for the twin tales of Seraphina, the intelligent, intrepid half-dragon protagonist of Seraphina(2012) and Shadow Scale(2015). In Tess of the Road, Hartman shifts perspective to tell the story of one of Seraphina’s human half-sisters.

The respective roles of the Dombegh sisters have been stone-set since childhood: Seraphina is “the smart one.” Jeanne, Tess’s twin, is “the good and pretty one.” And spirited Tess is “most likely to get spanked.”

“Mama had not laid it out explicitly, but she didn’t have to,” Hartman writes in Tess of the Road, “not when years of spankings had done the work for her: there was something particularly bad about Tess. She was singularly and spectacularly flawed, subject to sins a normal girl should never have been prone to. It was going to take far more work for her to get into Heaven than someone like Jeanne, whose goodness seemed to flow effortlessly from some deep inner well of virtue.”

By age 17, Tess is grappling with a significant share of trauma and grief. Due to a series of ignominious events in her early teens, she’s considered despoiled, fit only to become a nursemaid or a nun.

“I think a lot of people go through times like that,” Hartman says of young adulthood, “because you’re just heading out and have all these opportunities to make all these really spectacular mistakes.”

Because of those mistakes, despite being the elder twin, Tess is passed over so desirable Jeanne can debut at court. (Hopefully, she’ll make a financially advantageous match in the process.)

“This is a book that I really could have used at a certain point in my life,” Hartman says. “Not so much that I think it would have saved me from heartache—I would have made my own mistakes, Tess and I have a little bit in common that way—but at times when I was feeling despair that everything was falling apart, it would have given me some hope. Okay, look, there is a way out of it. Humans have passed this way before. The road is hard, but it’s there, and it’s not impossible.”

Tess doesn’t meekly greet her parents’ plan: she dons an exquisite pair of leather boots (a gift from Seraphina), flees her family, and hits the open road for a destination unknown. On her epic, swashbuckling perambulatory adventure, Tess will learn to honor the experiences of others, as well as her own.

“Like Tess’ journey,” Kirkus writes, Tess of the Road is, “surprising, rewarding, and enlightening, both a fantasy adventure and a meta discourse on consent, shame, and female empowerment.”

“She often felt, early in the morning, when the world seemed most malleable,” Hartman writes, “that she contained these different potentials, and more. It wasn’t merely that she could be anything, but that she was everything, all at once.”

“One of the big lessons from this book,” she says, “is that we have to be the protagonists of our own stories. When you let somebody else define who you are, and turn you into the villain, you’re not getting to be the hero, and you have to be a hero to yourself.”

Megan Labrise is a staff writer.