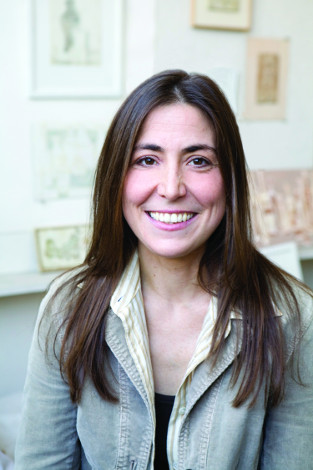 Ariana Grande’s doughnut licking would probably be just another poor choice of young adulthood, if not caught on video. It’s easy to judge, but few of us escaped youth without a few bad decisions—present company excluded, of course. Rebecca Stead’s new novel, Goodbye Stranger delves into the complicated issues of tech’s risks and rewards for today’s teens, as experienced by three seventh-grade best friends: Emily, Tabitha, and a cat-ear wearing Bridge, the book’s protagonist.

“It’s hard enough to build your identity in person, much less online,” Stead says, displaying a keen sympathy for the teen mind—so full of promise and challenging questions, yet still not always aware of an action’s consequences—while living in an state of technological self-surveillance.

Goodbye Stranger addresses choices and consequences without heavy-handed moralizing, even when one of those girls chooses to do something that will cause some adults to wince in aversion (or perhaps recognition). As the story unfolds, readers may argue over which decisions made by various adults and children are “right,” and if adults—and society today—really know best. Stead doesn’t offer clear messages but she does offer children and adults struggling with empathy, communication, and doubt.

“Messages lead to terrible writing, and that’s the last thing I want to write about,” Stead says. “What’s interesting are the questions. A message makes for a bad book.”

The question she wanted to address: “The way the adult community reacts when they feel they’re not in control, and the tools people reach for in that situation,” she says, and in turn, how those decisions affect teen lives. Stead creates a rich, rewarding literary meal out of modern tween life: family and phones, feminism and friendship.

For example, Stead’s main characters deal with hotly debated contemporary issues such as dress codes, and how those codes often become signals used to control young women’s bodies. After all, adults are the primary enforcers of social codes; contesting a ban on spaghetti straps is an affront to The Way Things Work.

The book came to her from a variety of sources, including tech- and dress-code items in the news. “An idea comes together and coalesces from a lot of little pieces in orbit, and they attract other ideas,” she says.

Stead speaks with me on the phone from her 16th-floor Upper West Side apartment where she lives with her two teen boys; the youngest just graduated from middle school. The kind, honest relationship between her imperfect characters and their flawed parents is full of thought-provoking honesty that rings true.

“I do think parents are a big part of kids’ worlds,” Stead says. “Writers like to get them out of the way, and I understand why—so kids can be the active decision makers, and I have loved many a book like that. But I also really like creating worlds where there adults who are part of the kids’ world. They’re not flawless, perfect adults, but they’re people. They’re part of the story. Maybe they’re not calling the shots, but they’re a part of what’s happening

Social media is a tempting tool for those tangling with the competing pressures of friendship, loyalty, and revenge. Even the book’s worst social aggressor isn’t painted as a one-dimensional villain, but a complicated girl.

“When you’re unhappy, it’s really hard to be kind,” Stead says. “A person can have a year where they’re just difficult and can never be generous, and maybe even want to inflict pain. If that person grows up, in a few years, she can be in a completely different place. Most of us have had moments like that, maybe rem embering something I did in middle school: “ ‘Oh, that was really yucky.’ ”

Stead wondered whether the book’s title was right. Then she handed an early draft to a friend’s eighth-grade daughter, who pronounced the title perfect for describing the turbulence of tween and teen years.

“She seemed to come away with some recognition about what is so difficult about knowing people and knowing yourself, especially when everything is changing quickly, usually for reasons completely beyond your control,” Stead says. From technology to tweenhood, divorce to decisions, Goodbye Stranger is just the start of discussion and debate. Just don’t let anyone Instagram you licking the doughnuts from the mother-daughter book group.

Lora Shinn is a former youth and teen services librarian and now writes full-time about literacy, health, and travel.