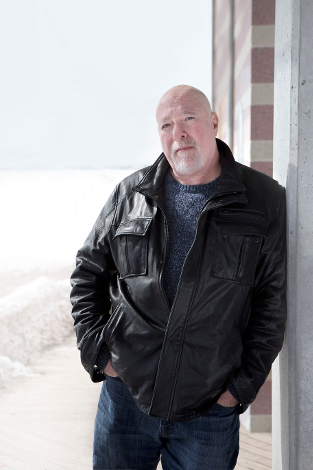 The late Robert B. Parker was a giant in the crime genre, well known to both readers and other writers alike for his laconic, iconic private investigators that include Spenser, Sunny Randall (created at the request of Helen Hunt, no less), and his last, brilliant creation: the troubled, conflicted small town sheriff Jesse Stone.

After Parker’s death in 2010, his wife Joan and sons David and Dan decided that Spenser and Jesse Stone would live on. Spenser, of course, carries on in novels written by former crime reporter Ace Atkins. But after three post-Parker outings by Michael Brandman, Jesse Stone has been tapped for more crime-fighting by Reed Farrel Coleman, whose credits include the widely acclaimed Moe Praeger series, three nominations for the Edgar Award, and a stint as the executive vice president of the Mystery Writers of America. When he got the call to “be” Robert B. Parker, he immediately said yes.

Coleman’s entrée into the Parker universe, Blind Spot, represents something of a diversion for Jesse Stone, even as it reverently depicts the small Massachusetts town of Paradise and its various denizens and watering holes. The book is more densely plotted, delving not only into Jesse’s past as a potential Major League Baseball player but also exploring his difficult relationships with women and his predisposition to drink alone. For Coleman, it was those aspects of Jesse’s character that made him a much more attractive subject than the long-lived Spenser.

“If you’re a writer, what would you rather write?” Coleman asks. “A character who is truly flawed and conflicted and can’t seem to escape his past, or a guy with the perfect girlfriend and perfect sidekicks who cooks the perfect food? There’s more elbow room in Jesse’s character than there is in Spenser’s. I frankly admire Ace Atkins a great deal for being able to do what he does.”

In the novel, Jesse makes a rare trip outside Paradise to New York City, where he reconnects with his teammates from the Albuquerque Dukes, the triple-A ball club where Jesse long ago ruined his shoulder in a play gone wrong. It feels very revealing for a character who rarely revisits his past.

“It was a choice I had to make for my own sake,” Coleman explains. “We both kind of had to go down this road together. It’s an odd way to say it, but I had to find Jesse, and Jesse had to find Jesse. It’s not easy to take over someone else’s character and one of Jesse’s touchstones is baseball. I’m a big baseball fan, and you can tell, because I know how to write about it. Jesse’s injury is one of the pivotal moments in his life and it’s a real Rashomon moment because everyone remembers it differently.”

Naturally, there is also trouble with women in the book, as Jesse reunites with his ex-girlfriend, Kayla, now unhappily married to his former rival Vic Prado, and dallies with Kayla’s spectacular blonde friend Dee Harrington.

“You have to have a girl from the past and I wanted her to be against type, because Jesse winds up with this bevy of blondes in all the books,” Coleman says. “Kayla is dark, and brooding, and not a blonde. It’s a subtle thing to ask what changed in Jesse. What happened to him also changed his taste in women.”Coleman is already contracted for three more books in the Jesse Stone series but fans of his Moe Praeger novels also get to look forward to a new original series starring a retired Suffolk County detective, starting with Where It Hurts.

“Gus Murphy is a Long Island cop that was in uniform for most of his career, did two years as a detective, and got out,” Coleman says. “He was the kind of guy who thought he understood the world. And then there was a tragedy. He goes from believing that he understands everything about the universe to having his world blown apart. Two years after this tragedy, he’s trying to rebuild his life by helping a small-time crook solve the murder of his son. It’s not so much a redemption story as a resurrection story.”

In the meantime, Parker fans can look forward to reading the next Jesse Stone novel, which Coleman says carries the working title, The Devil Wins, and focuses on Jesse’s right hand, Molly Crane.

“One thing that both the estate and the publisher approved of was the fact that I’m trying to get back to the tone of Night Passage and Trouble in Paradise, the early books,” Coleman says. “That’s where people reveal themselves the most—when there’s high pressure and the stakes are high and you’re playing with your own money and your own life. That’s where sensitivities are heightened and people are at their most jagged. That’s the spot I’m most comfortable in.”