Sean Hannity’s latest book, Live Free or Die: America (and the World) on the Brink, became a No. 1 New York Times bestseller shortly after its release in August. Salon reports that the Republican National Committee might have had something to do with that.

The RNC spent at least $159,000 on copies of the Fox News host’s book, which they gave as gifts to Republican donors. The committee also spent more than $26,000 on the book on Thursday. 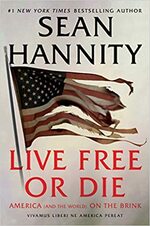 Hannity’s book urges Americans to vote Republican in 2020, according to its publisher, Simon and Schuster imprint Threshold Editions. A Democratic victory this year, Hannity claims, would be “a big step toward full-blown socialism along with the economic dysfunction and social strife that are its hallmarks.”

Salon speculates that the RNC could have spent, in total, more than $900,000 on copies of the book.

This isn’t the first time the RNC has spent large sums of money on a book by a prominent conservative. In 2019, the committee spent almost $95,000 on copies of Donald Trump Jr.’s Triggered from the Alabama-based book retailer Books-a-Million. And this summer, the RNC shelled out an undisclosed sum to buy copies of Trump Jr.’s Liberal Privilege: Joe Biden and the Democrats’ Defense of the Indefensible.