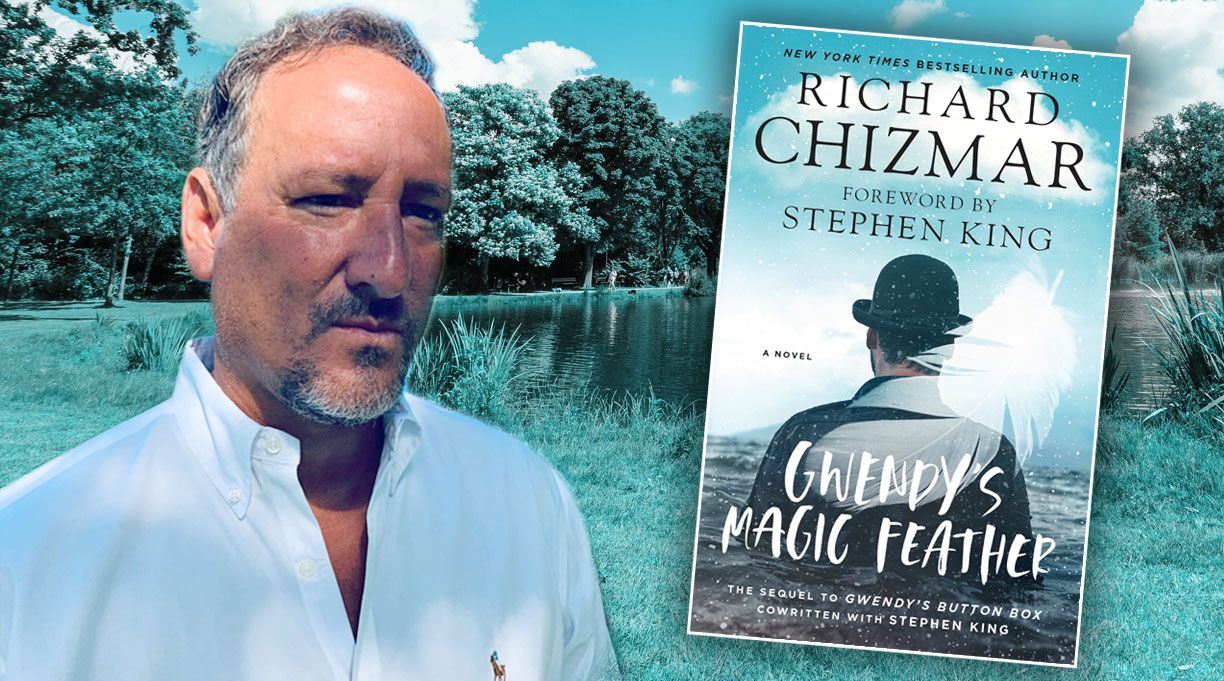 When it was released in 2017, Gwendy’s Button Box was an oddity for Stephen King fans. The fantasy book was short, for one thing, just larger than the size of a novella. And it featured a co-author who is not one of King’s writer sons: Richard Chizmar, owner of Cemetery Dance Publications.

Most notably, it was a story that King didn’t actually finish; he showed the incomplete story to Chizmar, who was able to complete the novel.

If Chizmar was intimidated by working with one of the world’s best known and best selling authors, it didn’t stop him from doing it again. Chizmar is back with King, who took an editor’s role, for a sequel, Gwendy’s Magic Feather (out in paperback from Gallery Books, Jan. 21), and there are plans for an as-yet-unwritten third book to complete the series.

The first book was about Gwendy Peterson, a young girl in 1974 who is given a mysterious box, by a mysterious man in black, which could cause global cataclysms. The sequel, which also takes place mostly in King’s fictional town of Castle Rock, Maine, follows Gwendy to 1999, when she’s become an author, filmmaker, and, most surprisingly, a junior member of the U.S. Congress.

Chizmar talked to Kirkus about the collaboration.

Was there any point in the writing of Gwendy’s Button Box that you or Stephen King thought it might be a story that could be continued?

No, never during the writing, and never when we actually finished. It wasn’t until a lot of reviews and reader feedback started coming in that people started calling for a sequel. I can’t remember what interview it was, but I know it was a joint interview, because Steve answered and said, “No plans to, but no plans not to.” My take on it was always a big smile on my face, saying, “I’ll do whatever Steve wants to do.”

What was the spark that brought you back to it? And what made you want to set it in 1999?

The spark was I was watching news one night before I fell asleep. I’m not heavily into politics or anything like that. But, obviously, with everything that’s going on in the world, my interest has been heightened. It was right after a lot of the new representatives were ushered in, and it was a story about the diversity of these newcomers. I guess it worked in my subconscious. I woke up early the next morning and I knew for some reason exactly what Gwendy had been doing over the last 15 years of her life and where she was in 1999. But there was still no hopes or intentions to write a sequel. As I often do, I just dropped a really brief email to Steve early that morning and I just said, “Hey, I think this is what Gwendy’s been doing.” And he wrote me back and he said, “Rich, that’s a great idea, a really great idea. I’m gonna be busy for the foreseeable future with Holly Gibney,” one of his characters. He said, “But I think you should write it.”

The story isn’t set in the current political moment, but it definitely contains echoes of where we are politically. Were you trying to avoid doing it overtly?

To a certain degree, it was me expressing my thoughts about what’s going on now, my overall views on things like bullying and racism and sexism and things like that, especially for someone in such a position of power. I know the editors who worked on the book didn’t want me to hit it too hard on the head and that wasn’t something I felt I had to sacrifice.

What is Stephen King like to work with as an editor?

He did a line edit and then he had a lot of humorous, very positive comments, which are great because I’ve got this hand-marked manuscript which I’ll throw in a drawer somewhere, someday my kids can pull it out and enjoy it. It was a lot of practical comments and some adverbs that he sliced, going back to his own writing where he talks about that. There’s about a half a dozen instances where he simply said, “WE KNOW” and scratched stuff out—his very kind of way of saying, “Hey dummy, you don’t have to be so explanatory.” I think Steve just really looked at it for story.

Are there any plans to adapt Gwendy’s Button Box or Magic Feather for TV or movies?

We have an agreement with the first one, which Steve’s agent took care of. The last I heard, it was one of the principals who worked with J.J. Abrams [on the Hulu show Castle Rock] and a couple of months ago they had just found a screenwriter to adapt it. I imagine I’ll see a script and see what they’re going to do with it next.

Has it been scary working in Stephen King’s world?

Not only is it Stephen King, but it’s Castle Rock. I still walk around in mild terror and hopefulness that people like it. Ultimately, he’s the one I want to please the most when it comes to writing about his world. He’s still waking up every morning and writing. I hope I’m doing the same when I’m 70 or 71.

Omar L. Gallaga is a technology, culture, and entertainment writer who has written for NPR, The Wall Street Journal, and the Washington Post.