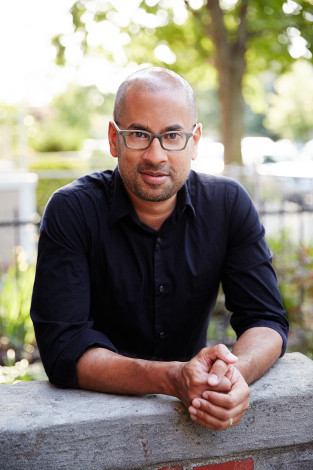 Photo courtesy of David A. Land

Every novel has its own particular research challenges. For Rumaan Alam to write his new novel, That Kind of Mother, the trouble was breastfeeding. “I felt there was a lot wrapped up in getting it right enough,” he says over diner pancakes on a Sunday in Brooklyn. “If it was going to be a kind of metaphor, I had to deal with it appropriately.” So he did what you do: He talked to people who had breastfed. He watched YouTube videos about breastfeeding. “I took my shirt off and I sat at my computer and I pretended to breastfeed a stuffed animal to see what it is like to sit somewhere with your shirt off and try to breastfeed somebody.” He wanted to understand the “literal choreography of it”—like, logistically: What do you do with your hands?

Alam knew he wanted to write about motherhood. That he himself is not a mother—a parent, yes, but not a mother—was part of the appeal. His first novel, Rich and Pretty (2016), followed the evolution of a friendship between two women. He writes about people you aren’t going to accidentally mistake for him.

“People are very literal readers for the most part, and the simple act of throwing my own voice into a character that’s a woman is so disarming to readers that they stop looking for autobiography and they focus on the text,” he says. Not that people read novels for psychological gossip about the thinly veiled lives of novelists, but, you know, “it’s sort of nice to feel like you have cover.”

“The other part is maternity occupies primacy in the cultural conversation around parenthood,” Alam says. “It’s just different territory. And it’s a funny thing to say, because I raise my children in a household without a mother”—he and his husband have two kids, now 8 and 5—“but maybe that reinforces my feeling that the mother is sort of like a primal preoccupation. Even as you read children’s books, there’s so much tied up in mommy.”

When we first meet Rebecca, a poet, conventional and pretty, wife of a British diplomat, she is quite literally giving birth. “Rebecca was more conscious of the bareness of her breasts than the desire on the part of the assembled party to see her body fold out like an O’Keeffe,” Alam writes. And then, afterward, there is a baby: Jacob, whose “skin on hers was euphoria, religion, blunt feeling.” It’s 1985; a picture of postpartum Princess Diana is tacked to the corridor wall. In the hospital, she meets Priscilla, her assigned lactation consultant, who becomes an anchor for Rebecca and, later—thanks to Rebecca’s powers of persuasion, or her entitlement—Jacob’s nanny.

Rebecca is white. Priscilla is black. The novel doesn’t go where you think it will.

Not that he had the whole thing planned out in advance. “I don’t really understand where all the individual pieces in the plot arrive from and how they start to play together, but at a certain point, when the work is going well, they do,” Alam says. It’s not an otherworldly sort of thing—“it doesn’t take over in some mystical way”—but “you start to see the logic.” The human mind is always looking for patterns, he tells me. “So when you’re writing a novel, you’re actually just assembling patterns.” In a gesture of thematic appropriateness, a child in the diner bursts into tears.

Rebecca and Priscilla develop an ease that feels, for Rebecca at least, like friendship. She does not want to think of herself as an employer, though she isn’t stupid. She wants to matter to Priscilla as much as Priscilla matters to her. When Priscilla dies in childbirth, Rebecca reflexively volunteers to adopt the baby. “You had to believe the deus would emerge from the machina or you had nothing,” Rebecca thinks. “It seemed, suddenly, quite clear, that Rebecca could be that deus.” Priscilla’s adult daughter, Cheryl, pregnant herself, uneasily accepts. And so the families become permanently entwined.

It is a deeply optimistic thing to do, to surprise-adopt a baby without second-guessing or, say, consulting your husband. But Rebecca is an optimist—why shouldn’t she be? Her career is comically successful—Alam is delighted by the old-school implausibility of her poetic fame. You can’t just be a princess, like Diana, and you can’t just be a “suburban housewife who is also a poet who comes to New York City and has coffee with the poetry editor of the New Yorker,” Alam says. “It doesn’t happen. But it does happen, to some people.” Rebecca is the kind of person for whom things have always worked out.

In another novel, a simpler one, this narrative—adopting Priscilla’s baby, becoming the white mother to a black son and a part of Cheryl’s life—would precipitate some kind of racial awakening. “But she doesn’t have that awakening. She really doesn’t. Because, to me, that’s more honest,” Alam says. “We understand in a way Rebecca cannot that the things she thinks are going to get better are actually going to get so much worse.” Al Gore isn’t going to be president. Bill Cosby, we know and she doesn’t, isn’t actually a role model for her son’s life.

“I think [Rebecca] has a desire to solve a problem that’s unsolvable,” Alam says. “That was her in-the-moment response to the circumstances, and even though it looks heroic in a certain context, it doesn’t feel heroic to me. It just feels impulsive. It’s a very open question for me, what the morality is of what she chooses to do.” She isn’t a hero or a villain; she does what she does because she did it. “That’s often how life works, right? You track back how you met your spouse, how you fell in love, how you chose a certain thing, and it’s just a series of steps you took. The heavens don’t part and there’s no sunbeam falling down, there’s no crystal revelation,” Alam says. So she adopted the baby. “Weirdly, it’s not special at all.”