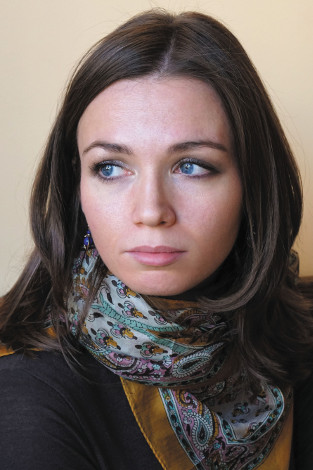 Historical fan fiction. That’s the phrase S. A. Chakraborty uses to situate her debut novel, The City of Brass, within the world of literature. “In Islam,” she explains, “we believe you have humans, angels, and all these other creatures, including the djinn, who are created from smoke or fire. They live alongside us, but you can't see them, and they live for hundreds and thousands of years. As a history lover, I thought that was just great. It would be so cool to watch the rise and fall of empires and nations—I tried to imagine how their civilization might have been built alongside ours.”

The City of Brass is a dazzling, enchanting, and utterly relevant story of an outwardly-appearing human’s entanglement in the fantastical world of Islamic mythology and lore. Nahri is living in Cairo at a time when Egypt is being manhandled, tugged between the powerful Ottamans and Napoleonic France, when she accidentally lands herself in the middle of a conflict stretching back to the time of Suleiman (or Solomon as most Western readers will know him best).

“People ask about the timing,” Chakraborty says, “and I thought that, if I set it in the early 18th century, I could have a reference to Napoleon in the first chapter, and then people might have a better idea of when this all takes place. But,” she adds, “it’s also the start, really, of Western colonialism in the Middle East. I wanted to set it at the dawn of a very new era for the region.”

While Chakraborty’s novel is classic fantasy—replete with magical healers, talking winged creatures, and ancient warriors with the power to bring stone statues to life—the themes that run like veins throughout the story are highly accessible, and that’s intentional.

“So often you see the same exact problems and themes just repeated again and again and again” throughout history, Chakraborty says. “I had readers of this book telling me, ‘Oh it sounds like Iraq and the United States,’ or ‘Oh it sounds like Israel and Palestine,’ or ‘Oh it sounds like the Persians and the Arabs 1300 years ago.’ A lot of these issues relating to occupation—they just resound throughout history. People take over places. I wanted to look not at the black and the white, but the gray of what that does to a place, what that does to generations of people. And just to complicate things even further, cultures mesh and they also oppose each other. I wanted a book that showed the messiness of that. You could think you were very right in your people's actions, and then you see they have costs. Even if you think you're right, people died, so how can you come to terms with that as a person? I wanted to explore those issues and I wanted to show them in a realistic way.”

The seeds that would eventually blossom into The City of Brass were planted more than a decade ago. After converting to Islam in her teens, the New Jersey native spent time studying abroad in Cairo, where she heard stories of ceremonies used to expel djinn from human hosts. Her interest piqued, she began to explore that new side of Islam more deeply, not knowing at the time that all she learned would one day make its way into a novel. “I had decided when writing this,” she says, “that those were my rules: if I couldn't find a reference to something in a text or in a story from the region, then I wasn't using it.”

By the time she began seriously working on the book, about three or four years ago, however, her life had changed. “I was older, I was in a different

place in my life, and I was a parent. I was living in Brooklyn and working with a youth organization through my mosque—and it became very disturbing to see, especially, how our young men are viewed in Western media. They're kids, they want to change the world, and they're burning with this desire to do good, and that's such a wonderful quality. But I’ve seen how that can be misconstrued while it's not misconstrued for teenagers of other communities. Our young people, our girls and our boys, should have representation, people that they can look up to as heroes.”

While Chakraborty’s novel, the first in a trilogy, will have broad appeal, she had a very specific audience in mind. “I really wrote it for my community,” she says. “I did not expect to ever sell this book. I wrote it more for myself and my friends and people who loved reading science fiction and fantasy but—and I've confronted this, and again I'm a privileged member of my community, a white convert—you open this book and it's cool and you're enjoying the story and then bam! There's a cliche. There’s something offensive. As a Muslim, it’s very frustrating to love this genre. There's only so long you can grin and bear it. I wanted people in my community to be able to read this and enjoy it.”