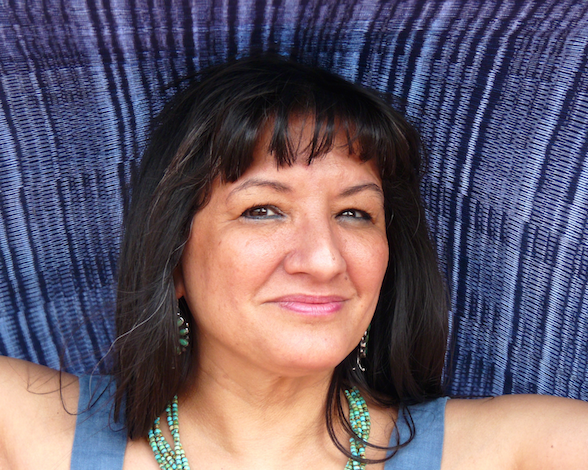 In “A Borrowed House,” the final essay in A House of My Own: Stories From My Life, Sandra Cisneros admits: “What I’ve longed for is a refuge as spiritual as a monastery, as private as a cloistered convent, a sanctuary all my own.”

From her breakout book, The House on Mango Street, to this new collection, Cisneros’ concerns about finding a home have been at the forefront of her work. Now, after decades of traveling and living everywhere from Chicago to Greece to the former Yugoslavia to Texas, this legendarily restless writer seems to have finally settled in San Miguel de Allende, Mexico. “I feel connected to [San Miguel de Allende] in a way I never have been in my life,” Cisneros says. “It’s like an oasis where the most exotic birds come to feed and drink water.”

As she’s settling into life in Mexico, Cisneros is not only finding a new purpose in her life, but also her longed-for spiritual home. “This is my time at a higher capacity,” Cisneros says. “I’m in sanctuary, and that’s to be here and create the work that’s the most important work in my life. I don’t know how it’ll manifest itself, but being in Mexico has given me a spiritual home, and the land here is beautiful and nurturing.”

A House of My Own, Cisneros’ new collection of biographical essays and reflections, written between 1984 and 2014, serves as a memoir of her restlessness and her movement toward happiness. Having received a so-called “genius grant” from the MacArthur Foundation, a National Endowment for the Arts Fellowship, and many other awards, Cisneros is one of America’s most celebrated writers. Her fiction, poetry, and children’s books have revealed Cisneros’ ability to render compassionate portrayals of family, childhood, and, as she says, “the strength of las mujeres bravas (courageous women).”

This new volume reveals an even greater scope to her talent and thoughtfulness. The topics of these essays range from tributes to authors or artists she admires to moving explorations of her family’s history and her reflections on the world around her. Cisneros has never been afraid to speak her mind, which had led to her being labeled “controversial” or “confrontational.” She addresses some of the rumors and gossip in the book’s introduction: “The memories I present here are a way of claiming my real life and differentiating it from my fiction, since there seems to be so much out there assumed or invented about me.”

Cisneros has been embroiled in a series of controversies her entire career that, in retrospect, don’t seem like such a big deal. Does it matter that one collection of poems is called Loose Woman? Her notorious formerhouse in San Antonio’s historic King William District was painted a bright, historical commission–aggravating violet, which has since faded to an acceptable blue. Reading this collection, Cisneros’ supposed provocations seem more nuanced and thoughtful, and the responses to her seem outlandish. As she says in the final essay, “Who would think violet would cause so much pain to others? But people who have no life of their own like to meddle in the lives of those who do.”

Which isn’t to say that she’s ready to stop speaking her mind. Cisneros isn’t content to let even her newfound love for San Miguel blind her to the problems caused by expatriates just like herself. “In the old days, people came [to San Miguel] because they admired the culture, so they immersed themselves,” Cisneros says. “But more and more recently they come because they can live in a bubble community, an invented Mexico where they can live cheaply. That’s insidious.”

Cisneros believes that writers “have to live truthfully,” and it’s her duty to help people understand the world around them—even if they don’t always like what they see. Over the course of our conversation we talked about gentrification in Mexico, “never feeling accepted” in Texas, her family’s decadeslong hesitation to embrace her writing, and the state of global politics. “My hero to me is Jorge Ramos,” Cisneros says about the Univision anchor Donald Trump kicked out of one of his press conferences. “He had the good sense to speak up in a time when, since 9/11, the press has been afraid to make dissenting comments,” she says. “We’ve all been cowed into submission. This is a time when the responsibility of a writer is so important.”

Even though she’s feeling more settled than ever, Cisneros turned 60 last year and holds her time to be very valuable. “I don’t feel frightened about the last days of my life,” Cisneros says. “But I do make choices now. I don’t tolerate fools. I don’t read foolish literature.”

Cisneros is feeling revitalized about her work and her purpose, yet a few of the earlier pieces in A House of My Own show Cisneros at a time when she wasn’t as comfortable with her role as a Latina in American culture. “I’ve always felt displaced and was made to feel by American culture as if America wasn’t mine,” Cisneros says. Her writing career can be read as her movement through anger at society toward finding peace. As Cisneros writes, “Rage is a place to begin, but not end.”

As we talk, Cisneros clarifies what she meant. “When there’s an injustice against you, you have to reach some place of truth and reconciliation to hear what caused that pain,” Cisneros says. “Then you transform it through dialogue, mediation. I’m not in that place of rage. I’m in a place of understanding that what happened to me had led me to where I am now.”

Living between two communities, and not quite feeling at home in either, has been one of the defining characteristics of Cisneros’ life and her work. As she’s entering her 60s, Cisneros is embracing the value of a dual perspective more than ever before. “I feel like I belong here [in Mexico] because I can get along with both communities. I can see things they don’t see. I’m like an amphibian that lives on land and in water.

“That’s the great thing about people with two homelands,” Cisneros adds. “They serve as bridges.” However, she’s thinking bigger than mere countries, she’s bridging cultures. “Now, I’m feeling like I’m from Las Americas, not one America. Especially now, I feel a spiritual mission to be a bridge between the communities that are living in susto (in fright).”

An important part of Cisneros’ bridge will be her collected papers, which were recently acquired by Texas State University’s Wittliff Collection. It seems that after spending 30 years in Texas, Cisneros can’t quite leave the state completely behind. Not that she’s ready to retreat into the archive herself. Cisneros has an energy and a sense of optimism about her work and her world that are enviable. “Most women at my age are settling down with their grandkids, and I’m just being born,” Cisneros says.

Cisneros is working on another collection of stories and another memoir focused more on love and relationships. Even though she has been canonized by the literary establishment, don’t expect Cisneros to kick her feet up any time soon. “Every single day I’m excited when I wake up and when I go to sleep.” This supposed provocateur has found a home, and now, so she says, she’s finding her voice. Fools beware.

Richard Z. Santos is a writer and teacher living in Austin. His work has appeared in the Morning News, the Rumpus, the San Antonio Express News, Kill Author, and many others. He recently completed his first novel.
MORE FEATURES
POPULAR KIRKUS STARS