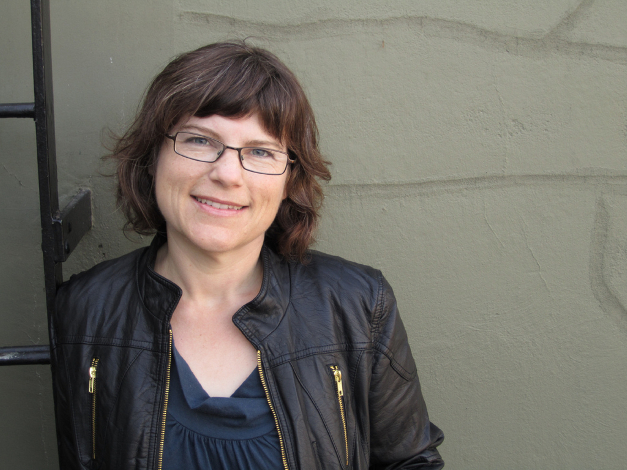 When Sara Zarr assessed her storied career in YA fiction (six books, seven years), she noted a trend in upward mobility.

“With each book, the characters got more and more middle- to upper-middle-class, which was not my background,” says Zarr, who grew up in San Francisco and lives in Salt Lake City. “That’s been the story of my life, starting out in an impoverished situation and then, gradually, changing—significantly, in my adulthood, with my writing career becoming more stable.”

Zarr is the author of five novels and one collaboration, Roomies (2013), with fellow author Tara Altebrando. Her debut, 2007 National Book Award finalist Story of a Girl, is about a teen from a working-class family. By the time she started work on The Lucy Variations (2013), which features a rich protagonist, writing had become her livelihood.

However, the breakneck pace of publishing annually began to take its toll: she turned 40, “kind of had a midlife crisis,” entered therapy, and seriously contemplated a career change.

“I ended up going to a support group for adult children of alcoholics,” she says, “and got into thinking about what it’s like for kids to grow up in an environment with that specific kind of chaos, where the adults in charge are addicts or codependent.”

That reflection inspired her most poignant, personal novel to date. Gem & Dixie is the story of Seattle sisters, children of essentially nonfunctional parents. Mom is often out late, seldom buys groceries, abuses prescription drugs. Dad hasn’t been heard from in years—ran off to Texas with another woman (one of many).

“Nine quarters,” Zarr writes. “They were the last of what had been left in the jar of laundry money that Dixie and I kept in our room, the jar that had never quite lost the smell of pickle relish. I counted and recounted the quarters in my pocket with my fingertips as the lunch line moved forward, as I’d counted and recounted them through English, physiology, and government. I counted because things in my life had a way of disappearing on me, and I’d learned not to trust what I thought was there.”

Nine quarters isn’t enough. Gem has to cajole a freshman into making up the difference, and such daily deprivations foster her cynicism. Dixie doesn’t have the same problem: popular and flirtatious, she routinely charms her way into free food.

When their father writes with the surprising news of his planned return, it’s Dixie to whom he addresses the letter. He knows she, unlike Gem, will view his return with optimism and excitement.

“Not everything is terrible, Gem. Some things are good,” Dixie attempts to convince her sister. “[She] folded her arms and moved away from me. ‘Why can’t you give this one little chance to be a good thing?’ ” Zarr writes.

“Until you’re an adult, you don’t really have the ability to look back and go, [my childhood] was hard and not normal,” Zarr says. “The tension between Gem and Dixie is Gem’s starting to see this is not the way things should be. Dixie is still holding onto the safety of [what she knows].”

Dad’s return sets off a chain of events sending Gem and Dixie on the run. Flight challenges their ability to rely on others, and one another, for the assistance they desperately need.

“From my experience, very few people get out of these situations without help,” whether it be from a counselor, family member, or other responsible adult, Zarr says. “Asking for help is part of surviving that—not even asking, but accepting. That’s still one of my biggest challenges, at age 46—accepting help, accepting kindness, accepting friendship.”