Author of QUEER, THERE, AND EVERYWHERE 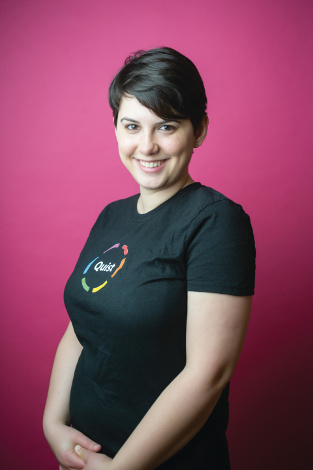 Oh, how I wish an anthology of LGBTQ heroes existed in the 1990s! Back then there were so few queer role models, I was convinced I couldn’t be a lesbian because I didn’t have short hair.

“Well, that’s why I wrote it—I wish I’d had that, too,” says Sarah Prager, author of Queer, There, and Everywhere: 23 People Who Changed the World, who came out as lesbian in 2000, at age 14. “You need role models, you need reference points, you need roots. It’s important to know you’re not a fad. Just because there weren’t as many out role models as there are now doesn’t mean there weren’t as many LGBTQ people throughout history.”

Conscientious, concise, and LOL funny, Queer, There, and Everywhere is the YA reference of my teenage dreams. Prager’s introduction challenges readers’ assumptions about the sexualities of historical figures (“Quick question: Was George Washington straight?” Prager writes) and explores queerness around the world, over millennia (“Bisexuality and polyamory were the norm in Han Dynasty China too [we’re talking BCE],” she writes.)

The chapters that follow delve into the personal lives, loves, and achievements of queer legends (Frida Kahlo, Harvey Milk), lesser-known leaders of antiquity (Elagabalus, Kristina of Sweden), and some real surprises (Abraham Lincoln! Eleanor Roosevelt!). Each is introduced in a portrait by artist Zoë More O’Ferrall adorned with their preferred name, lifespan, and a “tl; dr” synopsis of their contribution to queer excellence.

The book begins with Elagabalus (203-222), “the most scandalous teenage Roman emperor you’ve never heard of,” and ends with George Takei (1937-present): “social-media sensation Takei (rhymes with ‘gay,’ not ‘bi’) tests the limits of the American Dream.”

“It’s challenging a big responsibility to choose which stories from LGBTQ history you’re going to tell and how you’re going to tell them,” says Prager, who acknowledges that her intention to make the book even more geographically diverse was stymied, in part, by racism, sexism, and homophobia in the historical records. “Being a lesbian writer doesn’t mean I’m qualified to tell every transgender, bisexual, gay, etc., story. Thankfully, I had a lot of great readers, consultants, friends, and colleagues who helped me make sure the language for each community was as good as it could be.”

Prager, who lives in Connecticut, is an activist, educator, and founder of Quist, a free interactive app that makes learning queer history cool and fun. It was through Quist that HarperCollins children’s editor Sara Sargent approached her, to ask if she’d be interested in writing a queer history book for teens.

“She asked me how I would do it,” Prager says, “and I said it would be a collection of [biographies] that tell the stories of different eras and different struggles through individual lives….And we did that, but the number of people kept changing. When I pitched it, I first said five. Then it went from five to 10. Then it went from 10 to 23 and I was like, ‘Oh my god, this is a lot of research.’ ”

According to Kirkus’ starred review, the effort was well placed: Queer, There, and Everywhere “should be placed in the hands of every LGBTQ teen so they’ll know that not only are they not alone, but they have a rich and diverse history—as well as the straight ones, who should know that history too.”

“It’s very important not just for LGBTQ but also non-LGBTQ youth to know how much of the world has been shaped by queer people,” Prager says. “I hope they come away from the book realizing the computer (invented by Alan Turing), the high five (invented by baseball player Glenn Burke)—all of these different things you never would have thought—came from LGBTQ people. The world would be completely different without their contributions.”