Screener: The Sun Is Also a Star: 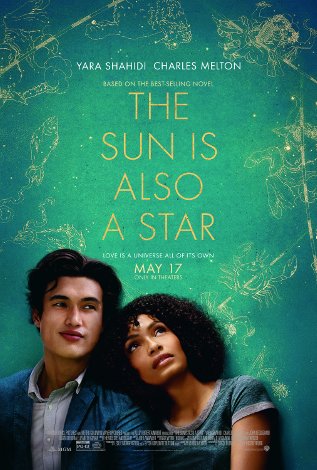 Kirkus’ home of New York City is, of course, the greatest place in the world, so it’s no wonder that so many movies are set there. Countless films have captured its one-of-a-kind charms over the years, from the vibrant heat-wave of Bedford-Stuyvesant in Spike Lee’s Do the Right Thing to the golden autumn leaves of Manhattan’s Central Park in Rob Reiner’s When Harry Met Sally to the Technicolor wonder of the titular 1950s borough in John Crowley’s Brooklyn, which was based on a Colm Toíbin book. The new film adaptation of Nicola Yoon’s YA novel The Sun Is Also a Star, which hits theaters today, has its flaws, to be sure—but its depiction of modern Manhattan is not one of them. It’s a gold-tinged wonderland. Not even jaded New Yorkers will be able to resist the visuals by Before I Fall director Ry Russo-Young and the enormously talented Teen Spirit cinematographer Autumn Durand, which feature striking parts of Macdougal Street, Koreatown, Grand Central Terminal, and the American Museum of Natural History’s Rose Center for Earth and Space.

In both the book and film, science-minded high schooler Natasha Kingsley’s family is about to be deported to Jamaica, due to her father’s undocumented status. (In the novel, the inciting incident is her dad’s DUI, which is a source of conflicting emotions for Natasha; in the movie, he’s swept up in restaurant-kitchen raid, which narratively simplifies matters.) She has an appointment with an attorney who may find a way out of this mess; if not, Natasha will be on a plane back to Jamaica the next day—a strange place to her, as she hasn’t been there since she was a small child. Daniel Bae is a Korean-American teen who has a college-admission interview with an Ivy League alum the same day; the alum turns out to be the same lawyer. (In the book, the attorney’s alma mater is Yale; in the film, curiously, it’s Dartmouth.) Daniel’s parents want him to be a doctor, but he’s an aspiring poet who’s unsure what he wants to do with his life. When the handsome Daniel spies the beautiful Natasha— wearing a jacket that unsubtly reads “Deus Ex Machina” on the back—he sees it as a sign and follows her. After he saves her from getting hit by a car, they end up spending the day together—exploring the city, having conversations about fate, and, of course, falling in love.

The dynamic between the two main characters—logical Natasha, who doesn’t believe in love or kismet, and the creative, more spiritual Daniel, who believes in both wholeheartedly—doesn’t leave a lot of room for surprises. Of course they’re going to end up together; it’s fate, after all. When a subway conductor in the film tells his passengers to “remember to open your heart to destiny,” you can be sure that Daniel will—and he makes reference to the quote a few times on his own, just to drive

the point home. (Personal note: “Stand clear of the closing doors” is another rule to live by.) Both the book and film require a high tolerance for hokeyness; when Daniel tells Natasha that they’re meant to be, after spending only a few hours together, you’re supposed to be swept away by their romance, not wary of his clinginess.

It doesn’t help that Riverdale’s Charles Melton, who plays Daniel, doesn’t quite have the charm to pull this sort of thing off. His karaoke rendition of Tommy James and the Shondells’ “Crimson and Clover,” for instance, isn’t nearly good enough to send Natasha into the happily-ever-after reveries that she has. (Still, the song choice is an improvement on the book’s on-the-nose “Take a Chance on Me.”) Black-ish and Grown-ish’s Yara Shahidi is much more engaging as Natasha—and her half of the relationship is convincing, at least.

The screenplay, by Girls Trip’s Tracy Oliver, takes out the backstories of minor characters that distractingly pepper the book, updates the setting (which appears to be the 1990s in the novel), and changes the ending. Neither resolution is likely or believable, though—and the movie’s raises some basic questions that go unanswered. Maybe it plays better if one opens one’s heart to destiny.