Screener: The House with a Clock In Its Walls:

There’s a clock in the walls of this house, and a warlock lurking about too 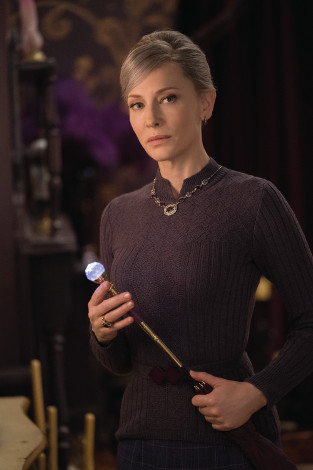 The first Harry Potter book was published in 1997, which seems like a lifetime ago—at least in pop-culture years. However, children’s books about spellcasting youth have a much deeper pedigree. One example is 1973’s The House with a Clock in Its Walls by the late John Bellairs, which spawned its own series. Its film version, starring Jack Black, Cate Blanchett, and Owen Vaccaro, will be released on September 21.

In the book, set in 1948, orphan Lewis Barnavelt goes to live with his quirky uncle Jonathan, a warlock, in the small town of New Zebedee, Michigan. They spend time in the uncle’s old, equally quirky house, mostly in the company of Jonathan’s neighbor, an elderly witch named Mrs. Zimmermann. The house contains many enchanted objects and books of magic. There’s also a clock somewhere in the walls, left there by a previous occupant—the late warlock Isaac Izard, who intended to use it to bring about the world’s end. Lewis, while messing around with magic, rashly brings Izard’s wife back from the dead. Soon, Lewis, Jonathan, and Florence are racing to stop her from bringing Isaac’s deadly plan to fruition.

The book’s Edward Gorey illustrations are characteristically dark, but the film has a bright, colorful sheen—one that brings to mind…well, the early Harry Potter movies. Still, it’s surprising coming from director Eli Roth, who’s best known for grisly horror films, such as Cabin Fever (2002) and Hostel (2005). Screenwriter Eric Kripke is the creator of the long-running, horror-themed TV show Supernatural. As a result, there are some new, creepy elements in this film that may scare the very young: evil, vomiting pumpkins; a woman with a rather gruesome shapeshifting ability; and a mewling baby with an adult man’s head.

There are also new, and numerous, poop jokes, and a problematic attempt at humor when nerdy Lewis is picked last for a gym-class team—after a child with a physical disability. The novel’s charms are subtler and more sophisticated; at one point, for example, Jonathan conjures illusions of the Spanish Armada and the Battle of Waterloo for Lewis’ amusement. That said, the movie has far more eye candy—specifically, a houseful of endless tchotchkes, including ever-changing stained glass and sentient topiary. The titular timepiece is a massive construction with gears the size of cars. In the more sedate novel, it’s a regular-sized, “plain, old, Waterbury eight-day clock.”

Still, Kripke does tighten up the original’s baggy plot. He makes a few changes that seem arbitrary; Lewis is overweight and moderately religious in the book, for instance, but not in the movie. A few key players, however, receive far more interesting backstories. Isaac Izard barely appears in the text, but in the film, it’s he, not his wife, who’s resurrected, and his cataclysmic plan is much more clearly defined. As Kirkus’ reviewer noted, “Bellairs doesn’t bother to supply either motivation or blueprints for…Izard’s antisocial scheme.” In the movie, this scheme is deeply rooted in the warlock’s war-related trauma, which Kyle MacLachlan portrays convincingly.

The film’s Mrs. Zimmerman (spelled with one “n”) is much younger, but she’s given a new, deeply tragic background—a family killed during the

Holocaust. Blanchett’s portrayal, as a result, is truly moving at times, giving the movie an unexpected depth of feeling. However, Black, as Jonathan, simply offers his usual frenetic performance in a slightly lower register. Owen Vaccaro’s Lewis is earnest but unremarkable—much like Daniel Radcliffe’s Harry in the first Harry Potter film.

In the end, it’s a shame that the movie’s Potterlike trappings invite such comparisons. Roth and Kripke seem to have forgotten that Bellairs’ book, despite its rambling plot, had a low-key pleasantness all its own: a quiet tale of ordinary people and extraordinary conjuring. The film often feels like Rowling-lite—and one does not simply walk into Hogwarts.