Searching for Meaning, Then Searching Again 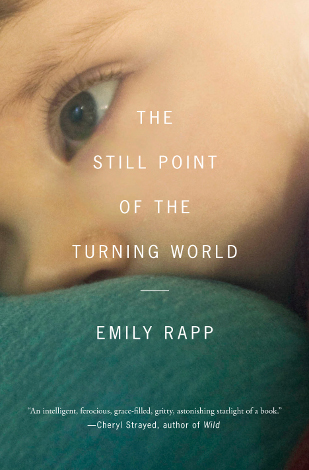 Memoirist Emily Rapp has the kind of brain that could drive a trivia opponent crazy. “It’s like one of those annoying bug traps that attracts useless information,” she says. But the seemingly disparate nuggets of information at Rapp’s fingertips—lines from Hegel and the Flaming Lips, from Frankenstein or from Tony Hoagland—helped Rapp avoid succumbing completely to grief, she says, after her son Ronan was diagnosed with a terminal illness. When she wrote her new memoir The Still Point of the Turning World, “I was in a state of active despair,” Rapp says. “I was searching for meaning and I wasn’t finding it but the act of searching was actually completely redemptive for me.”

She went back to the theology she had studied in college, to creation stories like Gilgamesh, to history and to literature alike. She searched for meaning, and for connections. And these references eventually became the thematic backbone of her memoir about Ronan, The Still Point of the Turning World.

Ronan, who died just weeks before the book’s release at the age of three, had Tay-Sachs disease, a fatal degenerative disorder. Rapp got the diagnosis when Ronan was 9 months old, in 2011, and, she says, began writing almost immediately. The book started as a blog; friends were calling constantly to check on her, but she didn’t always have the energy to respond. “Instead of responding on the phone and wailing or whatever I was doing, I would write these essays and put them on the blog,” Rapp says. She then handed a 500-page manuscript over to her editor, who helped her whittle it down by about half, then focus the narrative arc and structure of the memoir.

What emerged from that whittling is something unique: A memoir that opens with a clear narrative structure but moves into meditative, philosophical asides, abundant references and all manner of Big Questions. In this book, Rapp wants nothing to do with cliché or custom, and instead reexamines everything from the nature of grief to America’s goal-oriented version of happiness. And Rapp says it was Ronan who inspired her to write this way, mixing story with inquiry.

“I felt really committed to the idea of telling a story that was interesting and deep and philosophical and sort of humanly epic,” Rapp says. “I did not want to go into the maudlin details of Ronan’s demise because, frankly, I felt it was disrespectful to him as a person. It was really important for him to be portrayed in a dignified way.”

One of the points Rapp continually grapples with in the memoir is Americans’ inability to handle grief in a meaningful, honest way. She was astonished to hear people gawk and ask what was wrong with her baby, or, upon learning that Ronan was dying, respond with, “I would die if I were you.” (“It always felt like a fucking suggestion,” Rapp says now.) In the memoir, she presents careful deconstructions of the euphemisms we so often lean on, and effective arguments for, as she puts it, simply “being witness” to another’s grief, no matter what form it takes.

Rapp’s version of grief, she says, is why this memoir exists. “My version of grief manifested in going out into the world and putting out the kind of writing I had wanted to do before but was really cautious about doing, writing that was a blend of philosophy and religion and literature and other influences that weren’t just my voice,” Rapp says. “It was really about wanting to be fearless in my artistic life and that was a really freeing, liberating feeling. I don’t think I would’ve gotten it if I hadn’t been pushed to this emotional edge that parenting Ronan placed me at.”

But parenting Ronan was also full of joy, and Rapp says she hopes that readers don’t only take away the story of a dying child and a grieving mother. “I really hope people read the book and think, ‘That was a really amazing boy who had a really remarkably short life but who had such an impact on people.’ And not in this kind of angelic way, but he made people think; he made me think about what’s important,” Rapp says. “What he taught me, which is what I hope people take from the book, is that we don’t know how long we have, and it doesn’t mean we have to go out and be superstars, but to just be where we are and observant and be thankful for it.”

But in addition to observing her own life, Rapp says she also intends to shape it. “Ronan never had a chance to make choices,” Rapp says. Her job is to make choices that make her happy, even though she quite literally felt she couldn’t live after she received Ronan’s diagnosis. “Because he never got [choices],” she says, “I feel like it’s a way of honoring him.”

Thanks to the L.D. Clark writer-in-residence fellowship, Jaime Netzer is at work on her first novel in the tiny town of Smithville, Tex. Her writing has appeared nationally in Variety and Cowboys and Indians.