‘Something’s Coming,’ a History of ‘West Side Story’ 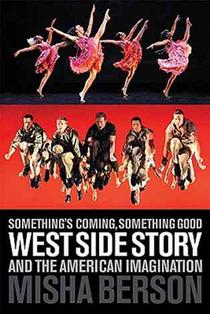 There were giants in those days. It seems almost unthinkable now that any single project could attract the combined collaborative efforts of the undisputed top dogs in any creative field, working at the height of their powers. Surely such a work would either collapse altogether under the combined weight of egos and ambition, or emerge as a Frankensteinian stitch-job, misshapen by the push and pull of various artistic agendas.

Read the last Popdose on 'Rogue,' the controversial new book about Sarah Palin.

But that's just how West Side Story, the groundbreaking Broadway musical, and later film premiering 50 years ago, came into being—as the group effort of a dream team, the like of which only comes along once in a hatful of lifetimes. The end result of the collaboration of composer Leonard Bernstein, lyricist Stephen Sondheim, playwright Arthur Laurents, and choreographer/director Jerome Robbins—all acknowledged titans in their fields—is that rarest of things, an aesthetic triumph that is also a massive popular success, a work that is both admired and beloved, a transcendent, seamless fusion of words, music, poetry and movement, emotionally coherent and crackling with life.

The story of the creation of West Side Story—of the gathering and collaboration of four difficult geniuses—is nearly worthy of a movie in itself, while the show's enduring, complex cultural influence deserves examination and study. Critic and scholar Misha Berson pursues both these goals in Something's Coming, Something Good: West Side Story and the American Imagination. To both her credit and shame, she succeeds in part.

The opening sections of Something's Coming provide a highly readable history of the show's decades-long genesis, with effective sketches of the principal creators and their artistic histories. Tracking the tangled and occasionally intersecting career paths of four restless artists over a 10-year period is no mean feat, but Berson manages it with clarity and ease.

After this promising beginning, though, the narrative is interrupted with analytical sections. Berson first runs down the characters and overall plot of West Side Story, recaps the book scene-by-scene, reviews each musical number in turn, then each dance sequence. The analysis is bolstered by the reminiscences and anecdotes of former cast members, but Berson does most of the heavy lifting in these sections. Her theater background puts her in good stead—her notes on the choreography are especially well done—vivid without being too dauntingly technical for the untrained reader.

But given that the songs, book and dance of West Side Story produce such a unified dramatic and emotional effect, Berson's choice to consider each element in isolation is unfortunate. It's bad enough that these chapters, considering the same material over and over from a variety of angles, are repetitious, but they add nothing to the body of criticism surrounding the work. Berson's descriptive writing is fine, but beyond a few parenthetical snipes at certain lines and plot points for being "rather schmaltzy," she doesn't present much in the way of critical opinion.

The book picks up some steam in the chapters on the making of the film version. I would question some of her conclusions—Berson's admiration for Jerome Robbins leads her to undervalue the work of the movie's co-director Robert Wise, himself a Hollywood legend—but the switch back into narrative mode is a relief.

Sadly, though, Something's Coming rides out in a welter of half-baked chapters meant to provide some sort of context for the themes and artistic impact of West Side Story. There's a point-by-point comparison and contrast with Romeo and Juliet; a brief chapter on depictions of juvenile delinquency in popular culture; another on the rise of youth-oriented musicals on Broadway; yet another on stage and screen treatments of bigotry and racism.

But there's no analysis of any depth in these chapters; indeed, they amount to little more than bullet lists of relevant films and plays. Misha Berson is both an academic and an award-winning critic and is surely capable of more penetrating insight than the material on offer here, which feels palpably dumbed down, presumably for the benefit of a general audience. The absolute low point comes in a chapter on "West Side Story in Popular Culture," with capsule summaries of various Saturday Night Live sketches referencing the show.

With West Side Story, four brilliant minds with radically different agendas created a unified piece that works effectively on multiple levels. As its lofty subtitle indicates, Something's Coming, too, wants to be more than one thing—both a populist history of West Side Story and an item of cultural criticism, a grand statement on "the American Imagination." But it really only holds up as the former. For while Bernstein, Sondheim, Laurents and Robbins were aiming high, daring great things and risking catastrophe in their quest to forge a new mode of expression for American musical theater, Berson pays lip service to a larger context but never really commits to her grand ambition, and substitutes list-making for cultural criticism. Something's Coming is halfway successful, but where it fails, it fails precisely for lack of trying.

As Critic-at-Large for Popdose, Jack Feerick is the top cat in town, the gold-medal kid with the heavyweight crown. The judge says he's depraved on account of he's deprived, but he claims he's not anti-social—only anti-work.