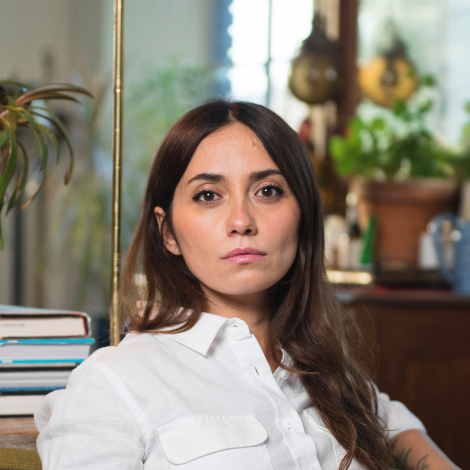 There’s no vocabulary for the longing that comes with that lack, so Shalmiyev set out to create one. Her memoir, Mother Winter, is an attempt to grapple with her mother’s absence and the hole it left in her life. “Even if plot is sometimes kind of a joke—it’s just time moving—we really are drawn to try to create some sort of a structure, some sort of a story,” she says. And yet, Shalmiyev’s story resists any neat resolution. She set out to find her mother but never succeeded; she’s proud of the book she wrote but doing so brought her no catharsis.

The book itself embodies many of these contradictions, as Shalmiyev tried to express the trauma she experienced. “You have to show the seams,” she says. “Some things are just unresolvable and I really wanted to show that in the writing.” She jumps between ideas and scenes, discussing the tragedy (and irony) of Carrie on one page before recounting a sex talk from her mother on the next.

That structure reflects how Shalmiyev wrote the book, jotting down notes in between caring for her kids or running errands and storing them in little baggies. Later she would dump them out and fit them together like puzzle pieces, moving ideas and phrases around until something clicked. Eventually, she realized these bits and pieces were coalescing into a book.

Throughout this process, Shalmiyev was determined not to write a memoir—she wanted to push back against the tradition where men get to write thinly veiled autobiographical novels but women are pushed to tell the authentic truth of their (generally very sad) lives. “The Henry Millers…get to be these cock-wagging serious bros sitting in cafes and writing novels, and yet Anaïs Nin wrote diaries—she’s just a lady who journals,” Shalmiyev says. Never mind that Nin was just as talented as Miller and made the money to support both of them.

Shalmiyev’s editor insisted that her book really was a memoir and needed to be sold as such, but it remains focused on her parental relationships, both literal and intellectual. Her childhood was shaped by the intense personalities of her parents: her alcoholic, irresponsible mother, her loving, dramatic, and violent father, and her cynical, determined stepmother. “The trifecta of them were this unholy, unhealthy, unparental, but very interesting, very loving, very cultured, very sensitive people,” Shalmiyev says.

Like many immigrants and children of immigrants, she felt an intense pressure to live up to her parents’ expectations, but she took after her mother in her unwillingness to conform. “My parents most certainly did not think that I was going away and was gonna just be into punk rock and do drugs and work at a peep show,” she says. No matter how much she appreciated the work her father put into raising her she couldn’t fulfill the good girl role laid out for her.

In place of her absent mother and authoritarian father, Shalmiyev turned to feminist writers like Marguerite Duras and Doris Lessing for inspiration. She was fascinated by the scope of possibilities they presented, from writing in the second person to being honest about sex to drinking too much. “I really wanted to show that women don’t have to be good,” she says. “We don’t have to be right… we don’t owe it to anybody.”