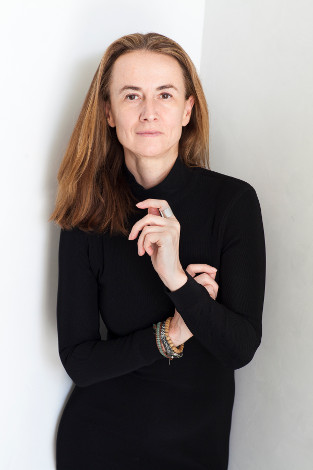 Stacey D’Erasmo captures the experience of an aging rock goddess so well, you’d swear she’s been on tour before. As a matter of fact, she has—through Europe by bus with pop-glam rock band Scissor Sisters—but strictly as an observer. “I’m utterly unmusical. I have no musicality and no musical aspirations, I never was in a band or wanted to be in a band or anything like that,” says D’Erasmo, author of Wonderland, her electrifying fourth novel.

Music crackles through Anna Brundage, the protagonist of Wonderland and an Amazonian redhead who readily seduced audiences in the not-too-distant past. “Fact: I was once a certain kind of famous for what was, in reality, not a very long time in most lives—perhaps four years, before I crashed, flamed, disappeared, walked away from Rome feeling like Godzilla, defeated by buzzing forces no one else could see, a squadron of tiny, blinding airplanes of paralyzing doubt,” D’Erasmo writes. Nowadays Anna teaches carpentry to private school students on New York’s Upper East Side, which satisfies in a quiet way but fails to sate her performance hunger.

D’Erasmo can relate. “Most of us aren’t rock stars, but I think we’ve all had those moments of, ‘Okay, now what?’ What happens to people who drop off scenes or dial back their involvement for years, and then they kind of come back in? That just fascinates me,” says D’Erasmo, a recipient of Guggenheim and Stegner fellowships who, by day, is an associate professor in the MFA program at Columbia University.

Anna launches a revival tour of Europe, christened at the Copenhagen commune known as Christiania with anonymous sex and a blazing set. “...I take a few breaths and spiral into the opening notes of ‘The Orchids.’ I am there. I blow the song through the back of the rickety concert hall and out into the night, folded, gleaming, fast, faster, unbroken, alive, whirling inside the secret chamber, rose and gold, unstoppable, irresistible, straight into the veins, hair-raising. I take another breath. I am the train, I am the tracks...” D’Erasmo writes. She’s still got that special thing that draws others in: charisma. “I’ve seen Patti Smith in concert and it’s just, like, overwhelming. That’s a gift I wish I had. It might be a curse as much as blessing, but it is an incredible thing when someone has that quality,” D’Erasmo says. “Prince at Madison Square Garden: unbelievable, all five-foot-three of him. All of Madison Square Garden, we would have done anything he asked us to do. Seriously.”

The one thing pure charisma can’t do is fund a tour. Anna sells a piece of art gifted by her famous father, a sculptor known for slicing a train and buildings in half. His influence on her art, her life is beyond financial, and she grapples with his decision to pack it in for a second family and second life in rural Vermont. Children of artists inspired D’Erasmo—Kiki Smith, the McGarrigle clan, Roseanne Cash. “All of these people grow up with some big artistic force within the family. Then how do you find your own voice?” she says. “What [Anna]’s trying to figure out as an artist is how do you get the courage to go on, and what is it that happens that kills your spirit and makes you stop?”

For many of Anna’s time, it was drugs. She’s kicked that addiction, but not another, a protracted affair with Simon, a Lebanese emigrant who lives mostly in Switzerland with his wife and kids. While the relationship is at times a source of deep sadness for her, Anna’s not to be mistaken as weak and wilting. “One of the things that I really really did not want was for her to seem as if the book was making the case that Simon was the bad guy and she’s the good guy,” D’Erasmo says. “She embarked on this fully aware and that’s you know that’s the price you pay.”

She continues, “One of the things that interested me in writing Anna is that she is a free woman. She’s a free character; she is determining her own fate. We’re used to reading about female characters who for one reason or another do not determine their own fate: They’re held back culturally, they’re held back in marriage, they’re held back for a million different reasons. She isn’t. She does make her own choices in this life, which is something that her outsiderness makes possible, but then all the consequences and the responsibilities are on her.”

For Anna, the rock star life is well worth the cost of admission, fulfilling her in a way that nothing else can. “This is a character who is fully engaged with her life and who gets a lot of joy out of love and work, and she’s happy at the end. She doesn’t know what’s going to happen next, but she’s happy,” D’Erasmo says.