Surrealist Art and an Eclipse Inspire a YA Fantasy Debut 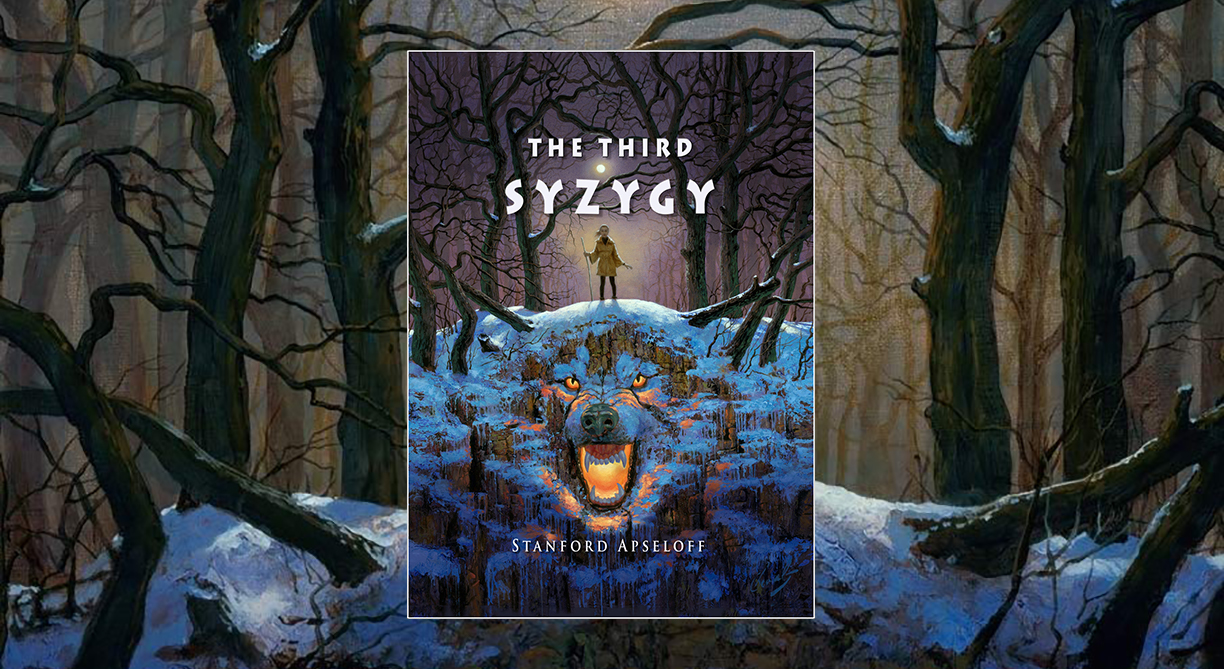 “When I wrote this book, I wanted it to be something more than just entertainment,” says Ohio-based writer/photographer Stanford Apseloff about his first young adult novel, The Third Syzygy. “My hope is that it provokes people to think about the time they have left and what they want to do with it.” He adds, “I think it’s important to be the person that you want to be instead of looking backward and having regrets.”

A collaboration between Apseloff and noted surrealistic artist Michael Cheval, The Third Syzygy traces the life-altering odyssey of teenager Laney from her real-world existence to a dark fantasy realm that tests her in ways she could never have imagined. The initially cynical Laney begins her transformative experience inside an off-limits museum gallery housing an upcoming exhibition of Cheval’s work. Strange paintings—music changing into butterflies, a woman and her violin dripping on the canvas “like honey,” a magician transforming a deck of cards “into doves in flight”—take on lives of their own. Laney’s reality shifts; she finds herself in a wintry wilderness, and soon she is unable to remember who she is or how she got there.

The Third Syzygy originated in a suggestion by another fan of Cheval’s art, Apseloff says, a retired film producer who felt that Cheval’s haunting characters and surreal imagery could be the basis for a screenplay. Cheval approached Apseloff, who had previously written two books about the artist’s work: Michael Cheval’s Dreams (2014) and Michael Cheval’s Magic (2019).

“I took a crack at it,” Apseloff says, “then realized that there are a gazillion screenplays out there and, more often than not, nothing comes of them.” He turned his screenplay into a novel, “an infinitely more difficult” but enjoyable undertaking. Cheval was onboard, providing the book’s atmospheric, black-and-white illustrations.

The title of the book and the key plot point it represents came together, Apseloff explains, after his viewing of the 2017 solar eclipse. Laney meets a woman who is convinced that the girl is the Sorceress of the West, part of a prophecy involving an impending syzygy, an alignment of the Earth, sun, and moon. If Laney can be in the right place at the right time, the realm will be saved from death and destruction. During the pair’s arduous and dangerous journey toward their destination, Laney struggles with odd memories of another life before gradually realizing that who she was isn’t as important as who she is becoming.

The shocking event that takes place when Laney returns to her present life further underscores Apseloff’s themes (and deeply held beliefs) that people have the ability to find their own truths through their choices and actions and that “ordinary people are capable of extraordinary things.” “Linking the fantasy quest to a frightening and all-too-plausible, real-world situation,” Kirkus Reviews observes, “is a smart move, deepening the resolution.”

Crafting his book around two females, Laney and her older companion, as his protagonists was Apseloff’s decision from the get-go. “In my favorite fantasy books,” he says, “the heroes are mostly men—or male hobbits. I wanted to write something that portrays a woman and an ordinary teenage girl as having those qualities, that same potential.” (Apseloff doesn’t have daughters, but he looks forward to sharing the book with his two sons: 6-year-old Ryan, whose namesake plays a key role in the book, and Evan, age 9. They’re curious about it, he says, but “Ryan’s too young,” and he prefers that Evan “wait a year or two.”)

Apseloff’s own work as a nature and wildlife photographer imparts a “you-are-there” quality to Laney’s trek through the novel’s setting of wild forest, deep valleys, mountain caves, rushing rivers:

Sights, sounds, and smells aroused Laney’s senses as if she were now truly awake for the first time—the feel and sound of crunching snow, the shimmering of sunlight, the slap of the cold breeze, the swirling of pine scent in the air. It all came with a ring of familiarity, yet each experience felt like the first, a moment to savor, like tasting a forgotten favorite food.

The author of two photography books for all ages, Imagine a Butterfly (2012) and Imagine a Puffin (2020), Apseloff takes his camera to far-flung locales, often roughing it with his identical twin brother, Glen. (A nightmarish pair of identical twin hags are among the characters Laney encounters in The Third Syzygy.) During a trip to the Pantanal wetlands of Brazil, the brothers waited for hours in a boat, enduring heat and swarming insects to capture images of jaguars. Their next joint expedition will be to Svalbard, a Norwegian archipelago in the Arctic Ocean. “We’re going to photograph walruses and polar bears,” Apseloff says. “Costa Rica, Africa, Antarctica—anywhere that has wildlife that’s really interesting, we’ll go.”

Apseloff’s life experiences have influenced The Third Syzygy in other ways. The survivor of two serious automobile accidents many years apart, Apseloff says his thoughts during those crashes became Laney’s: once during a near-fatal occurrence where she experiences the “sudden realization of the inevitable, when all choices disappear,” and then again during a fall from a great height, when “calm enveloped her—the cold disappeared, the sound of crashing trees vanished, and time melted like a Salvador Dalí clock.” (The reference to Dalí, another of Apseloff’s favorite artists, is one of several woven into the story.)

Apseloff’s love for surrealistic art and his ventures into wildlife photography and YA fantasy might seem unexpected for someone who holds business and law degrees, is a former management consultant, and is now the semiretired founder of a software company (Ohio Distinctive Software in Columbus, Ohio). In all of his pursuits, however, Apseloff says that he has found a creative component. The son of two English professors, Apseloff grew up in a home filled with books, art, and music, and “creativity has been the common element, the motivating factor in my life. It gives me joy.”

The Third Syzygy ends on an intriguing note, so intriguing that readers will no doubt be expecting a sequel. They may be in luck. Apseloff intends to let his idea for a second book “kind of gel and see where it goes. But I feel that there’s so much more I didn’t say in this book and so much more that I can do with these characters. I’d like to do that.”