The writer’s new book Stinkiest! isn’t stinky at all 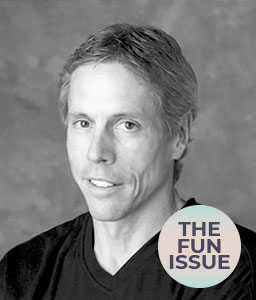 For an animal to qualify for the latest book in Steve Jenkins’ superlative series, Extreme Animals, required a true eureka moment—emphasis on you reek.

“Obviously, stinkiness was a requirement to get on the list,” says Jenkins, author/illustrator of Stinkiest!: 20 Smelly Animals. “Then there’s evaluating them by range and type—you don’t want all mammals or insects, you don’t want them all to be brown or red—so they’re diverse visually and taxonomically and use their odor for different purposes.”

Published in tandem with Speediest!: 19 Very Fast Animals, Stinkiest! features creatures that may use their odoriferous emanations to defend against predators or mark their territory. Some simply stink as a result of where they live or what they eat.

They range from the bombardier beetle, who “fires a stream of boiling hot liquid from its rear end to defend itself,” to the striped polecat—a sort of superskunk, related to a weasel—who “may be the worst-smelling animal in the world,” Jenkins writes.

“The spiny-tailed gecko lives in the branches of bushes and trees,” he writes in an entry entitled “Tangled up in goo.” “If it is in danger, it squirts a bad-smelling liquid from its tail. This liquid turns into long, gooey threads, like a smelly spider web. These threads stick to an attacker and give the gecko time to escape.”

This brief biography is accompanied by infographics showing where the gecko lives (“central and northern Australia”) what it eats (“ants, crickets, other insects”), and a fun fact (some people keep them as pets!).

Little stinkers, like the gecko, are shown in relation to the size of a human hand; for larger animals, it’s a human body. Each is presented in a gorgeous cut-paper collage illustration made by Jenkins with an X-acto blade.

“Flipping through, I kind of like the European roller [best]—the bird that’s barfing,” says Jenkins, who makes some of his own textured, variegated papers but sources most from Japan.

The collage is so well-reproduced, it seems like you could run your finger across the page to feel the layers of the bird’s beak. Meanwhile, you’re glad its vomit isn’t scratch and sniff.

“There’s a whole genre of books with titles like ‘Yuck’ and ‘Gross,’ ” Jenkins says, “which I’ve always been kind of resistant to.…A lot of times yuck or gross is our interpretation, but it may not be the creature’s intent—sometimes they smell bad and they find it attractive, or smell bad to us. But in this book, you probably could say that most of these odors are intended to be offensive.”

Ingenious, ingenuous, and icky (in a good way), Stinkiest! is “excellent nonfiction that has the potential to make reluctant readers beginning bookworms. Not at all stinky!” according to Kirkus’ critic.

“I’m hoping it creates an interest in the natural world,” Jenkins says, “and inspires kids to look a little more closely at things. There’s a general tendency, I find, in books about…animals, that there are certain ‘poster creatures’ that get used over and over and over again.

“If you don’t give it too much thought,” he adds, “you develop this image of the world: There are lions and elephants in Africa and zebras, maybe. But there really are all these incredible, unfamiliar, and extraordinary animals. I guess that’s another goal—to convey that sense of how incredibly diverse life is.”