A Stop Along the Underground Railroad: Henry Cole's 'Unspoken' 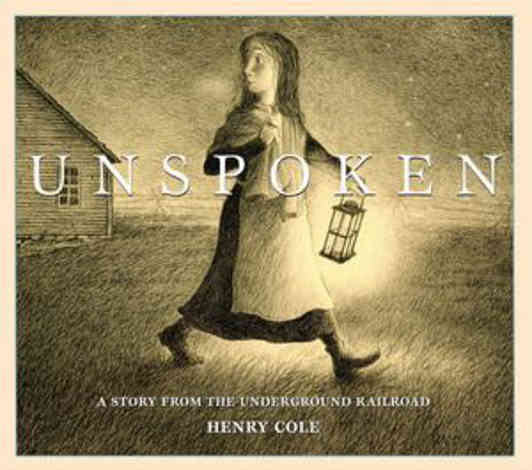 The cover of Henry Cole’s newest picture book, Unspoken, is beautiful. He’s rendered this entire book in pencil art, which I find to be such a powerful medium; the play of light and shadow on this cover, and throughout the book, is striking.

But turning the book over provides even more chills with a close-up of a child’s face and the words: “What would you do if you had the chance to help a person find freedom?”

That’s precisely what the young protagonist in the book, whose face appears on the back cover, looks to answer. Sub-titled A Story from the Underground Railroad, this is a wordless book about a Civil War-era girl who discovers a runaway slave hiding among the cornstalks in a storehouse on her family's farm.

As the book opens, we see the young girl doing daily chores on the farm, her cat always by her side. She pauses to watch some Confederate soldiers pass and then gets back to her chores. In one spread, we see her mother (or grandmother) standing in the doorway of the home on the farm, watching the girl from a distance. On the next spread, she hands the girl a basket, and it’s worth noting the concern on the woman’s face.

Does the family know—before the girl does, that is—about the fugitive hiding on their land? Observant readers will note in the background a quilt hanging on the fence. Could this be a part of the so-called “Quilt Code” of the Underground Railroad, the family communicating to conductors (who moved passengers from place to place) that this home was a safe haven? Cole doesn’t mention this in his Author’s Note, but with a close look at the facial expressions of family members, readers just know.

When the girl enters the storehouse, she sees someone hiding in the cornstalks. Cole never reveals the child; readers see only an eye staring out; clearly, this slave is terrified. The girl runs in fear back to her home, and she never says a word to her family but keeps returning, bringing food to the frightened slave.

Soldiers appear at the home, waving a wanted sign. It’s on this spread that readers most suspect the family is in on the secret. This is moving stuff, the resigned look on the face of the family patriarch and the worried, yet stubborn, looks on the faces of the women—all as the girl hides, probably knowing her face will betray the truth.

One chilling spread shows the slave’s eye peering out through a hole in the wall of the storehouse,  watching the soldiers, wondering about his (or her) fate.

If I reveal the ending, I may ruin the entire experience of this book for you, so I shall not!

A haunting tale of benevolence and goodwill, this is a Fall picture book release that is not to be missed.

Julie Danielson (Jules) has, in her own words, conducted approximately eleventy billion interviews and features of authors and illustrators at Seven Impossible Things Before Breakfast, a children's literature blog primarily focused on illustration and picture books.

UNSPOKEN: A STORY FROM THE UNDERGROUND RAILROAD. Copyright © 2012 by Henry Cole. Spread reproduced by permission of the publisher, Scholastic, New York.