Stop Doing That, and Other Thoughts on Modern-Day Manners 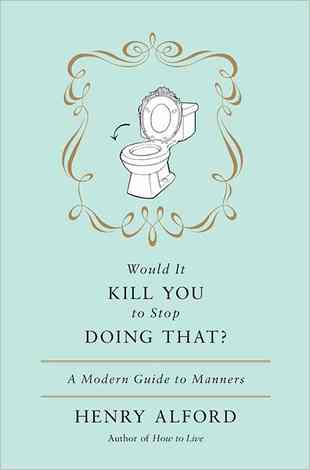 Miss Manners has nothing on Henry Alford, the acerbic New York essayist whose new guide to manners, Would It Kill You To Stop Doing That?, was recently excerpted in Vanity Fair.

However, she is one of the many figures quizzed by Alford about the tricky business of post-modern civility, as well as Tim Gunn and New York City tourists. In a tome we dubbed “an idiosyncratic excursion into the land of civility,” Alford acidly waxes poetic about personal space, workplace etiquette, the tricky virtual landscape of social media, and other pitfalls between wickedness and discretion.

Would it Kill You to Stop Doing That? doesn’t easily lend itself to labels. How would you characterize your new book?

It’s half essay and half investigative humor, the latter being a term my publisher coined for the participatory, shoe leather-intensive kind of journalism I often traffic in. It's a rant AND a gambol.

On the former front, I invoke Samuel Johnson's "manners are fictitious benevolence." I argue that good manners are not elitist. I posit that all these forms of new media like Twitter and Loopt bespeak our cloddishness, not our sophistication, about talking to each other.

On the latter front, I wage a "reverse apology" campaign. I become an online etiquette coach. I teach bad, New York City-style manners to foreigners who are visiting New York.

In an age when incivility seems to be running rampant, what made you feel the citizenry needed a not-so-gentle reminder to mind their manners?

It started with my reverse-apology campaign. When a checkout person at my grocery store dropped my apple on the floor and then promptly put it my bag, I said to her, "I'm sorry," to which she had no response. So I said, "I didn't mean for you to drop my apple like that," and again: no response.

I kept this up for a month with various offenders, and no one would cop to being the guilty party. I realized that we rarely think that we ourselves have bad manners—bad manners are something “other” people have. So I decided I needed to take stock of my own bad manners and of other peoples' unwitting bad manners.

You’re noted for your investigative forays into your subjects. Which experiments yielded the funniest results this go-round?

I'm partial to the priest who told me that the only appropriate response to being asked how much a mass will cost is, "The passion and death of Jesus of Nazareth, the God-human." I love the person who said of the act of hitting “Reply All” on a group message only to write "Gotcha" or some such, "That is like a pixilated version of a styrofoam peanut." And the foreigners who I taught bad New York City manners to in my capacity as a tour guide were great—like the German woman who said, "So it is a game of dirty poker that you play!"

The new book draws observations on courtesy from characters ranging from Oscar Wilde to Tim Gunn. Who gave you the biggest “a-ha” moment during the writing process?

I'd say the biggest rattler for me was the homeless guy who I gave some advice to about panhandling in Penn Station. He'd been walking up to people directly, which I thought was a little intimidating, so I encouraged him to stand in a big, open space. I left him alone for about 10 minutes, and when I returned to him, he was beaming. Holding up a dollar bill and pointing to its presidential portrait with his index finger, he said to me, triumphantly, "George!" That's when I realized that advocating good manners [i.e., me telling him where to stand] could be a form of activism.

You find yourself in some rather unusual social situations. How does your experience in your own social circles translate to observations on grace and civility?

I'm amazed at how often I go to a gathering of 20 or so of someone's friend's at his house, only to have the host fail to introduce any of us to one another. This has made me a somewhat frantic introducer of people, not to mention someone who is constantly trying to fluff the wallflowers and sociopaths.

You admit that you yourself have some truly appalling habits. What do you suppose is the most common misconceptions among Americans when it comes to good manners?

We don't introduce our friends to one another if we invite more than, say, 15 of them over at a time. We think that loudly shushing someone in a theater is making the situation better. We don't RSVP no, which, if people are being invited in waves, keeps someone else from being invited. We answer phone calls with e-mails, and e-mails with Facebook messages. We blab about parties that our interlocutors should have been, but weren't, invited to. We don't ask people about food allergies before having them over for dinner. We suggest macrobiotic diets to cancer patients as if to say, "You got cancer because of what you eat."

Your last book elicited the wisdom of our elders. What life-changing lessons could one take away from Would It Kill You to Stop Doing That?

Maybe the takeaway here is, small is big. I write that recall—being able to invoke, months or even years after it was said, a witticism or an interesting comment someone made—is one of the loveliest manners you can have. Or remembering, say, that a friend or colleague's loved one is having surgery tomorrow. Being able to summon up this information and proffer kind words: it seems tiny, but to your interlocutor, it's huge. Edmund Burke wrote, "Manners are more important than laws." Ol' Ed was onto something.