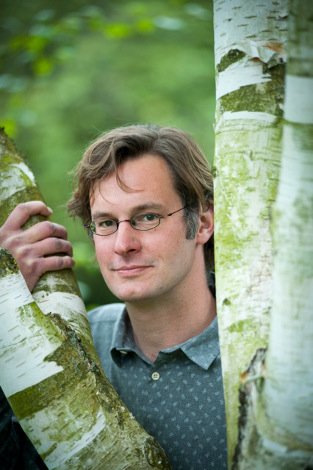 Brian Kimberling is a true magpie. “I am a collector of experiences,” he explains, talking about his debut Snapper, a collection centered around an amateur birdwatcher and the state of Indiana. “Some are my own observations or memories. Some are details from stories that I re-imagine. Some are just anecdotes based on my friend's old car."

In a breath, Snapper is just that: a series of non-sequential vignettes bound by the protagonist Nathan Lochmueller, an accidental birdwatcher, keen observer and droll cynic. Lochmueller is a sponge, ready to absorb the insane cast of characters, settings, and circumstances Kimberling throws at him: sadistic warblers; an aggressive turtle with a propensity toward snapping at appendages; “Thong Thursdays at Fast Eddie’s”; a broken-down truck called the “Gypsy Moth”; tornadoes (“a proper Indiana twister looks something like God got fed up with his spinach”); an unfaithful, ever-elusive, and fleeting love interest; eccentric, politically-incorrect Midwesterners; and conversations ending in the question, “When was the last time you got blind drunk?” Basically, Snapper falls somewhere between a tall tale and a modern country love song.

Kimberling and Nathan are not too dissimilar: Kimberling spent two years as a birdwatcher in the mid-90s as a research assistant in the Indiana woods (“I actually spent most of my time reading books,” he admits). Snapper is partially a recollection of his own experiences, but mostly an imagining of those he wishes he'd had. "The book is more of a strange dream than an autobiography," Kimberling explains. "The truth is, I wasn't a very good birdwatcher, and I was dead jealous of the people who were. I was so impatient. I just loved walking around in the woods."

Where Snapper stops being a collection of weird stories and starts being something bigger is in the moments when Kimberling alludes to the complex allure of the Midwest. Just as easily as Snapper can be read as a comedy, it is also a book full of longing, the isolation that comes from living in a “flyover” state, and the complexities that arise when you’re self-aware about existing within a culture whose idiosyncrasies few will ever understand. Currently living in England after time spent in Turkey, Mexico, and the Czech Republic, Kimberling is used to questions about ‘What’s it like out there?’ "People expect me to show up in a coonskin cap," he explains of his own upbringing in Southern Indiana. Nathan’s narrative, he says, in many ways was intended to convey the “strangely romantic” aspects of Indiana, despite his protagonist’s general cynicism about his surroundings (“if Indiana is the bastard son of the Midwest, then Evansville is Indiana’s snot-nosed stepchild,” Nathan notes in the second story). Kimberling’s true observations emerge in his subtle observations: colloquial conversations about small-town politics, the relief of catching a breeze at the top of a trail, the warmth of November sun, a symphony of birdcalls shattering the silence of pristine woodland.

On Kimberling’s personal blog, he excerpts a bit from Malcolm Cowley’s introduction to Sherwood Anderson’s groundbreaking Winnesburg, Ohio. It reads:

“American folk tales usually end with a “snapper” — that is, after starting with the plausible, they progress through the barely possible to the flatly incredible, then wait for a laugh. Magazine fiction used to follow — and much of it still does — a pattern leading to a different sort of snapper, one that calls for a gasp of surprise or relief instead of a guffaw. Anderson broke the pattern by writing stories that not only lacked snappers, in most cases, but even had no plots in the usual sense. The tales he told in his Midwestern drawl were not incidents or episodes, they were moments, each complete in itself.”

Kimberling says he didn’t discover the quote until after Snapper was complete; accidental or not, it’s a perfectly articulated description of the book’s effect. The disparate vignettes don’t tell an entire story, and they aren’t intended to. Instead, they fulfill the magpie’s ultimate goal: a group of pieced-together solitary moments that work together to tell a single experience.

Leigh Patterson is a writer and the creator of Synonym Journal.